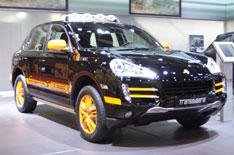 Porsche added a splash of colour (well, black and orange) to the Paris motor show, in the form of the special edition Porsche Cayenne Transsyberia.

The car celebrates Porsche's success in the 4400-mile rally in recent years, which includes taking the top six places on this year's event.

Power will come from the 399bhp 4.8-litre petrol engine in the Cayenne GTS, which will be linked to a six-speed automatic gearbox. The 0-60mph time of 6.1 sec is 0.5s quicker than the standard Cayenne S.

Extra features over the standard car will include 18-inch wheels, a rear spoiler, skid plates and air intake slats. Roof-mounted lights will be a no-cost option, as are Transsyberia decals on the doors, mirrors and rear spoiler.

There will be a choice of distinctive colour schemes, including black and orange, silver and orange, grey and silver and black and grey. The exterior paint colours will be carried through to the seat designs inside the car.

Prices have yet to be announced, but deliveries in the UK will begin in January.