More for you |
What Car? Real Range: which electric car can go farthest in the real world?2020 Hyundai i20 small car revealed: price, specs and release dateRanked: The most reliable executive cars - and the leastFord Focus ST long-term test reviewCar recalls: what are they and what to do if your car is recalled
Home
News
Top 10: The best used Toyotas
news

What Car?’s guide to the best Toyotas on the used market... 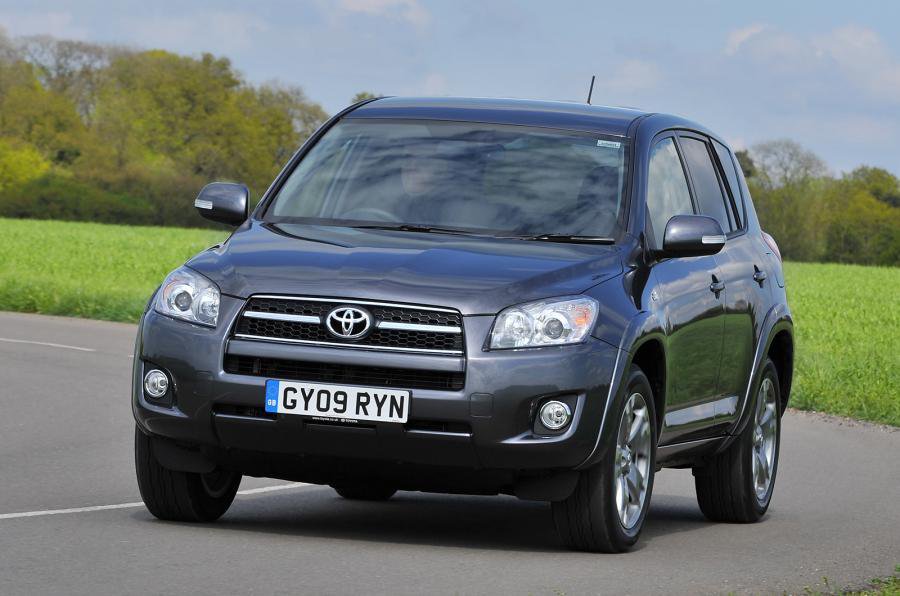 Toyota has a large range of used cars on the market. There are many good deals to be had, so we're giving you our top 10.

The RAV4 has been Toyota’s small crossover since 1994 and comes with a decent range of diesel engines, high ground clearance and 4x4 system.

Reliability is good, the car is practical, and it's cheap to run, with an average fuel consumption over various models of 40mpg. Go for the 2.2 D-4D T140 XT-R.

What to look out for: Due to the soft paintwork on older generations of the RAV4, the nose and bonnet can often be chipped or scratched. Be on the look out for such damage, or for any poor repair work, too.

The Toyota Verso MPV is a modern, versatile seven-seater, which has plenty of space for luggage as well as the full passenger capacity. With great build quality and five-star NCAP rating, it's a good family car.

Go for the 134 bhp 2.2 D-4 model. The engine is punchy enough to deal with a full passenger load and all their luggage but is economical, too. Try to steer clear of the petrol engines; they are on the thirsty side and don't have the pulling power of the diesels.

What to look out for: There were some recalls early on due to airbag issues, so make sure to check with the dealer that all safety standards have been complied with.

A practical vehicle for the family, the Toyota Avensis Tourer has fantastically large boot and plenty of room in the cabin. The Estate is harder to come by than the hatchback, but thanks to the Estate's huge load space and squared off boot, they're certainly worth looking for.

We recommend the 1.8 VVT-I T3-X model for its flexible, capable engine. There are plenty of examples of good-quality Avensis Estates available, with many to be had for less than £12,000.

What to look out for: Frequent appearances in the JD Power Customer Satisfaction Survey suggest the owners of these cars are generally happy. There have been some recalls due to factory faults with the car, so make sure that any faults have been rectified.

Much like the Estate, it's practical and well-built. The Toyota Avensis saloon has a decent helping of safety kit and has a five-star NCAP safety rating.

The 2.0 D-4D T2 is the one we'd go for because the 114bhp diesel has a smooth ride and effective pulling power, and there are plenty of cars in good condition for less than £5000. Petrol engines in the Avensis line-up tend to be on the noisy side, so are best avoided.

What to look out for: A few reports of clutch failure at around 10,000 miles have cropped up, so a full service history, or a deal with included warranty may offer some peace of mind.

The size and build of the Toyota Land Cruiser, combined with impressive off-road technologies such as hill-start and hill descent, makes it a 4x4 to be reckoned with. Its on-road manners mean it’s more suited to heavy off-roading than the school run. It’s well-equipped across the range though, with a luxurious interior to boot.

We suggest looking for the 3.0 D-4D LC3 model. The Land Cruiser’s sheer size means petrol engines are incredibly thirsty, so the 3.0-litre diesel is adequately powerful while not breaking the bank.

What to look out for: There really isn't much to report for the Land Cruiser. It consistently performs well on the JD Power Customer Satisfaction survey, and reports from owners are pretty much always good, apart from the occasional minor hiccup.

Toyota's answer to the MX-5. A whole lot of open-air fun for very little money, the MR2's mid-engined layout gives it a superior weight balance allowing for great cornering.

There’s only one engine, the 1.8 VVT-i, but two choices of gearbox. Go for the five-speed manual – the sequential manual transmission, Toyota's crack at a Formula One style engine with no clutch – is inferior.

What to look out for: Take a good overall check of the car, but the MR2 lives up to Toyota's good name in reliability. Take time to check for crash damage, and track day use.

This sporty coupe was designed with speed in mind; it's great to drive on both open roads and tight city streets. Despite having rear seats, the Celica’s swooping shape makes these too cramped for use.

There aren't many to choose from, but we suggest you go for the 1.8 VVT-i with 140bhp. There is a more powerful 190bhp engine, but it isn't worth the extra money.

What to look out for: Check for rust on the brake discs and collapsed tailgate struts.

Small and practical supermini. Despite the fact it's shorter than many cars in its class, the Yaris has a good amount of room in the cabin, and has a five-star NCAP passenger safety rating.

The 1.3 T3 5dr is the one we'd get. Its feisty engine is the most popular of the range, and is very economical with an average fuel economy figure of 50mpg. The T3 model also comes with decent standard kit, including keyless entry and start, and an upgraded CD player.

What to look out for: The Yaris has been less reliable than other Toyota models, with a some complaints of little niggles with the engine and gearbox such as juddering and slipping.

Practical, sturdy and reliable, the Auris hatchback makes for a capable family car. Although uninspiring to drive, the Auris is well put-together and should pose no reliability problems.

What to look out for: The manual version has had far fewer reported problems than the automatic, but check to see what is covered by the warranty as you may find some trouble with the clutch at some point.

Toyota’s city car was produced alongside the Citroen C1 and Peugeot 107. It's completely at home in town and it's cheap to insure and repair, although it’s less refined than we’d like, and comes up short on passenger and boot space.

Go for the 1.0+ – the small perky engine is perfect for this car. Steer clear of diesel versions.

What to look out for: Not much. Small niggles can emerge but there's nothing major to worry about.