Despite having a bigger backside than the regular Panamera, the Sports Turismo matches it for acceleration on paper. We suspect keen drivers will love the performance and rev-hungry nature of the 2.9-litre V6 petrol engine in the Sport Turismo 4S. It’s by no means the fastest version, but it’s arguably the most satisfying and is still capable of 0-62mph in as little as 4.2sec. It’s so good that it makes the V8-powered GTS seem somewhat pointless, because it’s barely any faster outright despite costing a lot more cash. Then again, we suspect many will prefer the additional low-down flexibility and V8 roar of the GTS.

For those seeking ultimate speed thrills, there are the Turbo models. The standard Turbo’s 542bhp means it’s more than capable of embarrassing some supercars, but if that’s not enough to brag about, there’s the range-topping Turbo S E-Hybrid. Now, we’re used to hybrid technology being deployed to deliver better efficiency — indeed, the Turbo S E-Hybrid will do up to 23 miles (one less than the coupé) using just its electric motor — but here Porsche uses a 134bhp electric motor to boost performance, too. With this alongside the Turbo’s 4.0-litre twin-turbo V8, 0-62mph takes just 3.4sec and the top speed is a whopping 192mph.

Two other Panameras are available: the entry-level 2.9-litre non-S petrol and the 4 E-Hybrid. We’ve only driven the latter so far, and it’s again plenty quick enough, at 4.6sec from 0-62mph. The electric motor boosts low-end shove so you don’t have to work the engine particularly hard to make good progress. It will also manage a claimed 24 miles (three less than the coupé) on electric power alone. Acceleration is far gentler on electricity than when the petrol engine is running, but is enough to keep pace with traffic.

Be in no doubt, then, that with just a flex of your right foot, all the engines are capable of flinging you up the road at great speed. Yet there’s something about the refined way the Sport Turismo delivers its prodigious turn of speed that leaves you barely aware of how fast you’re going – until you glance down at the speedo, that is.

An eight-speed dual-clutch automatic gearbox is standard, with no manual option available. It proves smooth under normal use yet is capable of rapid shifts and instant response when in its sportier driving modes. Some jerkiness around town lets it down, and this is worse in the hybrid models when the integration of their electric and petrol engines appears to unravel, leading to the odd thud or jolt.

All models in the range come with four-wheel drive as standard, ensuring that the power reaches the road effectively, even in the trickiest conditions. An optional four-wheel steering system improves low-speed manoeuvrability, agility in fast corners and high-speed stability. It’s very good, but even the standard steering is accurate, beautifully weighted and delivers precise control, making the Sport Turismo utterly confidence-inspiring to drive.

For the best handling, go for the 4S. Having a lighter V6 engine up front means it changes direction more eagerly than the heavier V8 in the GTS and Turbo models. The Turbo S 4 E-Hybrid feels even heavier still, due to its electric gubbins. And while it’s technically a quick car through corners, it’s not that much fun. Get behind the wheel of the lighter if not quite so potent Mercedes-AMG E63S Estate, for instance, and it will produce bigger smiles for keen drivers.

In fact, the lighter V6 of the regular E-Hybrid helps it feel more nimble and enjoyable on a winding road, if not quite as agile as a regular 4 or 4S. Still, it’s one of the most entertaining plug-in hybrids you can buy, winning best performance plug-in hybrid in our 2020 Electric Car of the Year Awards.

So far, we’ve tried the Sport Turismo only on its optional air suspension (mechanical springs and adaptive dampers are standard on standard and S models). The ride is firm but incredibly well controlled across heavily undulating roads and calmer at motorway speeds than the more aggressively sprung AMG GT 4-door Coupé or E63S. Around town, however, the Panamera thunders over the really nasty ruts and ridges. If you prefer a softer ride over tighter handling, a more conventional performance estate such as a powered-up Mercedes E-Class or BMW 5 Series Touring will be a better bet.

Wind noise is well contained, but the Panamera’s giant, garden roller tyres generate a fair bit of road roar on coarse surfaces. Nothing like as much as the GT 4-door Coupé does, though. It’s also worth mentioning that while the optional carbon ceramic brakes are exceedingly powerful, they can be hard to modulate at the very top of their travel, something that’s also true of E-Hybrid models due to their regenerative braking systems. 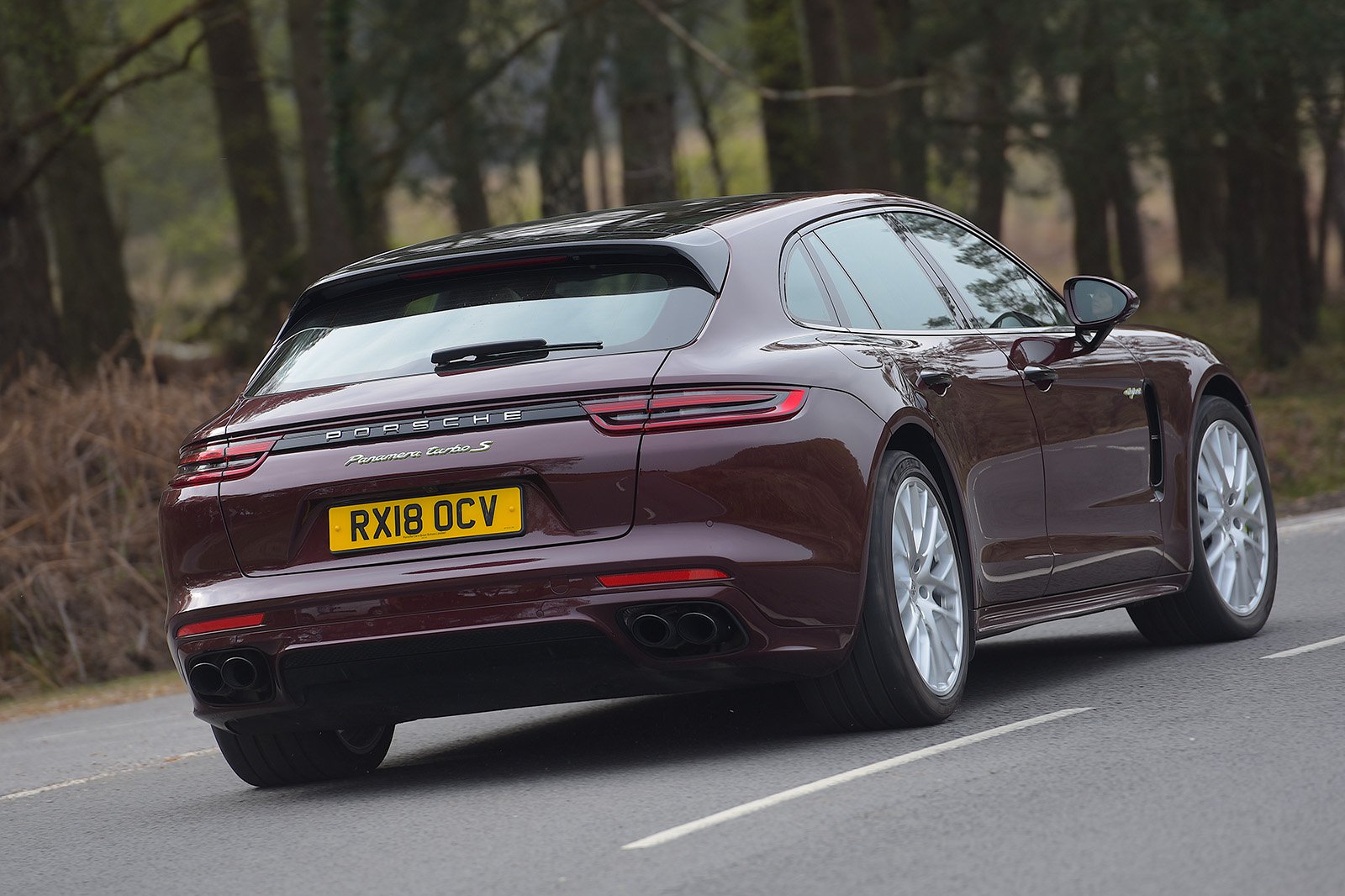