The RS6 has a clear USP, but one that could make you love or loathe it. And what’s this Marmite marker, you might ask? If you're looking for a serious turn of speed, minus any savagery – that is, something that's not uncomfortable or overtly challenging to drive – then it's one of the best performance car options out there. The trade-off is that it's less fun than more banzai competitors such as the BMW M5 Competition and Mercedes-AMG E63 S.

Indeed, you could be forgiven for thinking you’re driving a standard Audi A6 Avant, right up until the moment you squeeze the accelerator. Under the bonnet lurks a 4.0-litre twin-turbo V8 petrol engine that is capable of dispatching a mighty 592bhp and 590lb ft of shove. Being an Audi quattro, this goes to all four wheels through an eight-speed automatic gearbox. The results are rather punchy: 0-62mph in 3.6sec, 0-124mph in 12 seconds and an electronically limited top speed of 155mph. If that's a bit puny for your tastes, there's an option to have the limit increased to 174mph, or have Audi whip off the restrictor altogether, so it'll top out at 189mph.

And it is absolutely rapid, that's for sure, with effortless overtaking ability with only a quick prod of your right foot. Yet despite all its prodigious poke, it doesn't feel as quick in a straight line as the E63 S. We proved as much on a private test track, when we timed the RS6 Avant against the E63 S Estate; the E63 S knocked 0.3sec from the RS6's 0-60mph time and 0.6sec off its 0-100mph rate. That's a lot, if only in bragging rights down the pub.

It's not simply the way the RS6 accelerates that’s outshone by the E 63 S, though. It makes a good noise, the RS6, but even with Audi’s optional RS Sports Exhaust system fitted, it's more mellifluous, like a snoring grandpa, than a rip-snorting lunatic. Again, if you're after something discreet, that might well be a plus point, but anyone looking for a proper, grin-inducing beat will find the E63 S more apt. Its raucous spitting and snarling is a show of civil disobedience, but one that will almost certainly make you grin.

That theme continues through to the handling. The RS6 is extremely surefooted, grips really well and steers confidently. In fact, with its standard rear-wheel steering, which is designed to help tighten its turning circle at town speeds as well as increase its stability on faster roads, it's as easy to drive in tight car parks as it is reassuring to drive quickly on flowing B-roads.

But despite also being four-wheel drive, both the M5 and E 63 S have more playful handling. You can use their power to make them wriggle safely with a little rear-end slide out of corners, if the mood takes you. Indeed, on a track you can turn off their four-wheel drive and unleash their power to the rear wheels alone – if you really want to up the ante and the sideways antics. You cannot do that in the RS6. Of course, that won’t make the blindest bit of difference for day-to-day use, but it's a clear pointer to the differences in philosophies between the RS6 and its rivals – the M5 and E63 being more focused performance cars.

It’s why the RS6's gearbox isn’t quite as snappy as the E63 S's, because its slightly slower gearchanges are less perceptible and increase comfort. Speaking of which, pop the RS6's drive mode selector to the Comfort setting and the standard-fit air suspension – or the more focused optional adaptive Audi RS Sport setup – is supple and compliant. Both suspension configurations even work well with the huge 22in alloy wheels that are available and offer much-improved comfort, particularly on bumpy town roads, over the M5 and E63 S. At motorway speeds, the RS6 is really ace with its calm ride and its ability to keep wind and road noise at bay – something that the noisy E63 S is particularly poor at.

Audi has emulated at least one aspect from a rival, though. Just like the M5, there are two convenient buttons on the steering wheel (named RS1 and RS2 in Audi's case), which add a feeling of purposeful intent when you want a bit more engagement. You can program these with your desired options for the aggressiveness of the steering weight, suspension stiffness, gearshift speed, stability control intervention and accelerator response, and recall them at will. 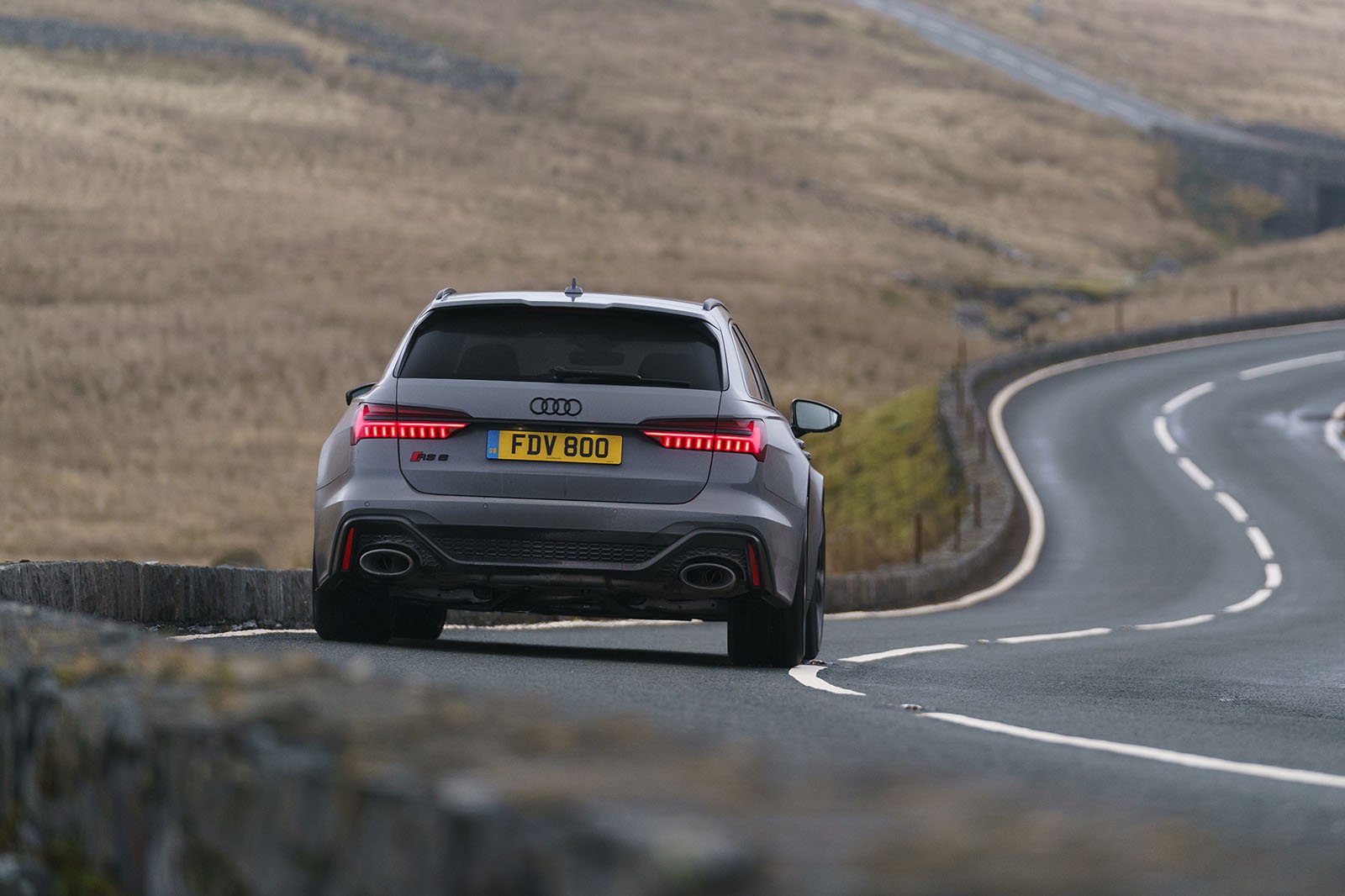 The CLA 45 AMG is seriously rapid and, in estate form, surpris...