Range Rovers are one of the tallest cars on the road – if you like looking down on people – and known to be comfortable long-distance cruisers. It’s certainly easy to get set-up perfectly behind the wheel. For a start, the steering wheel adjusts up and down as well as in and out electrically, and even the entry-level Vogue has 20-way powered seat adjustment, including four-way variable lumbar support and a memory function. Step up to Autobiography trim and you get a 24-way seat with a massage function.

A subjective point, depending on your build, is that you might find the seat squab doesn't angle down enough, so the leading edge presses slightly into the underside of your thighs. Otherwise, it's is soft and comfy, and aligned perfectly with the steering wheel and pedals.

All models of the Range Rover get digital dials behind the steering wheel that are clear, but they're more fiddly to configure than the similar system in the Audi Q7. To help reduce the need to take your eyes off the road, a clear head-up display is a cost option on all trims. Thankfully, the temperature controls are good old-fashioned rotary dials, although the rest of the controls are dealt with by the lower of the car’s two touchscreens; we'll discuss these further in the infotainment section.

It’s a bit of a climb up into a Range Rover but, once you’re there, its huge windows give you a fantastic near-360 degree view. That helps you to define where the car’s extremities are, so, despite it being five metres long, you’re able to thread the Range Rover accurately down narrow lanes and into parking spaces.

Of course, the Range Rover’s key appeal is that you sit far higher from the road than you would in the vast majority of cars. Beyond the one-upmanship it means you get a fantastic view of the road ahead. A rear-view camera is standard on every model, as are front and rear parking sensors, while the options list includes a 360-degree camera system and semi-automatic parking (standard from Autobiography trim and up).

Matrix LED headlights, which can remain on main beam without blinding the cars in front, are also standard, and you can upgrade those to Pixel units (again, standard on Autobiography) with more LEDs for finer beam control. Pixel-Laser LED lights extend the reach of the main beam and are standard on SVAutobiography trim, but we'd argue that the standard lights are plenty good enough. 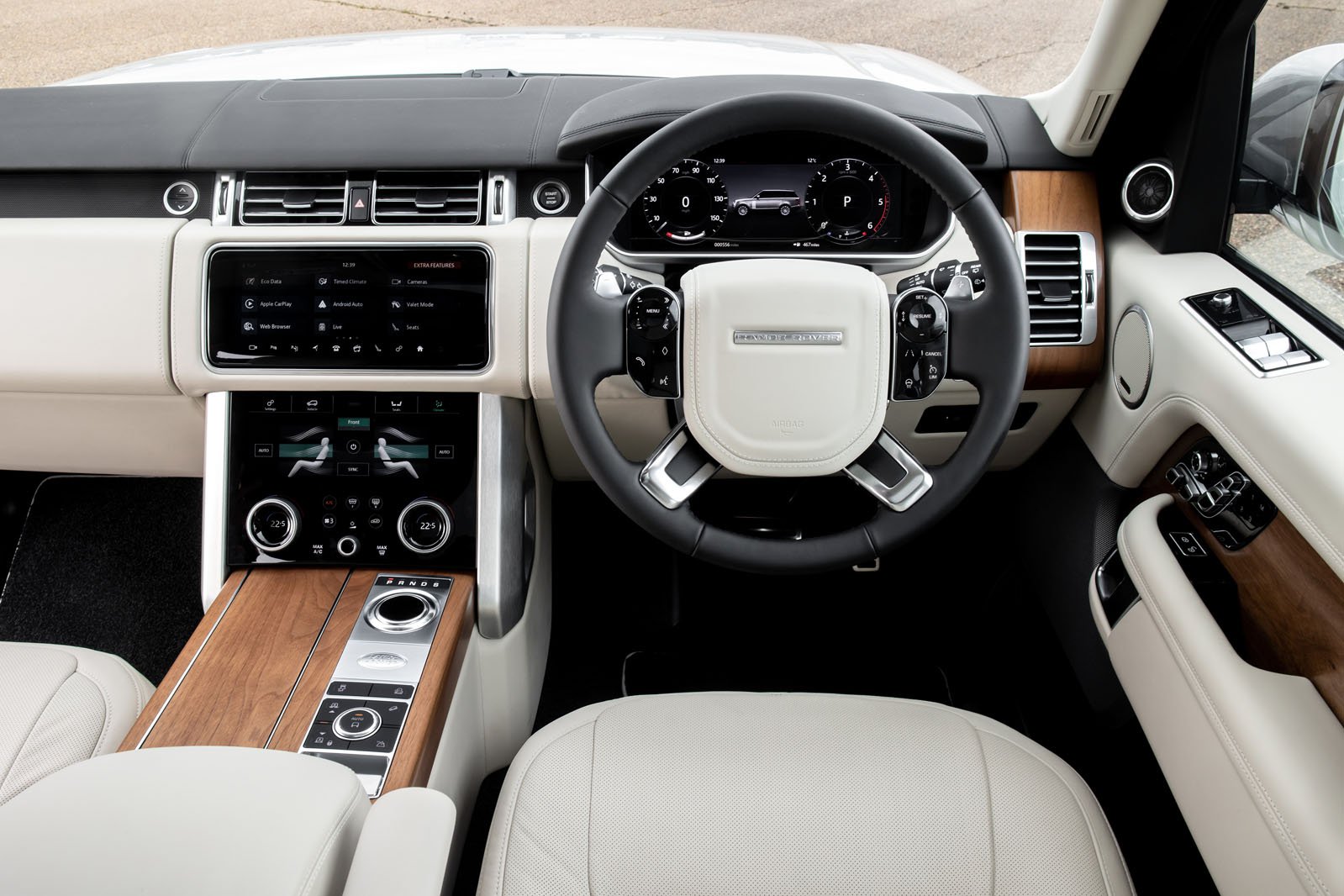 All Range Rovers have a pair of 10.0in touchscreens. One is where you’d expect it to be, towards the top of the dashboard, and the other is just below, in front of the gear selector. This lower screen is used to access the air conditioning and off-road modes, but you can also use it to operate the multimedia system while the main screen displays something else, like the navigation.

This setup gives the interior a minimalist, high-tech look that’s certainly appealing, plus both screens have sharp graphics, but there’s the occasional lag when you select something on either screen. And, while their menus prove reasonably easy to navigate when you’re stationary, using both screens while you're driving can be quite distracting due to the number of functions they cater for. The Audi Q7’s twin-screen setup is just as distracting but a bit more responsive.

Thankfully, there are two physical rotary switches on the Range Rover's lower screen. They allow you to change some functions by feel alone, but it would be far better to have the BMW X7's iDrive rotary controller that does everything. That's by far the best system in the class; you'll even find a modified version of it in the Roll-Royce Cullinan.

Entry-level Vogue trim includes Apple CarPlay, Android Auto, a DAB radio, Bluetooth connectivity and a digital TV receiver. The Vogue SE has a more powerful 825W surround-sound system (the standard car gets a more humble 380W set-up), while the SVAutobiography model features a 1700W Meridian audio system and, if you specify the long-wheelbase model, rear entertainment screens. Both are options further down the range.

The Range Rover may be an all-conquering SUV with a taste for the wild outdoors, but don't expect its interior to appear even slightly utilitarian. In fact, car interiors don’t get much more luxurious than this; the craftsmanship is of an extremely high standard and everything you see and touch is made from top-drawer materials.

Leather seats are naturally standard with a better-quality aniline hide featured from Vogue SE trim, and there's a range of attractive veneers to complement the colour of your upholstery. So, why not five stars? Well, the X7 or Q7 might not be quite so indulgent, but their fit and finish is even better, while the Bentley Bentayga and Rolls-Royce Cullinan are even more indulgent.