Although the Mercedes-AMG C63 S is slower against the clock than the Alfa Romeo Giulia Quadrifoglio (QV), Audi RS4 Avant and BMW M3, it’s big on theatrics, and that arguably makes it a lot of fun for everyday use.

Start the big V8 petrol engine and it thunders away like an old American muscle car, even more so when you switch on the standard sports exhaust. It sounds heroic when it’s simply dawdling along in traffic (or even just navigating a multi-storey car park), and the noise is especially enjoyable in the convertible with the roof down.

Mash the accelerator, though, and you’ll discover that there’s more to the C63 S than just noise – it’s a full-on performance machine. The coupé is the quickest version, trailed fractionally by the heavier saloon, estate and convertible, but you'd struggle to tell the difference in pace without using a stopwatch. For reference, the saloon achieved a 0-60mph of just 4.1sec on our private test track, though the Giulia QV beat that with a mere 3.7sec.

The nine-speed automatic gearbox is pretty good but not the best. It’s a tad jerky when you're trying to park and its shifts aren’t as punchy or responsive as those of the Giulia QV or BMW M3. And while it's smooth enough once you're up and running, in manual mode, the system imposes a delay before you can change up if you let the engine reach its soft rev limiter. This means you’ll need to learn to shift at the right point for the fastest and most polished drive.

Meanwhile, you can alter the feel of the C63 S’s suspension with a mode switch on the centre console. In the softest ‘Comfort’ mode, the ride is softer than an M3 in its equivalent setting but firmer than a Giulia QV. That means it has enough compliancy over sharp ridges and deep potholes but feels better tied down than the Alfa on an undulating country road.

That said, we reckon the best setting for making the most of country roads is the midway Sport or even the firmer Sport Plus+. This tightens up the suspension and limits body roll. And while we admit that the C63 S isn’t quite as grippy or as focused as a BMW M3, its lower limits combined with the V8’s linear and approachable power delivery gives you the confidence to throw the car around and steer it with the accelerator pedal. A clever 10-stage traction control system also allows you to fine-tune how much wheel-slip is allowed before the traction control cuts in – a big boon over the Giulia Quadrifoglio, in which the traction control is either on or off.

Meanwhile, the steering is a pleasure. It’s not overbearingly heavy around town but the load increases beautifully as you build speed through turns, with plenty of feedback through the steering wheel. That means you can feel confident about where you place the car on the road and that encourages you to push a little harder. It certainly hammers the RS4 once more, and provides finer detail and a more reassuring heft than the Giulia and M3’s lighter setups.

Whichever bodystyle you choose, the C63 S will eat up the miles when you need it to. Wind noise is pretty hushed at speed and, while you have to put up with a bit of road roar from the fat rear tyres, it’s not overbearing. Mind you, it's fair to say that overall refinement is one area in which the RS4 Avant and Giulia QV have the C63 S beaten. 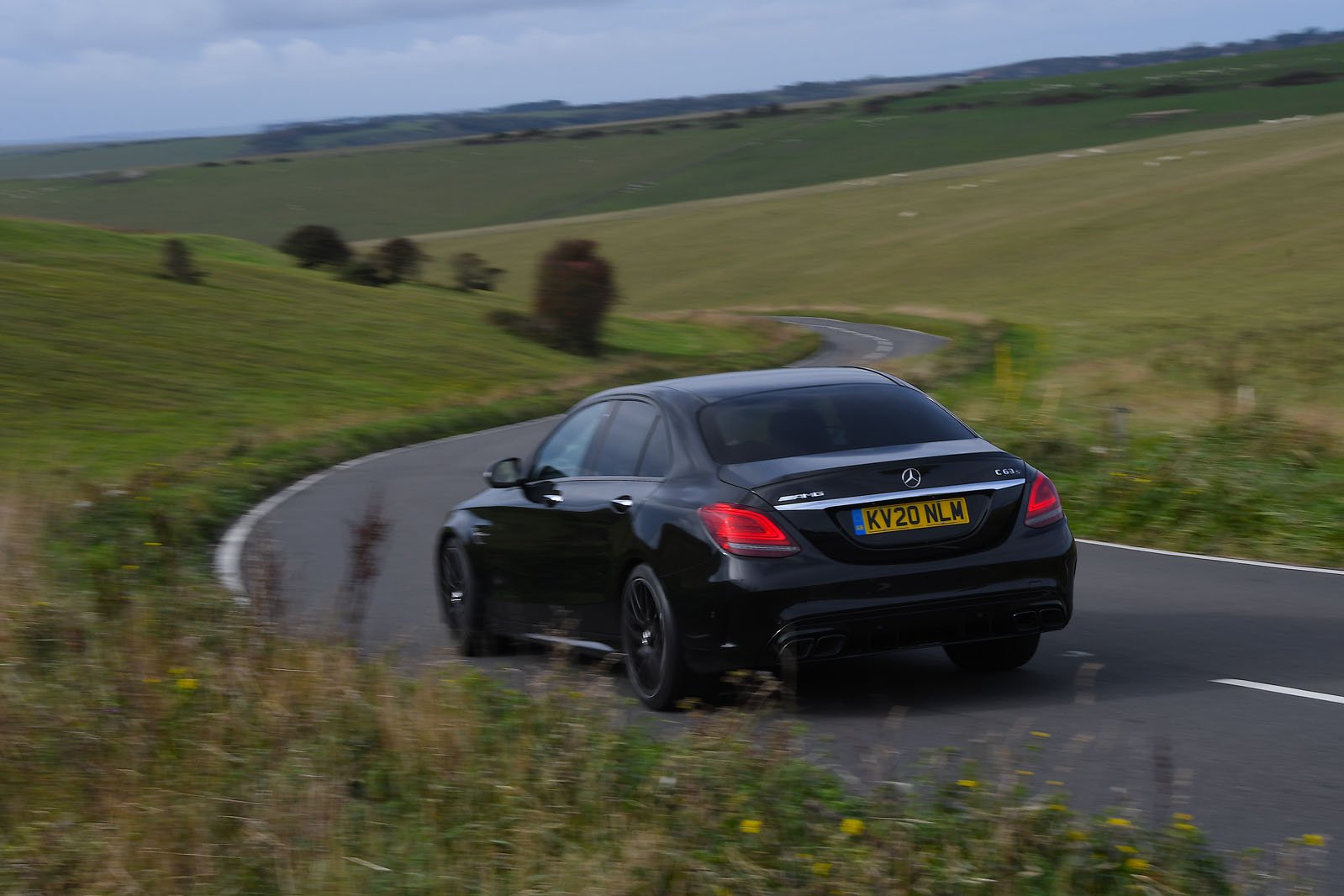