More for you |
Every 5-star car on What Car?Used test: Maserati Levante vs Porsche MacanNew issue of What Car? magazine on sale nowMost and least reliable small SUVsRevealed: the car makers whose discounts have got bigger since lockdown
Home
News
2012 Mercedes G63 AMG details revealed
news 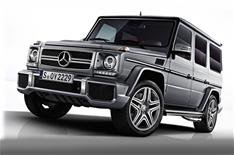 Details for the 2012 Mercedes G63 AMG have been revealed ahead of its expected on-sale date in the autumn.

The headline news is the 5.5-litre twin-turbo V8 engine, which it shares with the new ML63 AMG. The engine produces 537bhp and 561lb ft of torque, and is linked to Mercedes 7G-Tronic automatic gearbox. The G63 can blast from 0-62mph in just 5.4 seconds, and accelerate to a top speed of 130mph. Average economy is expected to be around 20.5mpg with CO2 emissions of 322g/km.

The G63 AMG gets different equipment compared to the rest of the model range, including 20-inch alloys, AMG brakes, a custom stability control system and a black twin-blade radiator grille. It also builds on the standard cars Merc infotainment and assist systems, with leather seats and the option of carbonfibre trim.

Prices have yet to be announced, but we expect it to cost around 119,000 when it goes on sale later this year.