More for you |
Jaguar E-Pace vs Jaguar F-Pace: which is best?It it right for dealer to keep a used car's registration document for months? Will my car be able to run on the new E10 petrol? UK’s first electric car charging forecourt to openBMW X7 long-term test review
Home
News
2013 Audi S3 unveiled
news 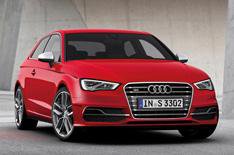 This is the new Audi S3, which will hit British showrooms in early 2013.

The high-performance version of the new A3 will rival the likes of BMWs M135i and the upcoming Mercedes-Benz A45 AMG.

The S3 will get an all-new 2.0-litre TFSI engine, which has been designed specifically for it. Technical highlights include a new lightweight alloy cylinder head and a sound flap in the exhaust system to improve the engine note. The new powerplant will produce 296bhp and 280lb ft of torque, enough to blast the S3 from 0-62mph in 5.1 seconds.

Audis latest four-wheel-drive system will be fitted as standard, and two transmission options will be available: a manual or a dual-clutch system, both six-speed.

Audi has cut the new models weight, with the 2013 S3 tipping the scales at 1395kg 60kg lighter than the outgoing model.

The new model will get Audis Drive Select system, which allows the driver to alter throttle response, steering weight and, when the dual-clutch gearbox is specified, the shift point. The S3 will offer LED headlamps as an optional extra.

Audi says that the new S3 will arrive in dealerships in early 2013. UK prices have yet to be confirmed, but we expect the S3 to cost around 31,000.