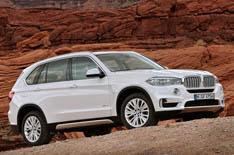 This is the new BMW X5, which promises to deliver a more premium cabin along with much-improved refinement and fuel efficiency when it goes on sale in the UK in November.

The new generation of BMW's most luxurious SUV is designed to take the model further upmarket and create some fresh air in the range between the X5 and its smaller brother, the X3.

The car's styling gets a light refresh, with a shorter front overhang and surfacing along the sizeable flanks. The overall profile is similar to that of the X3, in fact - albeit on the larger scale required by a model that can offer three rows of seats.

The latest X5 will be offered with a choice of five engines - four diesels and one petrol - and, for the first time, with the option of a rear-wheel-drive model alongside the usual four-wheel-drive variants. Regardless of how many driven wheels it has, the X5's gearbox will be a standard eight-speed automatic, equipped with stop-start.

UK sales will start on November 16, with three initial models. The xDrive30d uses a 3.0-litre six-cylinder turbodiesel engine with 255bhp and 413lb ft of torque, and it can reach 62mph from rest in 6.9sec. BMW claims this X5 is around 20% more efficient than the model it replaces, with a combined fuel economy figure of 45.6mpg and CO2 emissions from 162g/km.

Three further diesel-engined models will arrive before the end of this year: the sDrive 25d and xDrive25d, which introduce a four-cylinder 2.0-litre turbodiesel motor into the X5 range for the first time, and the xDrive40d.

The 2.0-litre turbodiesel has 215bhp and 332lb ft in both of its models, but the rear-drive sDrive25d model's greater efficiency brings its CO2 emissions down to 149g/km and lifts economy to 50.4mpg. The four-wheel-drive xDrive25d emits 155g/km and averages 47.9mpg.

The xDrive40d uses a twin-turbocharged 3.0-litre straight-six turbodiesel with 309bhp and 465lb ft; it should return around 44mpg and emit 169g/km of CO2, although BMW has yet to confirm this.

The X5 has traditionally been one of the more road-focused SUVs, and the new variant looks poised to build upon that reputation with Drive Dynamic Control, which is standard on all models. It allows the driver to select different modes that adjust the power steering response, the gearbox set-up and, depending on which of the four suspension packages has been chosen, the car's ride and handling.

The cabin has been radically altered, with BMW's 10.2-inch wide-screen display dominating the fascia. Comfort or sports seats can be chosen for the front, while heated comfort seats are now available for the second row for the first time. The third-row seats can be lowered into the boot floor individually, potentially maximising boot space when only one of them is required.

BMW says the car offers at least 650 litres of boot space and up to 1870 litres if the second and third rows of seats are folded away completely.