With plug-in hybrids now more tempting than ever, can the Peugeot 508 Hybrid rise to the top of the class?...

Whether you’re buying privately or you’re looking at company cars, plug-in hybrids sure look tempting. Take the Peugeot 508 Hybrid for instance; its sizeable battery pack gives an electric-only range of up to 39 miles according to official figures, and fuel economy is up to 235.4mpg.

With your sensible side satiated, you can then consider that the Hybrid is one of the quickest versions of the 508. That’s thanks to a total of 222bhp rustled up by a turbocharged 1.6-litre petrol engine and an electric motor that’s integrated into the standard eight-speed automatic gearbox. However, unlike other Peugeot PHEVs, there’s currently no four-wheel drive Hybrid4 option.

On paper figures are one thing, but the plug-in hybrid class is a hotly contested one with plenty of talented combatants, such as the BMW 330e and Skoda Superb iV. Entry-level Allure versions of the 508 Hybrid undercut them both on price, so should the aforementioned What Car? Award winners be worried? 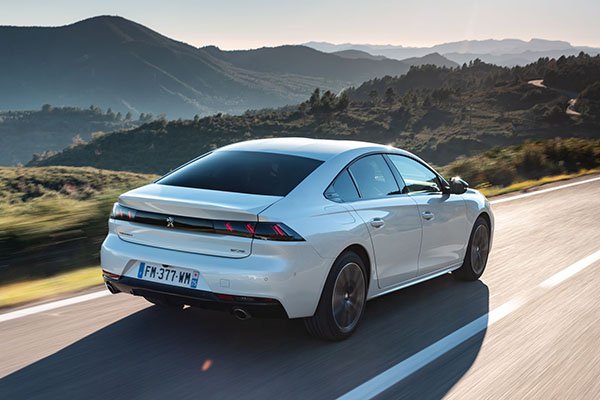 With a belly full of volts, the 508 Hybrid defaults to Electric mode where its single 108bhp electric motor does all the work. Acceleration isn’t blistering, but it feels reasonably nippy up to 30mph and will easily get up to motorway speeds and stay there. Unlike many hybrid and electric cars that have totally seamless acceleration, you do notice a bit of a pause as the automatic gearbox changes gear to keep the electric motor working efficiently.

Switch to Hybrid mode via the drive mode button next to the gearlever or just by running out of charge, and the 508 shuffles between electric and battery power how it sees fit. This is ideal for longer journeys to eke out the battery’s charge as long as possible. Gearchanges are a little smoother in this mode, but there is a bit of a pause between you putting your foot down hard and all 222bhp meeting the road.

When it does, performance is brisk rather than outright fast with 0-62mph taking 8.3sec. That’s down on the Skoda Superb iV, let alone the BMW 330e. Sport mode livens things up slightly, with quicker reactions from the gearbox, but you’ll soon realise that the 508 Hybrid is happiest when driven in a more sedate fashion.

For a start, there’s fuel economy. Top up the batteries every night, drive sensibly and do most of your driving in electric mode, and you can see some truly impressive numbers. Although we averaged 90mpg according to the trip computer during our testing, this figure could be much higher if you’ve got a relatively short urban commute. On the other hand, longer journeys where the battery is only being used a small portion of the time would see the economy figure fall significantly.

The batteries prove to be a double-edged sword, however. While they can give excellent economy, their additional weight (equivalent to three very burly adult passengers) also impacts how the car rides and handles. This is true of all plug-in hybrids, it’s just that the 508’s suspension isn’t as good at hiding that extra bulk, especially compared to the 330e.

Drive along an undulating stretch of motorway and the 508 floats over crests slightly giving a not-unpleasant waft. That calm is spoiled somewhat when you hit an expansion joint, pothole or other surface imperfection, revealing a thump from the suspension that you’ll both feel and hear. A Skoda Superb iV makes a more comfortable long distance companion.

Get to a bend and you’ll find there’s plenty of grip and less body roll than you’ll find in the Superb iV, helped by our test car’s optional adaptive suspension that you can stiffen up. The fast steering is a boon when manoeuvring and during tight turns, but the wheel’s small size does take some getting used to. It always feels like a heavy car, though, and one that doesn’t relish being hustled along. It's worth noting that there’s only around £1000 separating our fully-loaded test car and a BMW 330e M Sport which feels far more agile and entertaining.

As for how quiet it is, well, that depends on the situation. Around town in electric mode it’s exceedingly hushed, although as your speed increases you might need to crank up the stereo to drown out a bit of wind and road noise. The petrol engine is quiet in normal use, but does get a bit coarse when you’re working it hard. 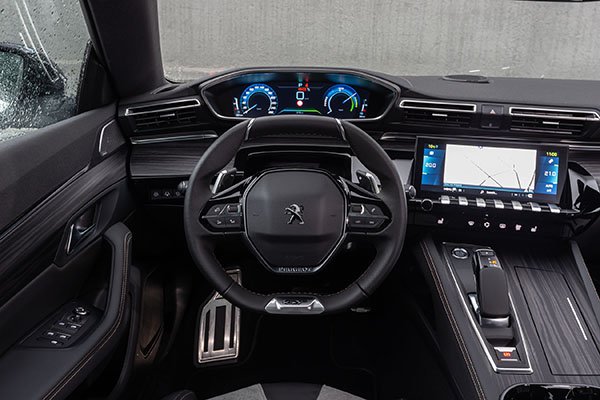 There’s no doubt that the 508 Hybrid has a ‘wow’ factor inside, with its high-mounted digital instruments, glitzy trims and a big 10.0in touchscreen on most models. There’s a good spread of pleasingly squishy plastics although you don’t have to look too hard to find scratchier stuff.

Space up front isn’t bad, although head room is some way off the 330e and Superb. Even so, a six-foot plus adult will fit without issue. The same can’t be said of the back seats, however.

Move to the boot, accessed by a handy hatchback, and capacity above the boot floor is unchanged compared to the regular 508, although underfloor storage is reduced. That puts it ahead of the 330e but behind the cavernous Superb iV.

For more on the 508’s interior, infotainment and the other engines available, head to our main Peugeot 508 review.