Audi RS3 Sportback back on sale 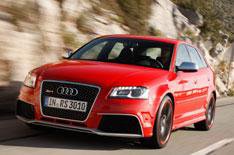 The Audi RS3 Sportback is back on sale in the UK, after strong demand prompted a second production run.

An initial run of 500 UK cars sold out in the first half of 2011 Audi says that due to consistent demand, 400 more cars will be built for the UK and that 150 of these have already been sold.

The car itself is unchanged; as before it's a heavily modified range-topping version of the A3 Sportback. On the outside there's a wider body with carbonfibre-reinforced wings, 19-inch alloys and a sporty makeover. Inside, there are leather-trimmed sports seats and bespoke trim.

An all-new A3 Sportback is due later this year. It'll be based on the new A3 3dr, which has just gone on sale, and is expected to be unveiled at the 2012 Paris motor show this September. Sporty versions are likely to be available from launch, but another RS3 is at least two years away.