The number of collisions caused by driver distraction is rising each year. It accounted for 15% of accidents in 2019, compared with 13% in 2016 and 14% in 2017, according to Department for Transport data. And when you focus on fatal collisions, distraction of some sort contributes to 25% of incidents.

Against this backdrop, the safety of in-car touchscreens has been questioned by safety campaigners, while Highways England has also raised concerns about the use of them. You operate them in a similar way to smartphones, yet nothing has been done to restrict the use of them while driving. By contrast, anyone caught using a handheld mobile can be fined at least £200 and get six penalty points for succumbing to this type of distraction. So, should we be worried that many car makers have swapped traditional dashboard controls and infotainment systems with buttons for touchscreens over the past five years? While digital instrument panels can be a boon because they allow a wider range of information to be displayed directly in front of the driver, the same can’t be said for touchscreens, which are generally more fiddly and time-consuming to use on the move.

Even Audi, which has traditionally garnered praise for the ease of use of its infotainment systems, has ditched centre console-based rotary controllers for touchscreens in its latest models, and some also have a touchscreen for secondary functions such as the climate control. That said, its systems are still among the best, because they offer the driver a number of different ways of doing each command. You can manipulate the sat-nav map by pinching the touchscreen, or via a small dial on the steering wheel, and if you want to change radio stations on the move, you can request this using the voice control system.  However, not all car makers give you a choice of ways to do various tasks, and it’s these cars that are potentially the biggest problem.

To find out just how distracted a driver can become while performing six common tasks, we filmed two people driving 20 different car models that encompass the majority of the different types of infotainment systems and dashboard layouts on offer. Our results only relate to the specific system tested, because more and less sophisticated systems are often available with different trim levels of the same model, or as optional extras.

We analysed the footage of our two drivers – both of whom were familiar with each system – doing each task to see how long each spent looking at dials or a touchscreen. The results of our research reveal that it can take more than twice as long to adjust the heater fan in a car with this function on a touchscreen rather than a dial or physical switch. It can also take more than four times as long to zoom out on a sat-nav map and eight times as long to scroll down a list of radio stations. 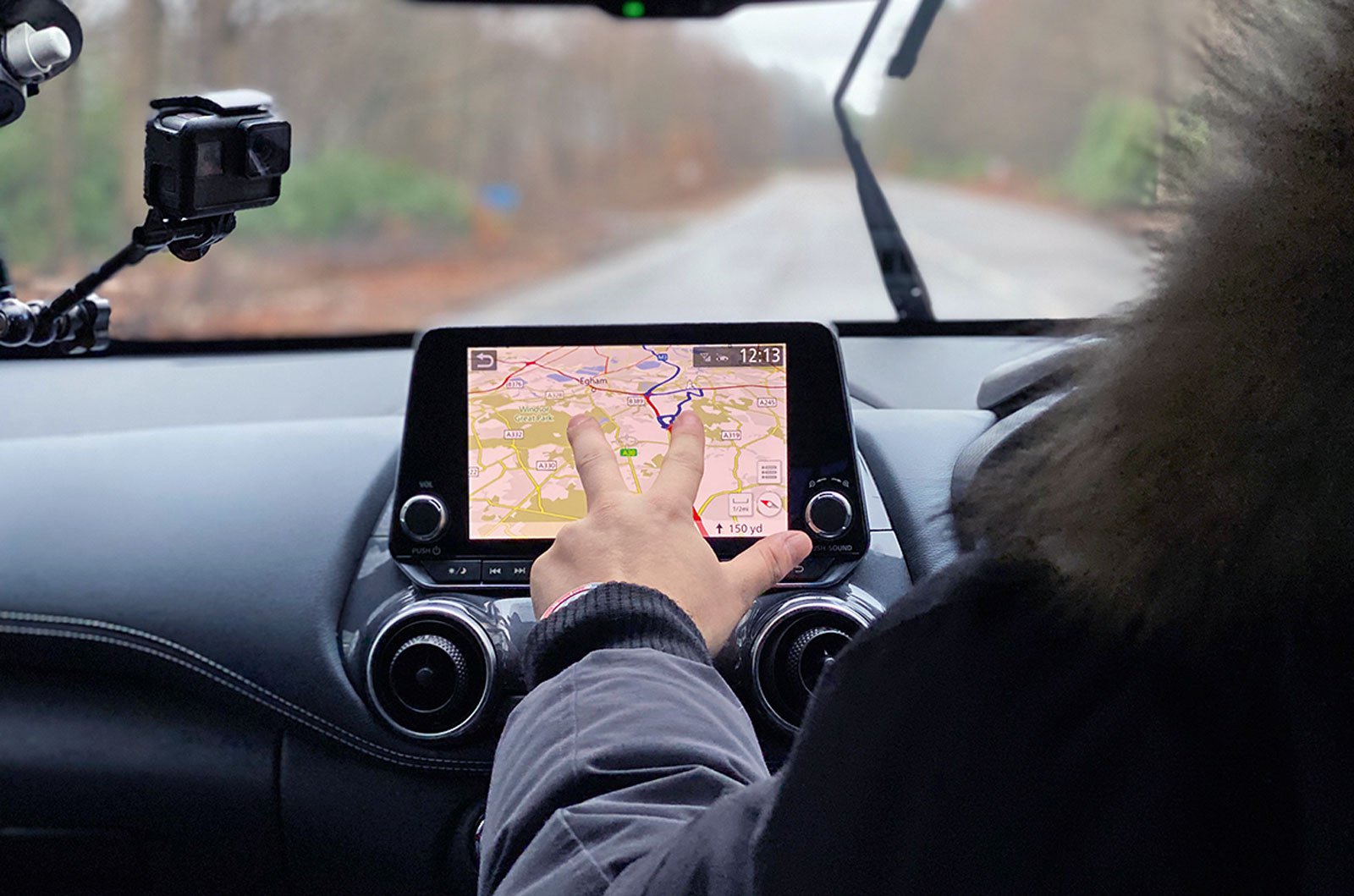 Meanwhile, using voice control to find the nearest fuel station – a task that should be far less distracting than using a touchscreen – can make drivers take their eyes off the road for more than 10 seconds if the system is slow to respond and requires them to go through lots of stages to complete the command.

When you consider that a car covers 13.5 metres per second at 30mph, in our worst case scenario of spending more than 42 seconds not looking at the road, the vehicle will have travelled the length of almost six football pitches in that time.

1. Turn up the temperature by 2deg.

3. With a 20-mile route programmed into the sat-nav and the infotainment screen on the home page, go to the map screen and zoom out to see the entire route.

5. With the radio tuned to Virgin Radio DAB and the infotainment screen on the home page, go to the main list of DAB stations and switch to BBC Radio 4.

6. Using the voice control button on the steering wheel (where fitted), ask the car to find the nearest service station.

Next: The most distracting systems >>