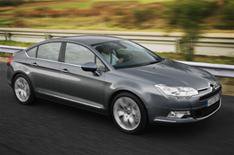 While the safety organisation praised the protection offered to adult occupants in the C5, it criticised Citroen for fitting a poorer seat belt reminder system than was in the previous-generation C5.

The C5 received four stars out of five for child occupant protection, one more than it did previously, but was again criticised for achieving two stars for pedestrian protection.

Euro NCAP noted: 'With the ground-breaking technology for pedestrian protection that Citroen introduced with the C6, it was disappointing to see that the C5 received two stars.'

A Citroen spokesman said: 'The C6 does have an effective pop-up bonnet system to protect pedestrians, but it is twice the price of a C5.

'Also, while we respect Euro NCAP's comments on the seat belt reminder system, we do believe the system we have is effective. It warns the driver if any of the five seat belts are undone.'