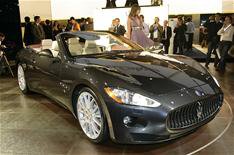 What is it?
It seems as if modern-day Maserati couldn't make an ugly car if it tried, but it's excelled itself with the Grancabrio; its first four-seater convertible.

Whats new?
With a long wheelbase and a multi-layered canvas roof that disappears completely from view when open, the Grancabrio is the epitome of the understated, sophisticated connoisseur's tourer.

It's based on the Granturismo coup and powered by the 4.7-litre version of the company's V8 engine but, with a car such as this, what matters is not so much how powerful it is but what it looks and sounds like as it goes about its work. Imagine that V8 engine note through all those tunnels on the Riviera

The styling is by Pininfarina, whereas Maserati's last open car, the two-seater Spyder of 2001, was the work of Giugiaro. It means the entire Ferrari-Maserati range has now been created by Pininfarina.

How much will it cost?
The Grancabrio is due in the UK in March or April next year and is likely to cost about 15% more than the Granturismo.

That will mean a six-figure starting point, but the exact figure will depend on whether Maserati chooses to introduce it with an automatic gearbox or Cambiocorsa paddle-shift manual, and conventional or computerised suspension.