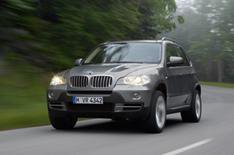 BMW will launch a special-edition X5 and an updated 6 Series range in September.

The X5 xDrive35d 10 Year edition will celebrate the 10th anniversary of the X5's launch.

No photos have been released, but BMW has confirmed that 20-inch wheels and bespoke paintwork will distinguish the X5 xDrive35d 10 Year from other X5s. Unique interior trim and a high level of standard equipment will also be included.

Updated 6 Series
An updated 6 Series range will also be launched in September, which BMW says gives 'extra content', with its most popular options fitted as standard.

The model line-up has been restructured, with the previous trims replaced by SE, Sport or M specification.

Standard equipment has been increased. All models now come with:

BMW's Service Inclusive package, which covers all scheduled maintenance costs for five years or 60,000 miles, comes as standard on all models apart from the M6.

Prices for the updated range start at 53,710, a 2760 increase on the current entry-level model.

A replacement for the 6 Series is expected in 2011, based on the all-new 5 Series that will be launched early next year.