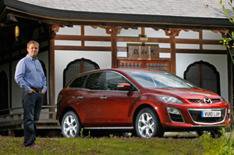 There cant be many SUVs that flutter their eyelids like the Mazda CX-7. After a year and more than 21,000 miles with it, I think it still looks as good as the day I first set eyes upon it. Theres something about its complex curves, sloping roofline and detailed light clusters that got me hooked. So the real question to answer was how much substance came with all that style.

Having introduced the car as a rapid but thirsty turbocharged petrol model, Mazda sensibly relaunched the CX-7 with a 2.2-litre diesel engine. Its still pretty punchy mind you, with 170bhp on hand, and a hefty shove of torque at most engine speeds. On the downside, its CO2 emissions weigh in at 199g/km, which makes it an expensive choice for company car users.

Selecting the options didnt take long; the only one available is metallic paint, at 500. We chose Copper Red. The CX-7 comes with a long list of standard equipment, including sat-nav, heated leather seats, climate control, a reversing camera, Bluetooth, cruise control and a nine-speaker Bose stereo. All for a list price that was a shade under 27k.

I collected the car from Guildford Mazda (0844 880 7975), where I was given a run-down of its features by sales manager John Crook.

Considering those great looks, and the generous specification for the money, I was surprised at how rare CX-7s were. I saw only a couple of others in a whole year, and the typical reaction of friends and family to the car was: That looks great what is it?

Obvious rivals include the Honda CR-V, Nissan X-Trail and Toyota RAV4, plus European alternatives such as the BMW X1 and Volkswagen Tiguan. I had a hunch, though, that in the real world the CX-7 competes against all sorts, from coups to regular family cars. A call to fellow owners in an earlier report confirmed my guesswork; thanks to all who got in touch.

In my hands, the CX-7 was used as a family wagon. I needed it to haul my wife, two boys (aged five and nine), a cocker spaniel and lots of stuff, which included weekend bags and a camping ensemble.

We found that from time to time the CX-7 falls short as a family car. It was used for just one camping trip because we couldnt get everything into it, and ended up leaving a few items behind. The boot is around 100 litres smaller than those of most rivals, and its the sloping roofline thats to blame. The seats are a little narrow in the back as well; my five-year old found it difficult to click his seatbelt in next to the booster seat. Style comes at a price.

On the road the CX-7 was mostly enjoyable. Its precise steering and limited body roll made it fun to drive compared with other SUVs, and on motorways it was a refined cruiser, with little wind noise.

I could live with the slightly firmer ride that comes with the CX-7s sportier-than-most approach; the pay-off in town over bumps and potholes was noticeable but not unforgiveable.