While the Volkswagen T-Cross is no Range Rover in terms of driver elevation, it does place you farther from the road than many of its small SUV rivals, including the Ford Puma and Kia Stonic, and much higher than the Skoda Kamiq.

But aside from how high you sit, the whole arrangement feels similar to that of the Polo, on which the T-Cross is based. That's a good thing because it means there’s a wide range of seat and steering wheel adjustment, including standard height and lumbar adjustment on all trims, plus a height-adjustable centre armrest (SE trim and above). Our only minor grumble is that, depending on the length of your legs, you might find that the leading edge of the seat base digs into the backs of your thighs.

The Active Info Display (standard on range-topping R-Line trim and optional on SE and SEL trims) replaces conventional analogue instruments with a 10.3in digital screen behind the steering wheel. This places a lot of useful information – including navigation maps in models with sat-nav – right in front of you; it's worth considering as an option of the lower trim levels, but not essential.

Thin windscreen pillars keep the view forwards unobstructed, but, as with many of its rivals, the T-Cross’s thick rear pillars are a hindrance when you're looking back over your shoulder.

Fear not, though. Manoeuvring worries can be alleviated by adding the relatively inexpensive rear-view camera to our favourite SE trim. Front and rear parking sensors come as standard from SEL trim upwards, but it’s disappointing that you get no sensors at all on S or SE trim unless you dip into the options list.

Ultra-bright LED headlights come as standard with SEL and R-Line trims, but are a very expensive option if you go for an SE trim. 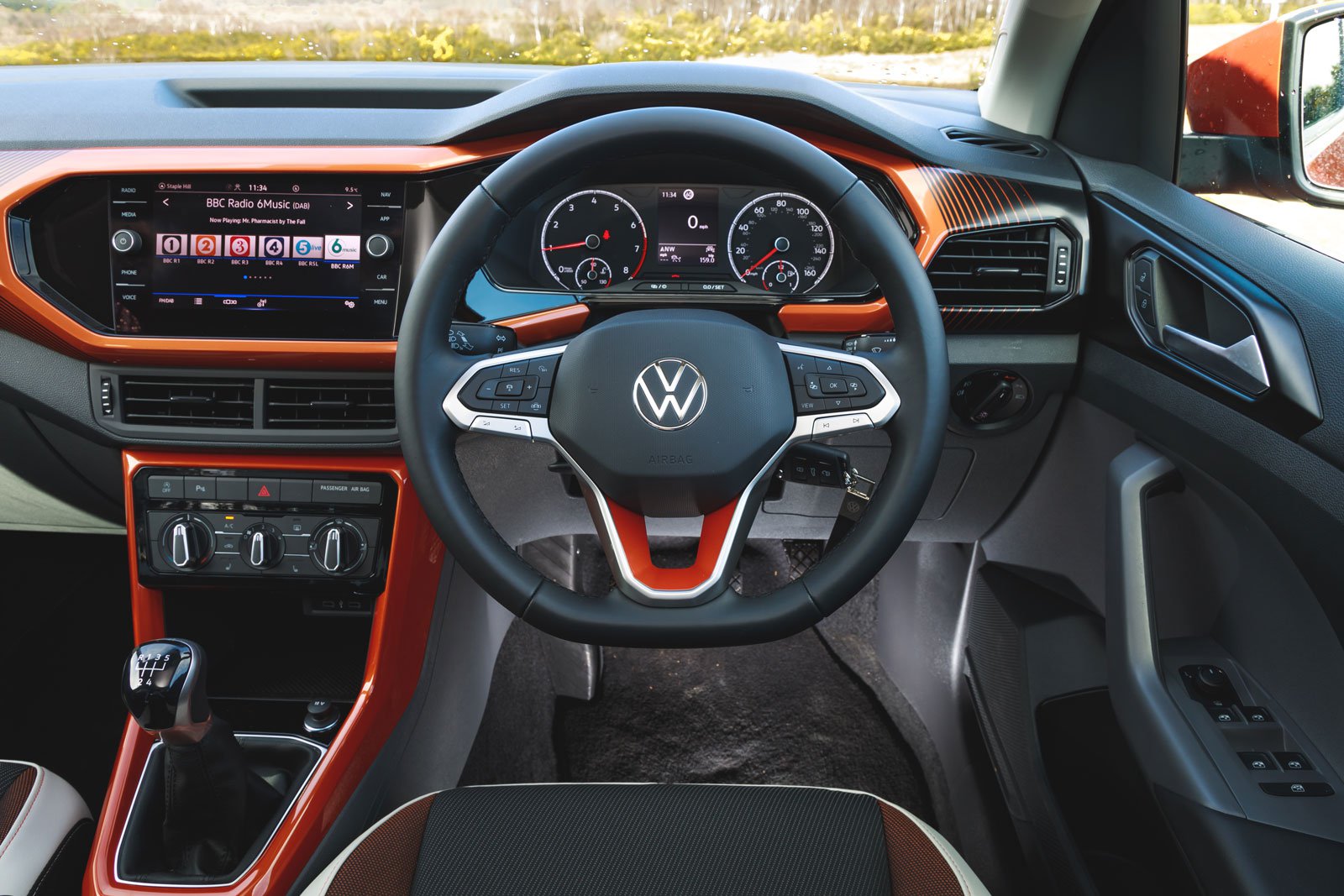 Every T-Cross has an 8.0in colour touchscreen, along with a USB connection, Bluetooth and a DAB radio. Volkswagen Connect also comes as standard – this allows the car to communicate with an app on your phone, which, among other things, analyses the efficiency of your driving or checks on the car's location, just in case you've forgotten where you parked.

Our recommended SE trim adds a second USB charging port and Apple CarPlay and Android Auto smartphone mirroring, so you can use your phone’s apps – including the navigation aids like Google Maps and Waze – through the touchscreen. If you'd prefer a built-in sat-nav, you'll need either to pay extra to add it or upgrade to SEL or R-Line trim, but we wouldn't bother.

Whichever trim you choose, the basic hardware and software remains the same and works just as well as it does in other Volkswagen models – and better than the Peugeot 2008's. That is to say, the operating system is user-friendly and the screen responds promptly to prods. However, as with other touchscreen-based systems, some of the smaller icons can be hard to hit on the move. Meanwhile, the standard sound system has six speakers but can be upgraded with the Beats Soundpack; this adds a subwoofer and boosts power to 300 watts.

Sadly, the T-Cross hasn't made the s of its Polo origins in terms of interior quality. Sure, everything feels well screwed together and should stand up to the rigours of family use but, where the cheaper Polo displays a mix of soft-touch materials on the top of its doors and dashboard, the T-Cross presents a sea of hard, shiny plastic. Surprisingly, the closely related (but also cheaper) Skoda Kamiq feels quite a lot more upmarket inside.

At least you have the option of jazzing things up with a range of trim packages. They're called Design Packs and offer coloured and textured dashboard panels, for example, but they aren't especially cheap. R-Line trim adds some logos to the interior, plus highlights such as ‘aluminium-look' pedals to give it more visual flair.