Every BMW 5 Series has a comfortable and supportive driver’s seat, with electric seat height and backrest angle adjustment as standard along with electrically adjustable lumbar support.

The M Sport models have bigger side bolsters to hold you in place more securely when cornering quickly. There’s also plenty of steering wheel adjustment, and the driver’s seat drops lower than it does in the rival Mercedes E-Class, so you feel as though you’re sitting in, rather than on top of, the car. Fully electrically adjustable seats – with a memory for different driving positions – are optional.

Digital instruments are standard (a head-up display is optional), the dashboard is clearly laid out and all the controls are within easy reach, with physical buttons for all its major controls. That's not the case in the Audi A6, which uses a touchscreen for the climate controls, and, while that looks great, it's distracting to use while driving. The 5 Series' enormous, cosseting armrests, positioned ideally either side of you, seal the deal for it being about as comfortable on a long trip as any car can be.

Seeing forwards over the bonnet of the BMW 5 Series is no problem thanks to relatively slender front pillars and a tall, wide windscreen. It’s the same story looking sideways – you get a good view out at roundabouts and T-junctions. Seeing what’s going on behind isn’t quite as easy, but many rival saloons have similarly restricted over-the-shoulder visibility; indeed, the E-Class's thicker rear pillars make that car even tougher to park.

Fortunately, every 5 Series comes with front and rear parking sensors, a rear-view camera and a parking assistant system which can steer the car into spaces for you and reverse it distances of up to 50 metres. A 360-degree camera is also available as part of the Technology Plus Pack.

At night, bright LED headlights are standard, or you can upgrade the headlights to clever adaptive LED units. These can stay on main beams but shape their light field around any cars in front to avoid dazzling other road users. This function also features on BMW’s range-topping Laserlights, and that’s rather handy when you consider they have a range of over 650 metres. 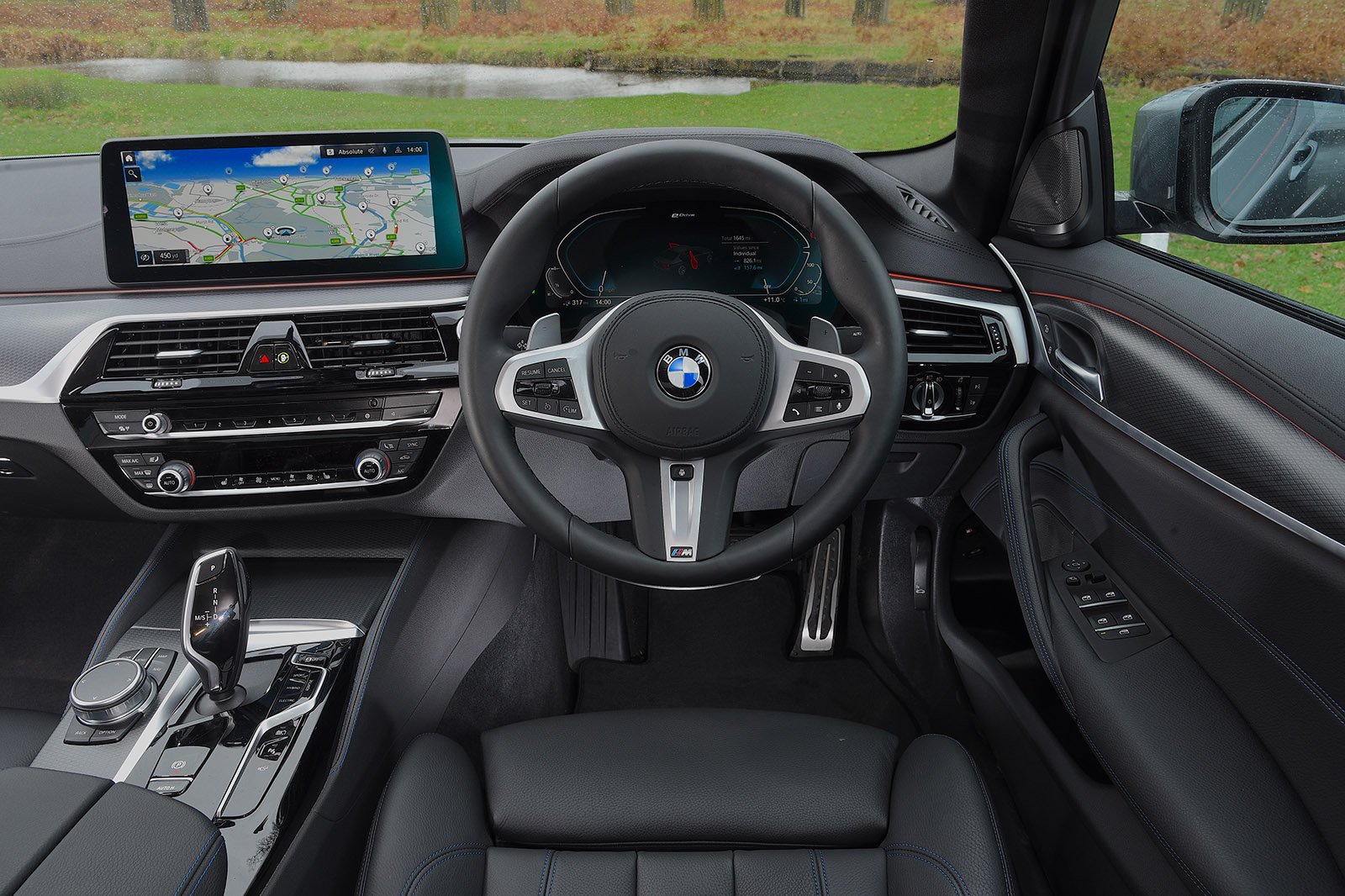 Every 5 Series comes with BMW’s range-topping Professional Multimedia system, which packs a whopping 12.3in widescreen, Apple CarPlay and Android Auto, sat-nav, various online services, and DAB radio. It’s one of the best systems going, with easy-to-follow menus and responsive software – more so than the Mercedes E-Class's occasionally dim-witted system.

The 5 Series' screen is touch-sensitive, so you can control it by pressing it, in much the same way you would an iPad. However, between the front seats, there’s also a dial that's surrounded by shortcut buttons. If you're driving, the dial is much easier (and safer) to use than the touchscreen because you just twist it to scroll through the on-screen menus and press it down to make selections. With touchscreen-only systems – such as you get in the Jaguar XF and Audi A6 – you have to look away from the road to find and hit the icons.

A concierge service is standard, and helps with tasks such as finding parking places and service areas, while on the options list you’ll find a range of increasingly powerful sound systems (the 16-speaker Harman Kardon system will be appreciated by music fans), a wi-fi hotspot and a digital TV. There’s even a gesture control feature, which lets you operate certain functions using mid-air hand signals. It's more of a gimmick than a useful gadget, though.

There’s no danger that you'll feel short-changed when climbing into a new 5 Series. All the materials, even those lower down and that you’ll rarely come into contact with, look and feel of suitably high quality, and most of the metal trims are the real thing – although there are also some silver-coated plastics. Similarly, most of the buttons and switches are nicely damped.

You can choose different trim inserts, including wood and gloss black, that run the length of the dashboard and around the doors, and they all look and feel upmarket. The standard ambient lighting obviously doesn’t make any difference to build quality, but it does make the interior look even more salubrious after dark.

The Audi A6's interior feels just as securely bolted together as the 5 Series', but the Mercedes E-Class – which, in some people's eyes, has a heap more visual swagger – feels flimsier in places.