With a 0-62mph time of just 7.2sec, the four-cylinder BMW 520d diesel is capable of whisking you up to motorway speeds without any fuss. Performance is roughly on a par with the rival Mercedes E-Class 220d's, although in terms of real-world driveability (as opposed to outright 0-62mph acceleration), the Audi A6 40 TDI has a slightly wider performance window and is fractionally more flexible as a result.

If you want more grunt, the brawnier six-cylinder 282bhp 530d has plenty. It’s effortlessly quick and so smooth  you quickly forget it's a diesel. For those who want the ‘ultimate’ iteration of the 5 Series (aside from the outrageous BMW M5), there's the M550i xDrive. With a 523bhp 4.4-litre V8 and a 0-62mph time of just 3.8 seconds, its supercar-rivalling pace makes you wonder why you need to spend the extra on the fractionally quicker M5. The only other petrol engine in the range, the 520i, is the least recommendable – it needs to be revved hard to achieve its best and is only fractionally cheaper than the brilliant 520d.

If you desire efficiency but want to avoid diesel, the plug-in hybrid 530e teams a 2.0-litre, four-cylinder petrol engine with an electric motor to increase fuel efficiency and reduce emissions. It's capable of an impressive turn of speed, and yet when you drive it in electric mode, you can bimble around town in near silence, with sufficient pace to keep up with traffic easily. It offers the driver the best of both worlds and is our pick of the range. We would take our 530e in standard rear-wheel drive configuration, but xDrive four-wheel drive is also available. We have yet to sample the six-cylinder, xDrive only, 545e, but it's significantly more expensive than the 530e and has a shorter claimed pure electric range: 34 miles for the 545e versus a maximum of 36 for the 530e (roughly the same as a Mercedes E300e).

On the standard passive SE suspension, the BMW 5 Series is supple enough around town over big bumps, but there’s a bit of an underlying shimmy through the car on anything other than super-smooth roads. If you do lots of motorway miles, you’ll probably find this quite annoying. Sticking with the SE trim's standard 17in wheels (or 18s on more powerful versions) helps to minimise the problem, but adding bigger wheels with run-flat tyres exacerbates it. M Sport suspension is quite stiff for what's supposed to be a luxury car.

On M Sport models (excluding 520i and 520d models) you can specify optional adaptive Variable Damper Control. It’s only available through the optional M Sport Pro Pack, but we think it is an option worth considering because the adjustable dampers do a great job of settling down the ride and rounding off sharp abrasions, especially on the 530e with its 19in wheels (the other models get larger 20in as part of the pack).

Meanwhile, the range-topping M550i comes with its own bespoke adaptive suspension set-up. In Comfort mode the ride is more pliant than you might expect from an M Performance model, wafting you around town like a well-mannered luxury saloon. Even when you put the dampers into their firmest setting, the suspension has no trouble absorbing the kind of undulations that would have an M5 driver bouncing out of their seat. In short, it feels as though the M550i was designed for UK roads – something you can’t say about its purebred M-Divison sibling. 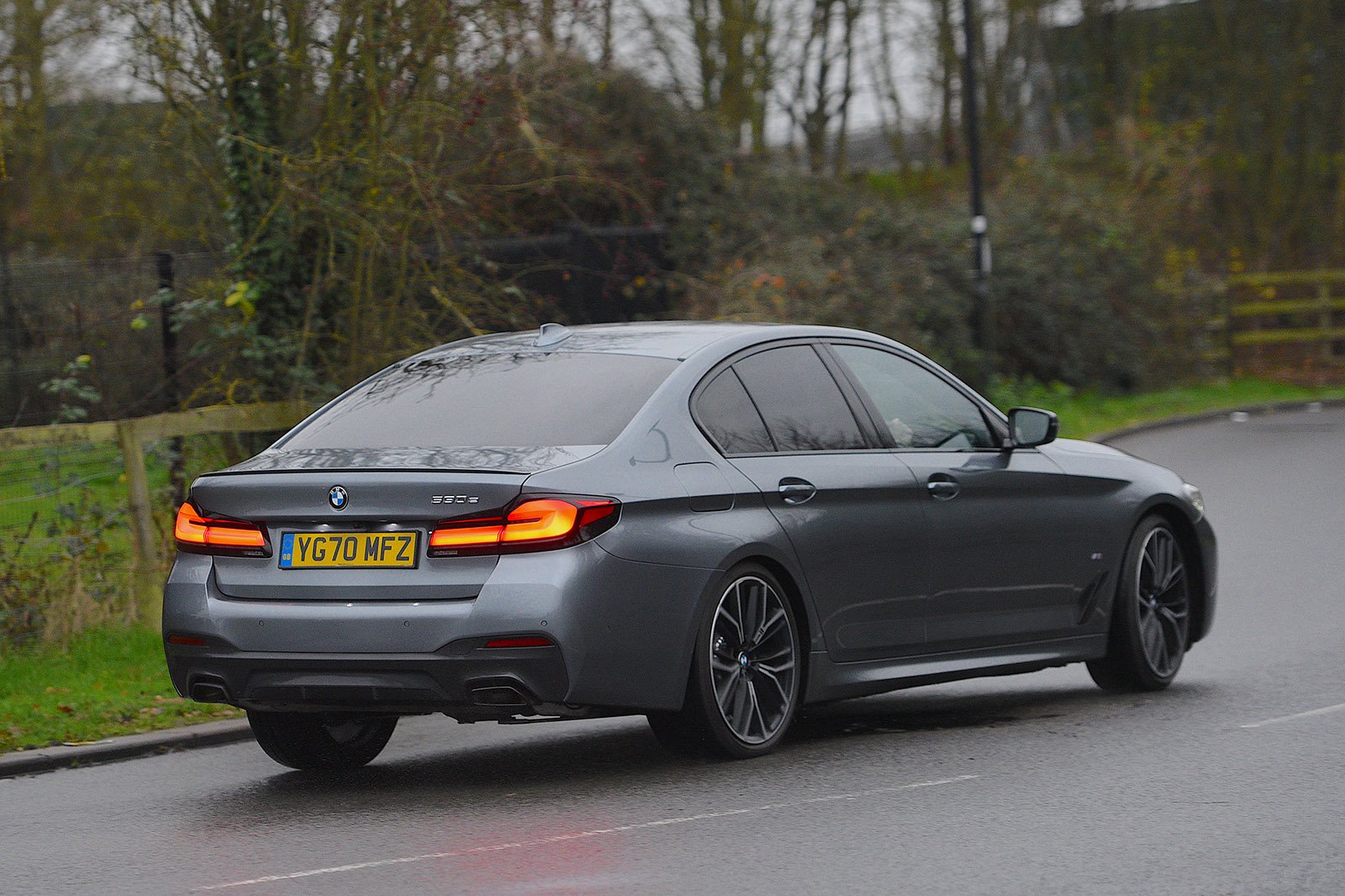 Unlike BMW in its famous advertising slogan, we'll stop short of classing the current 5 Series as 'the ultimate driving machine' – but it certainly snaps at the class champion's heels. That champion is the Jaguar XF, by the way, which has delicate and informative steering that the 5 Series can't quite match. The 5 Series' steering is accurate and nicely weighted, though, and more intuitive than the Audi A6 and Mercedes E-Class's.

The 5 Series doesn't have quite as much front grip as its key rivals, either. But drive it at eight-tenths – exploiting its sublime rear-wheel-drive balance, rather than leaning too heavily on its front tyres – and there’s still plenty to savour about pedalling it down a snaking A-road. Going for the xDrive version (four-wheel drive) improves traction in the wet considerably.

As you might expect, the range-topping M550i is the sharpest member of the regular 5-Series range to drive. It has loads of grip, exhibits very little body lean and, if you slip the stability control into M Sport mode, it will even let you exit corners with a little bit of angle. And while we admit that its steering isn’t quite as sharp as the set-up you get in the full-fat M5, the M550i will make for a better daily proposition for most drivers.

The BMW 5 Series does a brilliant job of keeping wind and road noise at bay, even at high speeds. It's designed very much with fast, German autobahns in mind, after all. For library-quiet cruising manners, though, avoid M Sport trim (aside from the 530e, which has 18in wheels, every other M Sport trim equipped 5 Series gets massive 19in items) and run-flat tyres, which drone and slap more over expansion joints.

The type of noise your 5 Series makes depends, in part, on which engine you go for. The M550i petrol is the best, sounding deliciously smooth and sweet even when you hoof it. The six-cylinder 530d diesel is remarkably muted, merely taking on a pleasant growl when you work it harder. Our favourite engine, the 520d, isn't as hushed as the A6 40 TDI’s under acceleration, but it pipes down once you're cruising.

Meanwhile, the 530e is the quietest 5 in the range. When there’s enough juice in its battery for it to run on electricity alone, it’s almost mute, and is far from noisy even when its 2.0-litre petrol engine (shared with the 520i) chimes in. All engines come with a superb eight-speed automatic gearbox, which is never anything but ultra-smooth through every gear.