Our pick of the petrol engine range is the 1.2 Puretech 130. It uses its modest power to good effect, getting from 0-62mph in a little over 10 seconds. Okay, the Skoda Kodiaq 1.5 TSI 150 can better that slightly, but the C5 Aircross is a smidge brisker than a Peugeot 5008 fitted with the same 1.2 Puretech 130 engine. The important bit is that, while it’s no rocket ship, it will get to 70mph in a sprightly fashion and it pulls harder from low revs than a Mazda CX-5 Skayactiv petrol, and this means less gear-changing up hills.

If you intend to tow a heavy caravan or boat around, though, the 1.5-litre BlueHDi 130 diesel might be a better bet. It has the same outright power as the 1.2 Puretech 130 but even more low to mid-rev shove, although this doesn’t make it any quicker when you’re really in a hurry. If you want a C5 Aircross that can get away from the traffic lights briskly, try the 2.0 BlueHDi 180. It’ll hit 0-62mph in a nippy 8.6sec and packs even more low-rev diesel shove.

The final engine option is a plug-in hybrid that combines a 1.6-litre turbocharged petrol engine with a battery pack and electric motor to send a total of 222bhp to the front wheels through an automatic gearbox. Working on its own, the electric motor has enough poke for the C5 to keep pace with traffic, and the all-electric range is 31 miles. A call for more urgent acceleration will wake the petrol engine, and when petrol and electric power working together, the Hybrid is one of the quickest models in the range; brisk acceleration is delivered after a moment of hesitation. Even so, the Audi Q5 plug-in hybrid is much faster.

As we mentioned earlier, Citroën makes some bold claims about comfort. And in many respects those claims stack up. This is one pillowy soft SUV, so, if you’re the type of person who enjoys laying back in a comfy hammock, you’ll love the C5 Aircross’s wallowy body movements. It’s at its best on A-roads and motorways, where it’s one of the most cosseting SUVs you can buy for the money; it has none of the annoying fidget that blights rivals like the Mazda CX-5 that exist at the sportier end of the spectrum, .

It being so soft, there’s a bit of side-to-side sway over undulations; It’s very gentle – rather like you’re being rocked slowly in your comfy hammock by a light breeze – and nothing like the aggressive movement you’d experience in a Ford Kuga PHEV. Still, if you prefer a better compromise between the softness of the C5 Aircross and the sportiness of the CX-5, the Peugeot 5008 is a great alternative.

The 5008 is also a bit smoother over broken town roads; the C5 Aircross can struggle for composure if you hit a really nasty pothole. Even then it’s not too bad, but avoid the biggest 19in wheels if you want to feel it at its best.There’s good news for plug-in buyers; unlike some rivals, the addition of a weighty hybrid system doesn’t negatively affect the ride, and the C5 Aircross is one of the comfiest plug-in SUVs for the money. 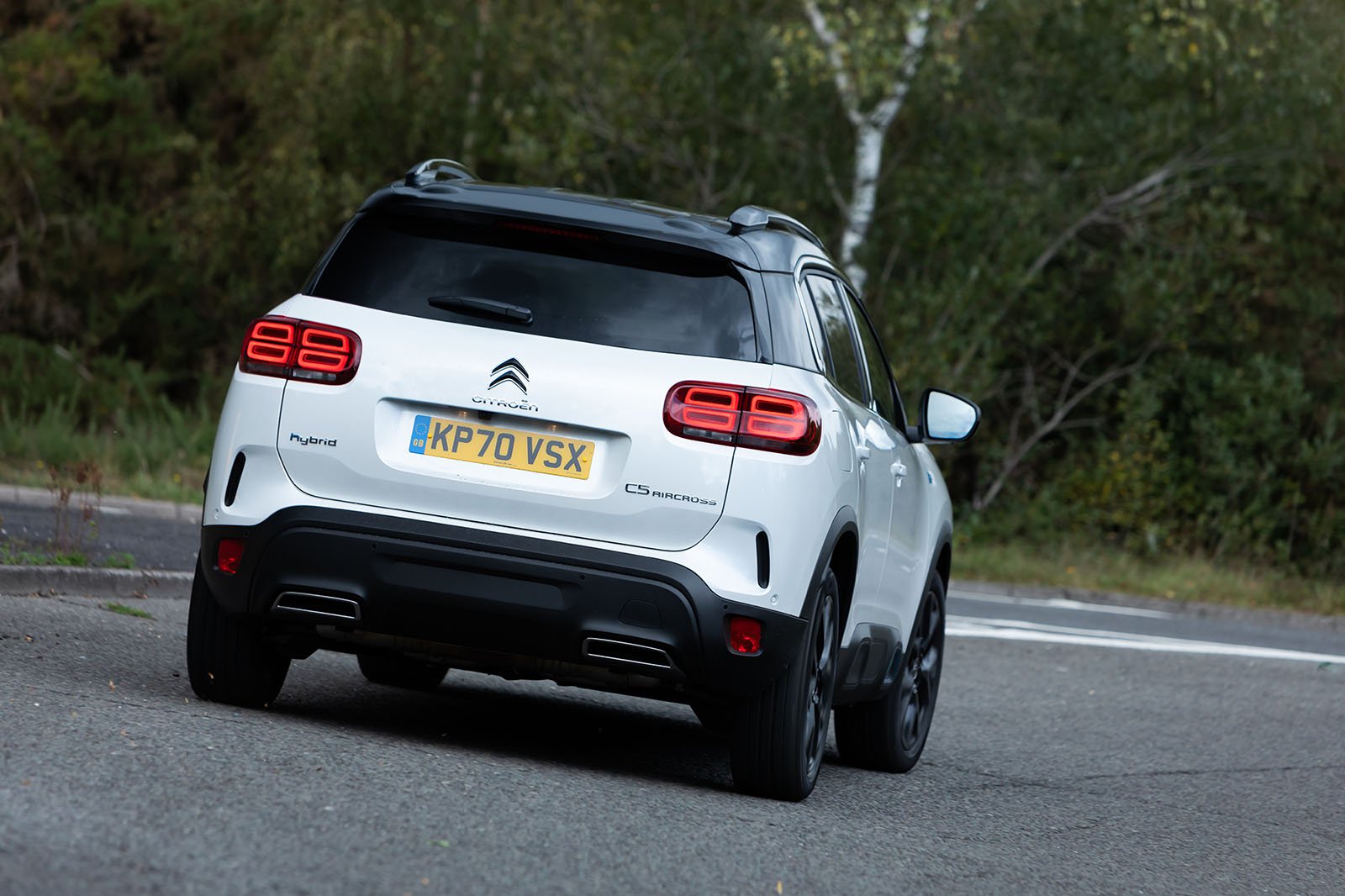 Unsurprisingly, given its soft suspension, the C5 Aircross would rather you didn’t drive it quickly on a twisty road. While it grips well enough, it leans over in bends far more than any rival and doesn’t feel particularly agile, and the hybrid models feel a little more cumbersome on account of their bulky battery packs.

If that doesn’t put you off driving briskly, the steering will. It’s fine around town, but never quite builds enough weight to provide reassurance or involvement in bends or at speed. If you want something that’s more agile and entertaining, we’d point you towards the Mazda CX-5 or Seat Tarraco.

Despite having only three-cylinders, the Puretech 130 engine is a smooth operator and only becomes vocal when worked hard. And even then it’s no worse than the Skoda Kodiaq 1.5 TSI, and far more subdued than the equivalent Honda CR-V or Mazda CX-5. Impressively, the BlueHDi 180 runs it close and proves one of the quietest diesel engines in the class. Yes, the Audi Q5 40 TDI is even better, but you’ll be spending a lot more money to get one. The cheaper BlueHDi 130 is perfectly acceptable, although is a little rowdier, while the Hybrid is near-silent in electric mode and still pretty muted when the engine kicks in. Pushing it hard reveals a slightly coarse edge, however.

In other regards, the C5 Aircross makes a peaceful long distance cruiser, stifling wind and road noise better than most similarly priced rivals. Our favourite Puretech 130 engine comes with a six-speed manual gearbox as standard, with an eight-speed automatic optional on Flair trim and above. The gearlever and clutch pedal only require a light touch, but the CX-5’s precise shift action is more satisfying.

The automatic reacts promptly when you ask for a burst of acceleration on the move and changes smoothly through its gears, but is less happy when partnered with the BlueHDi 180 diesel engine; here it can flit between gears too frequently and there’s also the odd jolt if you come off the accelerator pedal too quickly. And while the plug-in hybrid isn’t as jerky as the Volvo XC40 Recharge, the Ford Kuga PHEV is smoother than the Aircross when switching from electric to petrol power and when changing gear.