The entry-level 1.0 MPi 67 petrol is strong enough in town. This little three-cylinder engine gets the i10 away from the lights briskly enough, but it can feel a little wheezy on motorways (0-62mph takes 14.6sec) so be prepared to work the engine and its accompanying standard five-speed manual gearbox quite hard. With the optional AMT automatic 'box fitted it's even slower; this is basically the same five-speed manual gearbox but with a robot changing the gears and operating the clutch for you. The pauses between gearchanges can feel...quite pregnant.

If you're planning on trips farther afield than the next borough we recommend the 1.2 MPi 84. It's a 1.2-litre four-cylinder engine with a meatier 83bhp that feels stronger lower in the rev range and revs out more willingly, too. It's still not as punchy as the Dacia Sandero 1.0 TCe 90, so again, working the five-speed manual gearbox pretty often will be the order of the day to get it up steeper inclines or overtake on the fast lane of motorways. Its 0-62mph time is a relatively leisurely 12.6sec, which, again, is increased if you choose the AMT 'box.

If you want more pep, the 99bhp 1.0 T-GDi 100 engine could be of interest but it's exclusive to the pricier N Line trim. Having a turbocharger means it doesn’t strain as much to make decent progress; the 10.5sec 0-62mph time is pretty sprightly, although that's not as rapid as the Volkswagen Up GTi.

Considering that city cars aren't usually the comfiest modes of transport, the i10 is a revelation. Even on the largest 16in wheels it takes the sting out of vicious potholes and resists fidgeting annoyingly over pimpled surfaces. The Sandero also rides pretty well and there are more expensive cars, like the Peugeot 208, that ride even better, but by the standards of the class, the i10's impressive.

Increase your speed and it continues in that good vein. There's a supple edge that makes even long motorway jaunts a breeze, yet it avoids feeling too soft and bouncy, like a Citroën C3.

The i10 N Line gets stiffer springs and its ride is noticeably firmer, but while you’ll feel road imperfections more clearly, they are dealt with quickly and with no nasty crashes or thumps. Although the regular version is certainly more comfortable, we suspect those who like the idea of a slightly sporting hatchback will be more than happy. 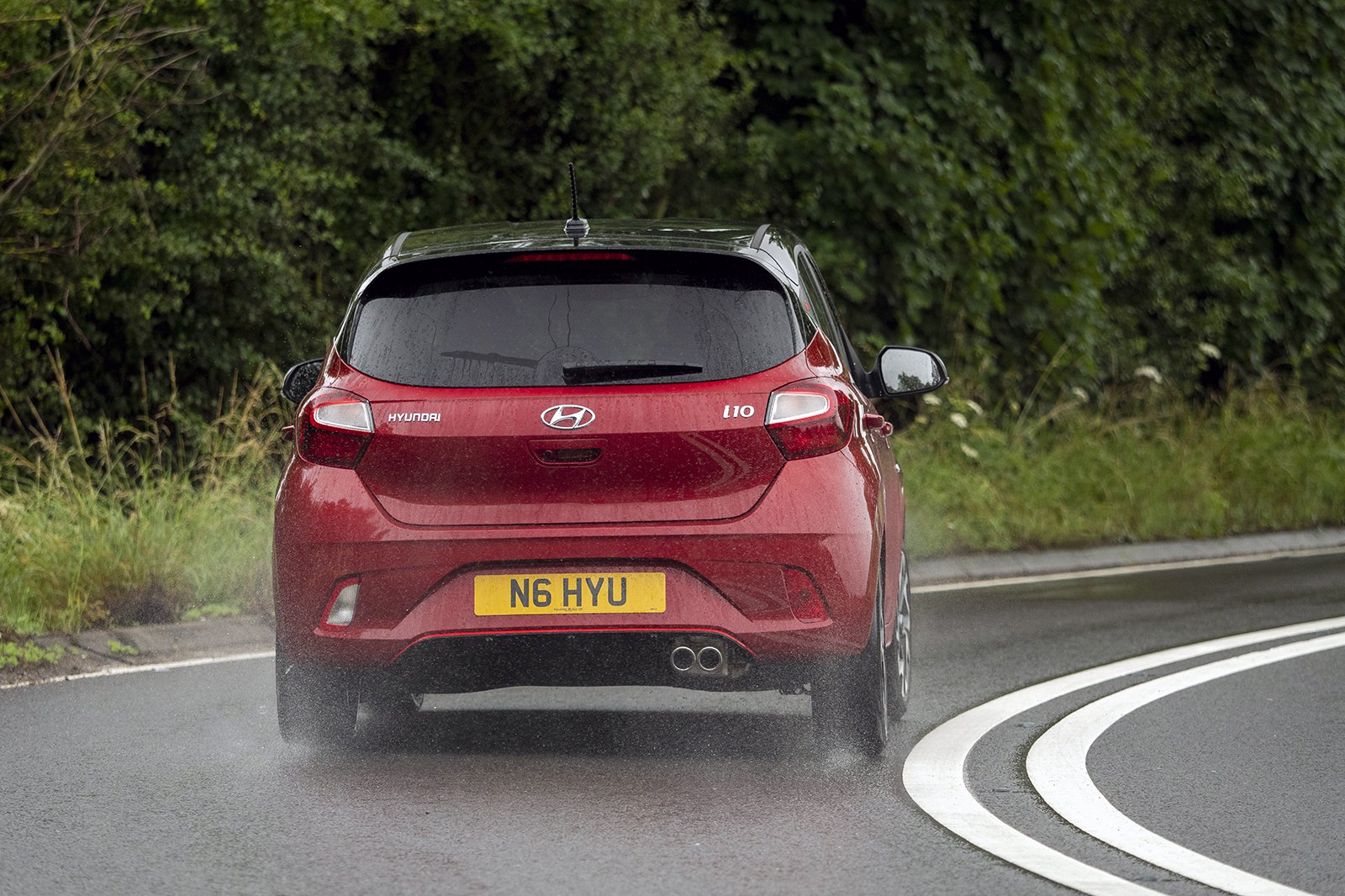 Let’s cut to the chase. You can have a surprising amount of fun in the i10. Even looking at it practically, its tight turning circle and light steering make town driving a breeze. Thankfully, the steering weights up nicely at speed, so the i10 never feels skittish on open roads. In fact, it's the steering's precision and natural-feeling responses that make the i10 such an enjoyable and easy car to place. And you’ll find that the i10 musters more grip in the wet than the Kia Picanto.

That said, the Picanto is better at resisting body roll and that gives it more of the playful agility that'll please those who really revel in throwing a car about. Stiffer i10 N Line models roll a little less in bends, feel a bit more poised and, therefore, more fun, but the difference isn’t night and day.

By the standards of dinky, three-cylinder engines, the 1.0 MPi 67 is a refined little lump that’s smoother and quieter than a Toyota Aygo's engine or the Sandero's. All you will feel is a little bit of vibration coming through the steering wheel at idle. The same goes for the 1.0 T-GDi 100, although this has a fruitier sound that’s in keeping with the N Line trim’s sportier demeanour.

The 1.2 MPi 84 is even better. Thanks to an extra cylinder that improves the engine's smoothness, you’ll feel fewer vibrations through the controls. And because it’s that much stronger than the 1.0 MPI 67, it doesn’t need thrashing as hard, either, leading to a quieter life. Wind and road noise at 70mph are better contained than they are in a Picanto, but you can still make out the engines whirring away in the background.

The standard five-speed manual gearbox has a light, slick and precise action, while the brakes are easy to modulate in stop-start traffic. The only issue is the clutch and accelerator of non-turbocharged models; the engine frequently bogs down and feels like it's about to stall as you go to pull away. You can prevent this by adding more revs, but this foible rather blots the i10's refined copybook. The automatic gearbox, meanwhile, is less clunky than the Toyota Aygo's, but we'd still suggest sticking with the manual 'box if you can.