The Mazda MX-5's driving seat is mounted fairly high and, while you can tilt the base, you can’t adjust the height so you might feel a little perched behind the wheel. Even so, you sit with your legs straight out forwards as if you were in a go-kart, with your posterior close to the road. Many will undoubtedly like this, but getting in and out can be an inelegant procedure.

The steering wheel adjusts for reach and rake, but taller drivers might wish it came towards them a little further. It's also worth mentioning that the pedals are slightly offset to the right. All but the tallest drivers will be able to get comfortable in the snug seat, though, so long journeys won't be a chore.

The stubby high-set gearlever is in just the right place, and there’s a well-placed padded central armrest. The driver's seat offers plenty of side support in corners and the dashboard layout is sensible and easy to use. The Audi TT Roadster has far more seat adjustment and is easier to get in and out of.

The MX-5 provides its driver with clear forward visibility – looking down the sloping bonnet gives you a real sports car feeling and the windscreen pillars don’t obscure your view at junctions and roundabouts. With the roof up, though, the view back towards the rear corners of the car is poor and the rear window is tiny.

It’s a shame that entry-level SE-L misses out on rear parking sensors, but all other trims get them as standard. A rear-view camera is standard on Sport Tech and GT Sport Tech models, and all trims get LED headlights. If you want auto lights and wipers, you’ll need second-rung Sport trim or higher. That also gets you an auto-dimming rearview mirror. 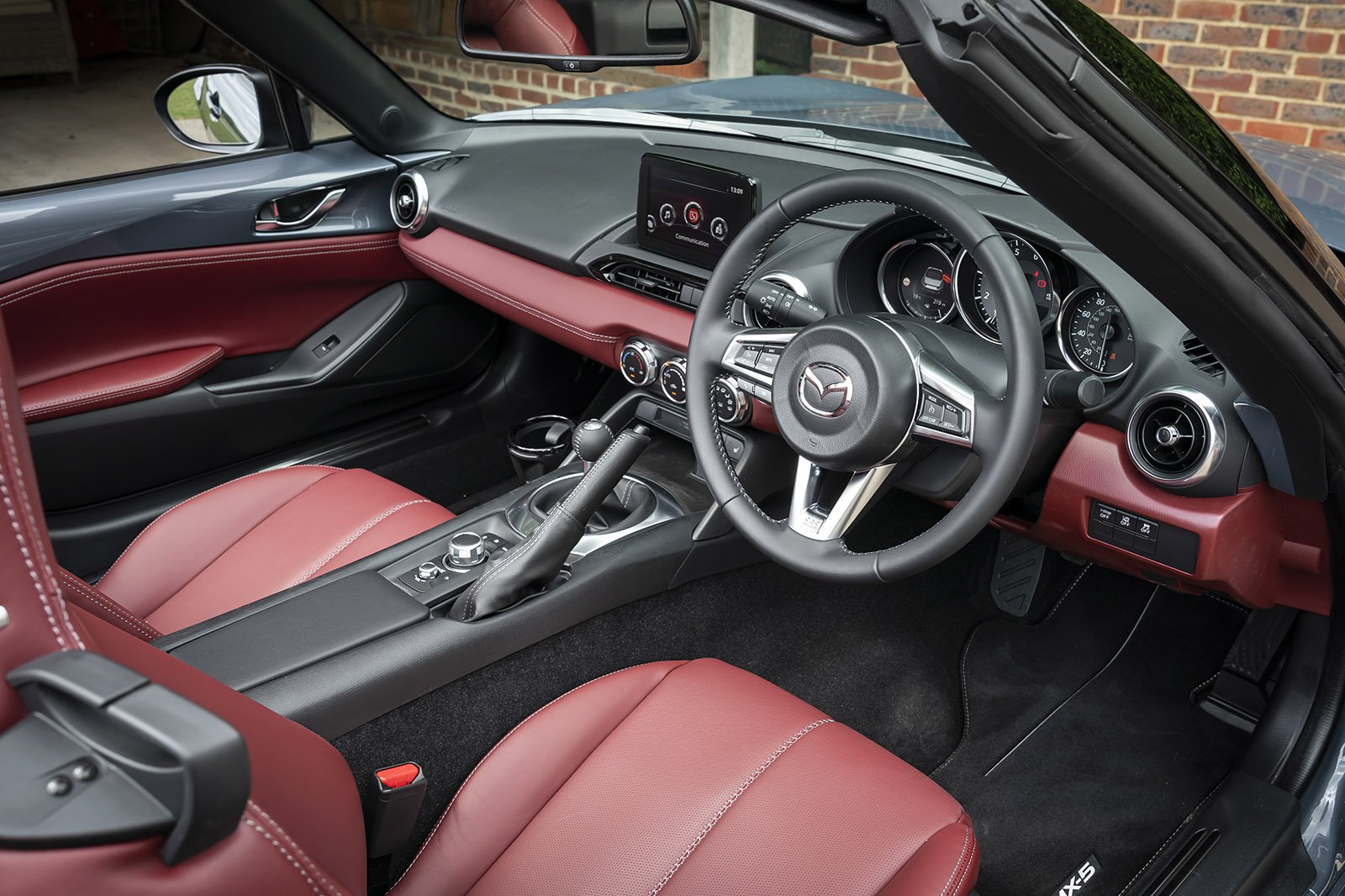 Every Mazda MX-5 gets a smart 7.0in touchscreen with Apple CarPlay/Android Auto, sat-nav, DAB radio and Bluetooth connectivity included. There’s also a single CD player, which is something of a novelty in today’s cars.

The system is easy to control using the rotary dial and shortcut buttons located in front of the gearlever. The only irritation is that you can’t turn off voice guidance on the sat-nav. You can mute it, but the system still turns your music down when there would have been an announcement.

The Bluetooth function works well and you can hold a hands-free telephone conversation at motorway speeds even with the roof down if you raise your voice a touch. You get two USB connectors at the base of the dash, next to a cubby that’ll take a mobile phone. All models apart from entry-level SE-L get a punchy nine-speaker Bose sound system. Although the BMW Z4 infotainment system is better still, the MX-5’s system is easier to use than almost every other rival, including those from Porsche.

Previous iterations of the MX-5 weren’t known for their lavish interiors, but Mazda has tried to up the ante with this current model.

Mazda's designers have made a decent fist of things, with an attractive array of textures, plastics that don’t feel too cheap and scratchy, and a sense that everything is very well put together. Top-spec cars look particularly distinctive inside, thanks to the leather upholstery in a choice of colours, set off by contrasting stitching.

The Audi TT Roadster has a far greater spread of squishy plastics and switches that work with greater precision. Meanwhile, pricier sports cars such as the Porsche 911 are in a different league entirely.