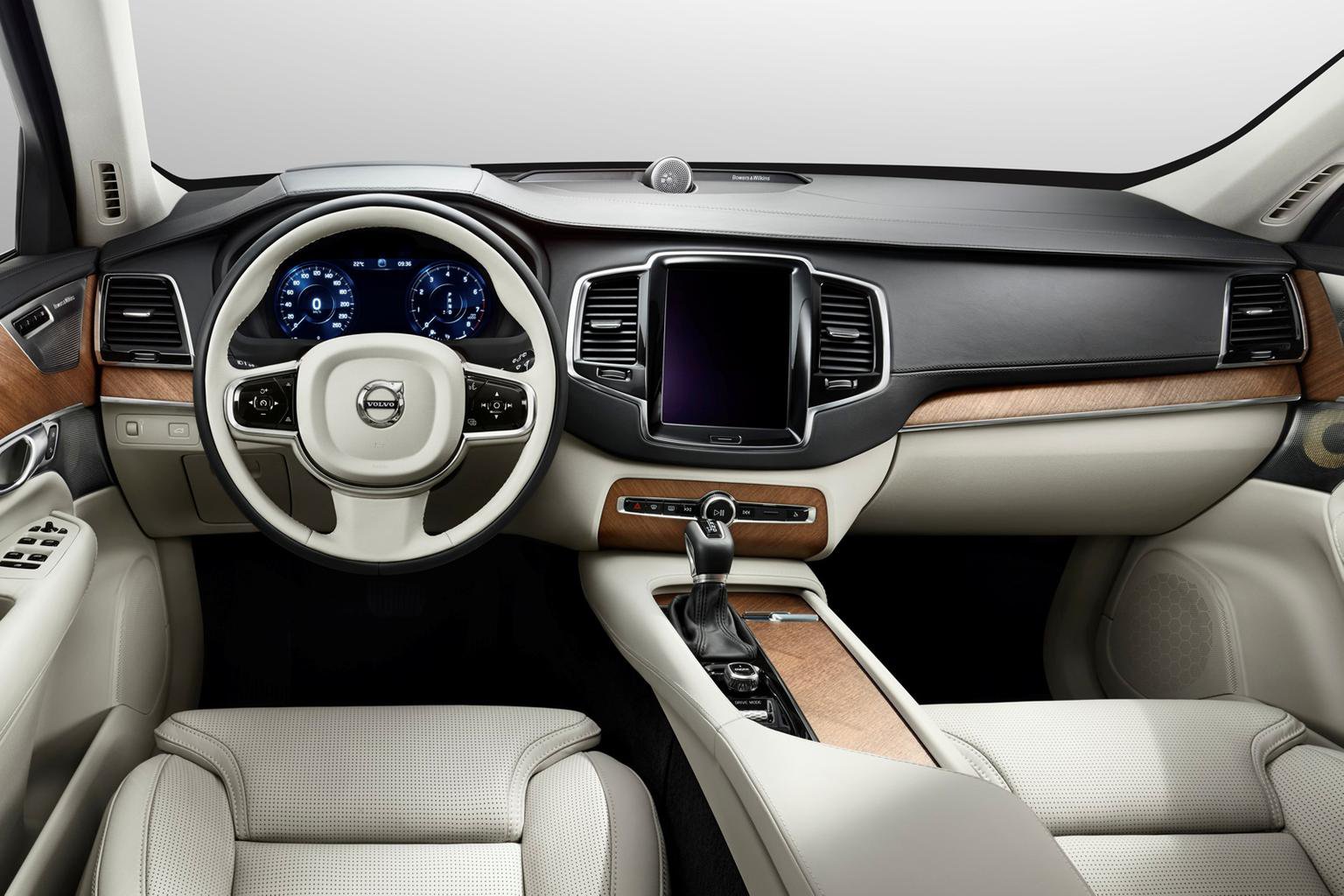 These are the first official pictures of the new Volvo XC90’s cabin. They reveal a much more luxurious cabin than in the car it replaces, with a tablet-sized portrait touch-screen that controls almost all of the functions.

Like the current model, the new XC90 is a seven-seat SUV, but Volvo claims that leg- and kneeroom in the second and third rows have been increased thanks to the thinner seatbacks in front of the passengers.

All the seats in the second row can be reclined, slid and folded flat individually, while the third row of two seats collapses flat into the boot floor as before.

Volvo has gone to town on the luxury finishes all around the cabin. Soft leather covers the dashboard surface, door panels and transmission tunnel, while glossy or natural-look wood can be specified for the dash and door inlays. Chrome trim surrounds all of the air vents, and acts as edging for all of the wood panels.

The volume control, engine start button and drive mode selector all have a knurled, diamond-cut finish. Certain models will also be available with a handcrafted crystal gearknob in place of the standard leather-trimmed lever.

In the centre of the split-level dashboard is the large touch-screen, which is set at an angle facing the driver and controls almost all of the car’s settings. A single row of switches beneath it houses the buttons for the hazard lights, screen demisters, audio track skip and volume, plus the glovebox release.

The touch-screen’s default display is what Volvo refers to as ‘a stack of tiles’. Each tile controls a different feature - such as air-con, sat-nav or music - and when one tile expands when in use, the others shrink beneath it.

New for the 2015 XC90 is optional four-zone climate control, which provides individual settings for the driver and front passenger, as well as those in the second row. Air-con for the people sitting in the third row of seats will also be available.

There are no pictures of the exterior yet, but it will carry across many of the design cues seen on the Concept XC Coupe and Concept Estate. You can bet on it on having a bluff nose that’s dominated by a wide, slatted grille. Expect T-shaped daytime running lights and C-shaped tail-lights - both of which will be rolled out across the next-generation Volvo models.

The new XC90 is set to be the first Volvo fitted with self-driving technology, including an 'Adaptive Cruise Control with Active Steering' system. This can autonomously steer the car and keep it moving in pace with other vehicles in low-speed conditions such as heavy congestion.

Details about the new chassis and engine line-up will be released in mid-July, and the lowdown on the safety kit will be explained towards the end of that month. Finally, we will see the first shots of the exterior of the new Volvo XC90 at the end of August. The new car goes on sale in 2015.