At well over £60k, the Porsche 718 Boxster GTS 4.0 is the cheapest Boxster with a six-cylinder engine. Is it worth the extra over an S?...

It takes guts to admit you were wrong. And Porsche hasn’t admitted it was wrong, exactly, but in producing the six-cylinder Porsche Boxster GTS 4.0, it certainly appears to have made a spectacular U-turn. Maggie Thatcher – famously a woman “not for turning” – would not have approved.

Anyway, the story is this: a few years ago, Porsche swapped all its Boxsters over to emissions-busting, smaller-capacity, four-cylinder turbocharged engines. "Seems fair enough", you might be thinking, but it created merry hell. The general consensus was that, in real-world driving, they weren’t any more efficient and, tragically, ruined the Boxster experience by sounding like a washing machine spin-drying ball bearings.

This, though, isn’t the first Boxster to revert back to six cylinders; that was the beautiful, if quite hardcore, Spyder. The GTS is for those who want something a little less extreme for daily use. It uses the same naturally aspirated 4.0-litre engine as the Spyder, but detuned a little. Yet, despite intentionally strangling it, the latest GTS still produces 394bhp – 34bhp more than the outgoing GTS’s 2.5-litre turbocharged flat four. As a result, it’s nearly half a second quicker from rest to 62mph, taking just 4.5sec.

As before, the GTS is the penultimate model in the range. That puts it just beneath the Spyder and above the Boxster S, which, for the record, retains 2.5 litres and four cylinders. Compared with the S, you get bigger brakes, sportier suspension (which sits 20mm lower, but not as low as the Spyder's), a performance-enhancing Sport Chrono Package and sportier styling. The cost is £65,949, or nearly £3000 more than the outgoing GTS. Not cheap, then. So, is it worth splashing out the extra on a GTS over the Boxster S? 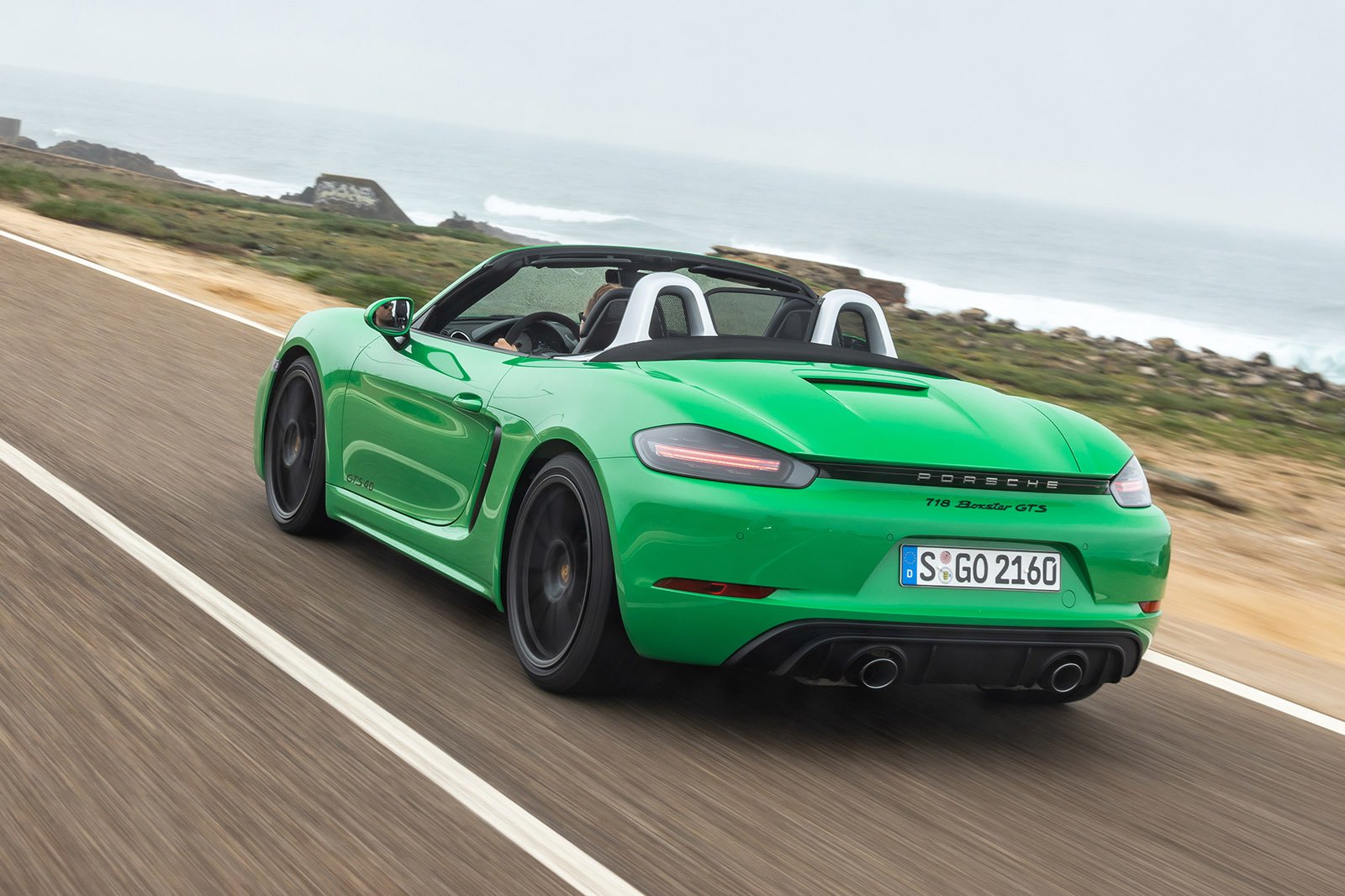 To answer our own question, absolutely. This engine is just adorable, in every respect. While the lumpy 2.5-litre S (and the old GTS, for that matter) revs out with all the smoothness of mid-flight turbulence, this new 4.0-litre flat six is balanced, like a zen trapeze artist, all the way from idle to rev limiter.

What about the all-important noise? That’s splendid as well. Instead of the 2.5-litre’s dreary, deadbeat thrum, the GTS oozes satisfyingly complex notes, which morph in tone and timbre with every increase or decrease in revs. It’s fascinating. You just want to keep listening and playing, and listening and playing…

It’s also inclusive, because if you happen to be hard of hearing then you can savour the rampant power delivery. Drive a 2.5-litre S and, sure, it’s quick, but it's also flat below 2500rpm until the turbocharger lights it up and fires you off. The 4.0-litre is multifaceted. To make steady progress, relax and ride the gently persuasive low-end torque, which pulls you along quite happily in sixth. Then, when the traffic parts and the road goads you into some appropriate fun, there’s that classic crescendo to savour, as the power builds and builds and builds, until just below 8000rpm, when it’s time to snick the next gear.

The gearshift, in typical Boxster fashion, is short and slick. If you want an automatic ’box, a dual-clutch PDK version will arrive at the end of the year. And in every other respect, the GTS is just as sweet as any other version. The steering has precious feel and perfect weighting, while the body control is bang on, so the car is planted and stable as the road rises and falls, and there’s plenty of grip. When that runs out, the car is inherently balanced, too. The only car that can compete with its composure is the Alpine A110 S, which doesn’t steer quite as beautifully but feels lighter on its toes.

It even fits the bill for everyday usability. From our experience, the GTS is perfectly comfortable across country, only showing a brittle side over sharp bumps in town. It floats over everything else and is, perhaps, more forgiving than the A110 S, although it’s close. 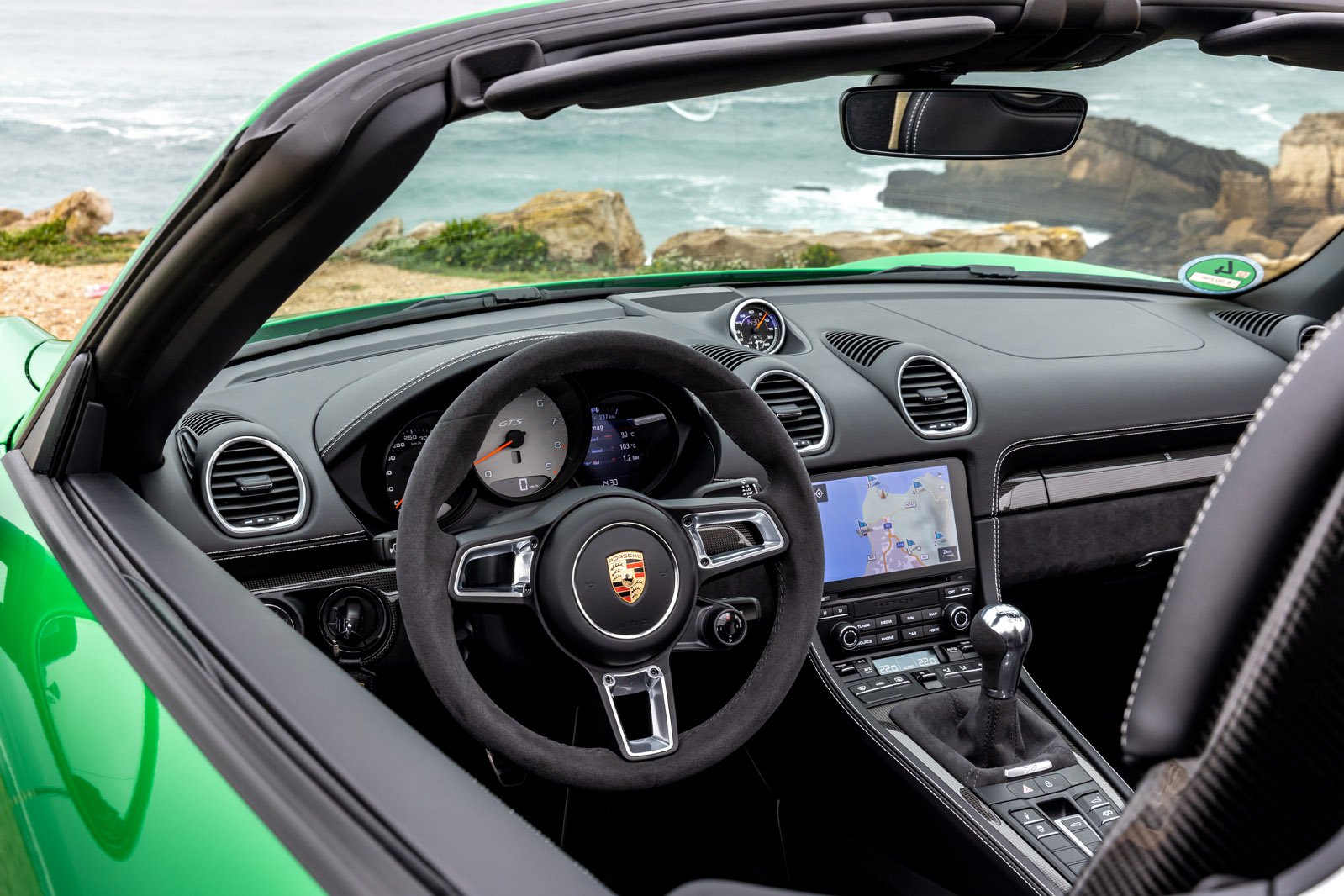 Inside, the latest GTS is barely any different from the previous car. It still hints at sportiness without going overboard and stripping the cabin bare. You still get air conditioning and a well-equipped infotainment system with Apple CaprPlay, so it’s already a mighty improvement over the A110 S’s.

The red-faced rev counter looks the part and its supportive sports seats feel the part, with their grippy, breathable Alcantara trim. Even adding the optional bucket seats won’t ruin the experience, because the driving position remains pretty much spot on.

The GTS is also more practical than the A110 S, but for more about the nitty-gritty, we’d suggest clicking the link to read our full Boxster review.