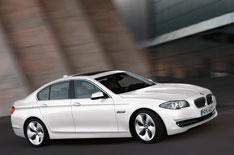 BMW is launching more efficient versions of its 5 Series saloon - including a new, leaner 520d designed to appeal to the company car market. The 520d Efficient Dynamics has the company's 2.0-litre turbodiesel engine, producing 181bhp and 280lb ft. It also has well-known Efficient Dynamics tech such as engine stop-start and brake-energy regeneration.

The new model, which is available only with a six-speed manual gearbox, also adds a longer final drive ratio and low-rolling-resistance tyres on a different design of alloy wheel. These measures help the 520d Efficient Dynamics to return 62.8mpg and emit 119g/km - a figure that gives the car a company car tax band band of just 13%.

Further revisions in 5 Series diesels
BMW will also replace the six-cylinder diesel in the 525d with a 2.0-litre four-cylinder unit that will have two turbos, 215bhp and 332lb ft of torque.

That's enough to improve the 525d's performance, while delivering gains in fuel economy of up to 20%. The remaining two six-cylinder diesel variants, the 530d and 535d, get revisions to their twin-turbocharged engines to increase power and improve fuel economy (by 13% in the 530d).

The 5 Series range gets two new petrol models: the 520i and the 528i. Both cars use turbocharged 2.0-litre four-cylinder engines, producing 181bhp and 242bhp respectively. The more potent model can reach 62mph in 6.2sec when fitted with a manual gearbox, and return CO2 emissions of 159g/km and 41.5mpg.

In one final engine tweak, BMW is making the 4.4-litre, twin-turbocharged V8 petrol motor from the 550i available in the 5 Series Touring.

BMW is also changing the standard specification of all 5 Series models, by fitting Drive Dynamic Control to all saloons and estates. This system, which allows drivers to personalise their car's ride and handling, will also offer an 'eco' mode on all four- and six-cylinder variants. This set-up will adjust throttle sensitivity, engine response, the gearshift points of the automatic transmission (where fitted) and the amount of power used by ancillaries such as the climate control and heated mirrors.

Other new features include Active Protection - which closes the side windows and sunroof, and tightens the seat belts if it detects a potential collision - and the ability to open the boot (or the estate tailgate) by a foot movement at the rear of the car. There are also upgrades to the optional night vision and head-up display.