* New Focus ST in action movie * Car not on sale until next summer * Ray Winstone and Plan B star alongside Focus ST... 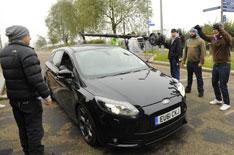 Ford's new Focus ST is playing a starring role in a new big-screen adaptation of '70s police drama The Sweeney.

The hot-hatch won't be on sale until next summer, but a black Focus ST has already been used by Ray Winstone (playing Jack Carter) and rapper Plan B (playing George Carter) during filming as they chase down gangs from London's underworld.

There are also cameo roles for other Ford models, with Galaxys, Mondeos and Transits all used as unmarked police vehicles.

The Sweeney is directed by Nick Love and will have its premiere in September.