* Mercedes will launch an A-Class SUV * Front- and four-wheel-drive options * Production-ready car by end of the year... 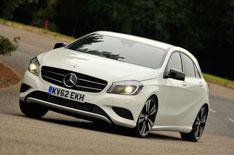 Mercedes-Benz will launch an A-Class SUV to compete with the Audi Q3 and BMW X1.

Both front- and four-wheel-drive options will be offered.

Dr. Dieter Zetsche, chairman of Daimler AG and head of Mercedes-Benz said that the new Mercedes A-Class SUV will be revealed before the end of the year.

It is likely that a concept car will be seen at the Geneva motor show next month, while the production-ready car will be unveiled at the Frankfurt motor show in September.

The GLA will join the recently announced A45 AMG and CLA, both of which are based on the same platform as the A-Class hatchback.

Prices and specifications for the GLA will be revealed nearer the car's on-sale date.