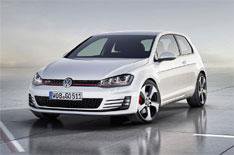 This is the new Volkswagen Golf GTI, which has just been unveiled at the Paris motor show.

The car is powered by a 217bhp 2.0-litre turbocharged petrol engine, which is around 10bhp from the power available in the current GTI.

A Performance Pack is a factory-fitted option that boosts power to 227bhp. VW says the pack also enhances the car's handling, because it includes a differential that reduces understeer. It also comes with larger front brakes.

The new GTI comes with a six-speed manual gearbox as standard, while a six-speed DSG gearbox is an option. Fitted with the manual box, the Golf GTI averages 47.1mpg, and emits 140g/km of CO2. An engine stop-start system comes as standard on both manual and DSG versions.

As in the new Mark 7 VW Golf, which goes on sale early next year, the new GTI comes with new safety and infotainment systems.

While the car on show in Paris is billed as a concept car, expect the production version to be largely unchanged when it goes on sale later next year.

The 12 best used Porsches you can buy