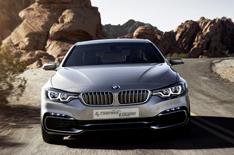 This is the BMW 4 Series Concept Coupe, which will be a replacement for the 3 Series Coupe.

The current BMW 3 Series Coupe is based on the previous-generation 3 Series saloon, but the company says the 4 Series is a big step forward from the existing 3 Series saloon.

This, says BMW, explains why the car is called the 4 Series, rather than simply the 3 Series Coupe. It is lower and wider than the current 3 Series Coupe and it has a longer wheelbase and shorter overhangs at the front and rear.

Other design features that mark it out from the 3 Series are a newly designed kidney-shaped grille and headlight cluster. The air intake beneath the grille is small in the middle of the car and becomes much larger at the sides.

BMW sources say the 4 Series Concept Coupe will closely resemble the production car that is expected to go on sale next summer.

The door mirrors on the concept car are unlikely to make it into the production car, however. These are attached to the window line of the car, rather than the door. There are fins on top of the mirrors which, says BMW, improve aerodynamics and acoustics. However BMW's head of design, Karim Habib, said elements of the mirror design could appear in future BMWs.

He said: 'We could have made cameras for door mirrors, but we chose to do something that has a function and could be used on BMWs in the future.'

No details on the engine line-up have been revealed, but a high-performance M4 will be made. However, BMW refused to speculate when it will go on sale.