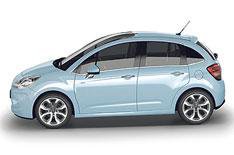 Citroen goes green and frugal with its all-new C3 supermini: 'a car for the reasonable consumption era.

With CO2 emissions of 99g/km, the cleanest C3 will have a 90bhp 1.6-litre diesel engine when it goes on sale early next year, but Citroen plan to add further models emitting just 95 and 90g/km during 2010.

Engine stop-start systems linked to automated manual gearboxes will be fitted throughout the range, and Citroen has worked hard to ensure that the new car is no bulkier or heavier than the one it replaces, despite providing more space and equipment.

'We introduced a penalty system on our suppliers if they didn't reach our weight targets,' a Citroen spokesman says.

New CO2-cutting 1.0- and 1.2-litre engines are coming as well, which will help make Citroen's emissions targets of 95 and 90k/gm feasible.

More sophistication
As with the present C3, only five-door models will be available, although the Mini-rivalling DS3 that Citroen plans to introduce at the Frankfurt motor show in September will be a three-door car. There is a new rear suspension system for both, mounted on subframes to isolate road noise.

Citroen says it designed the C3 with the principle that 'customers no longer talk about the distances they cover, but the amount of time they spend in the car'.

'Customers were changing even before the financial crisis started. Superminis were becoming the first choice for many. We had to put right the weaknesses of today's C3. Anyway, as a company, we are too attached to innovation to copy and paste the current car.'

Improved quality
There has been a big push to improve quality and style, and to make the cabin roomier, more airy and sophisticated.

The trim materials and design give the new car far more class than the current model and thinner seat and dashboard structures improve space while allowing the car to remain less than four metres long.

A 'zenith' windscreen - which stretches back over the roof is a distinctive design element. It lets more light into the cabin, but also shields it from heat. Citroen promising more 'innovative features', too.

Citroen says it will use the Ford Fiesta as a pricing benchmark, which would suggest a starting price a little under 10,000. The new C3 will go on sale in the UK in early 2010.

Deals: save thousands on Audis