Ford and Honda are both experts at making entertaining hot hatchbacks. But does the latest Focus ST have what it takes to topple the brilliant Civic Type R?...

New Focus ST’s price puts it into competition with the Type R, even though it isn’t as potent.

Entry-level version of our reigning Hot Hatch of the Year is going to be hard to beat.

You wouldn’t race a greyhound against a whippet, so why are we putting a 276bhp Ford Focus ST up against a 316bhp Honda Civic Type R? It’s a good question. After all, ST is Ford’s warm hatch brand. It’s the RS specials, like the previous Focus RS, that fit naturally with other greyhounds, such as the mighty Type R – our favourite of the current hot hatchback crop.

But before you go thinking that this is a forgone conclusion, it isn’t. Hot hatches are all about nuance. Yes, performance is a big part of their DNA, but it isn’t necessarily the determinant of how much stardust has been sprinkled upon them. That comes from other traits: the way the engine delivers its performance and whether the soundtrack stirs the soul, as well as how much dynamic sparkle the handling gives off. The ability to entertain, in other words. And Fords historically ace that sort of caper, making this far from an open-and-shut case. It’s all to play for. 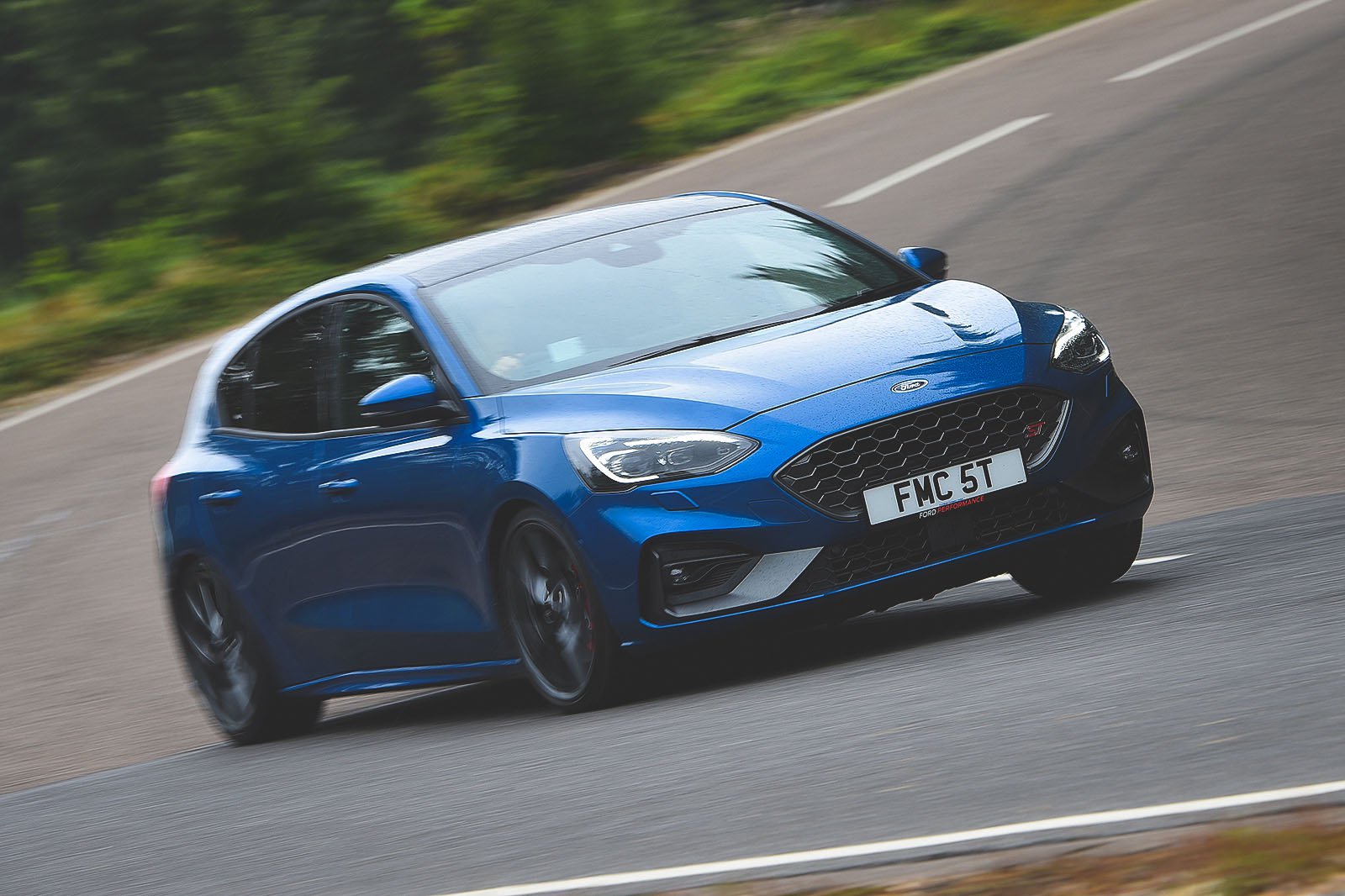 Let’s deal with the matter of their performance first. You’ve probably already gathered that the Type R is quicker, but by how much? Surprisingly, not a lot if you focus on their 0-60mph times. It was a wet day for our test, and when it comes to getting front-wheel-drive hatchbacks off the line, power mixes with water as easily as petrol. If anything, the conditions favoured the less potent ST. Both get a limited-slip differential – to help dispense their power more effectively to the road – but only the ST gets launch control, as long as you add the £250 Performance Pack.

Our test car had it, but let’s just say it proved about as useful as a short-sighted guide dog. With the system activated, the front wheels span up like a top and the tyres squealed. The old-fashioned method, of feathering the accelerator, proved far more fruitful. So did the ST’s more linear power delivery, which, like a Magnum ice cream, may be a little unadventurous but is consistent from top to bottom; you know exactly what you’ll get when you press down your right foot. It certainly contributed to delivering a decent time.

The Type R’s engine is far peakier. That makes it trickier to get off the line but also more interesting; there’s a reason to rev it out that’s missing from the ST. Think of it like a Fab ice lolly, with three distinct sections. Yes, it’s less responsive low down than the ST’s engine, but, like the strawberry bit, it’s still tasty. Still, you want to get higher up to the vanilla ice part, which comes in at around 2500rpm as the turbocharger excites and the Type R starts romping forwards, hard. Then, at 5000rpm, you get the chocolate sprinkles as Honda’s VTEC engine trickery engages, producing a final flourish of frenzied revs to the 7000rpm limiter. That’s some 500rpm higher than the ST’s.

That can all be deciphered from the in-gear figures. The more flexible ST is a little quicker from 30-50mph, but once the Type R’s explosive motor comes on song, it blitzes the ST from 50-70mph.

Speaking of gears, the ST’s six-speed manual ’box is slick, no question, and you can have an eight-speed dual-clutch automatic if you wish. The Type R is manual only, but you wouldn’t want anything else; you need to look at Porsches to find anything that changes gear as sweetly.

What about their important tailpipe notes? Ford has livened up the ST’s digitally through the car’s speakers, and it gets louder as you get into the sportier driving modes. You also hear volleys of pops from the exhausts when you back off. It sounds purposeful and archetypal of modern hot hatches but perhaps a little forced. So purists might prefer the honesty of Honda’s approach. The Type R has no digital enhancements; all you hear are the delights of mechanical whirrs from the engine, whooshes from the turbo and a bassy beat from its exhaust.

You can’t turn those off, though (whereas you can quieten the ST by selecting its Normal mode), so the Type R’s engine thrums away more boisterously at 70mph, whether you want it to or not. Still, that goes some way to hiding the wind and, in particular, road noise, which is much louder than it is in the ST. If you’ll be spending much of your time pounding motorways, bear that in mind. 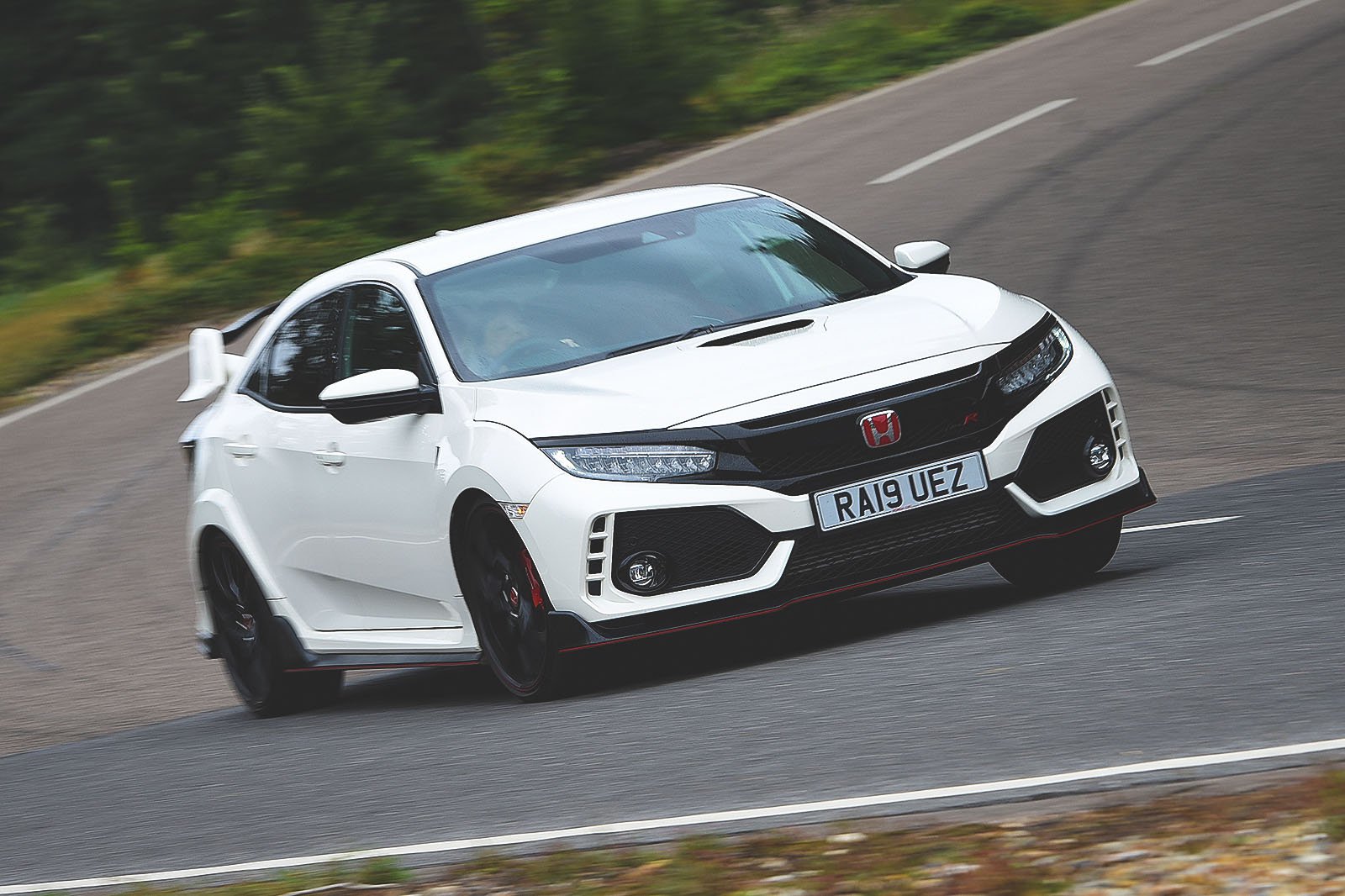 That said, the Type R’s rowdiness is counterbalanced by its calmer ride. Both cars come with adaptive suspension, which you can switch manually in the Type R, depending on whether you want a hard or soft ride. The ability to set up the suspension as you want in the ST is another feature added by the Performance Pack. Softened off, the ST is still firm and fidgety, but not harsh like the smaller Fiesta ST. Generally speaking, it deals with potholes ably and patters along motorways pretty well.

Then you get into the Type R and realise that ‘pretty well’ can become ‘unbelievably well’, at least for a hot hatch. Regardless of the type of bump and the speed at which it’s struck, the Type R manages to dampen the jitters and absorb the impacts better.

Switch the Type R to Sport mode, though, and that suppleness morphs into penal levels of control. It stays elastic enough to keep the body resolutely stable over troughs and crests while containing body lean better than the ST. The ST’s setup is still impressive next to the similarly powerful Hyundai i30 N’s, but it misses out on some of the Type R’s stability, getting pitched about over uneven surfaces. On the way into corners, that inspires less confidence.

Both their limited-slip differentials work tirelessly to manufacture traction from the front wheels out of corners, and neither car is short on outright grip. The Type R has more, though, and a more neutral balance that instils further assurance. You can still fine tune its line by backing off mid-corner, but the ST is livelier, playfully swinging its rear end around if you lift off the accelerator. Some will find that more thrilling in a road car, while the Type R’s setup feels nearer to a well-sorted racer.

Neither car has ideal steering. The ST’s is more tactile, faithfully feeding you messages about the road surface beneath, but its unnatural weighting undermines your ability to affect seamless, flowing turns. The Type R’s steering lacks the delicate communication of its rival, but its better speed and weighting allow subconsciously fluent sweeps of the wheel through every corner.

Both cars offer a firm and progressive brake pedal, but the Type R’s is fractionally more reassuring and delivers a shorter stopping distance from 70mph.