New electric Porsche is a four-seat sports car with up to 751bhp. But is it better than the bonkers-fast Tesla that made electric cars desirable in the first place?...

Here’s some language fun for you: a person who loves food and drink is called an epicure. And any knowledgeable epicure wouldn’t match red wine with fish, much as a petrolhead might balk at us pitting a luxury car against a sporting GT. Yet this test does follow etiquette rules, we promise.

Not that there’s any petrol involved – sorry, petrolheads. Instead, both cars are fully electric, but while the Tesla Model S Performance is a luxury car of sorts, its ‘Performance’ designation is key. It’s marketed as a performance car, complete with a Ludicrous Plus Mode and, now, a new Cheetah Stance, which, in simple terms, makes it accelerate like billy-o.

So, pitting it against the new Porsche Taycan Turbo actually makes perfect sense. Yes, the Taycan is more of a sporting GT, but it's still very much a performance car. It’s uber-fast and, like the Model S, has up to five seats and a decent-sized boot. 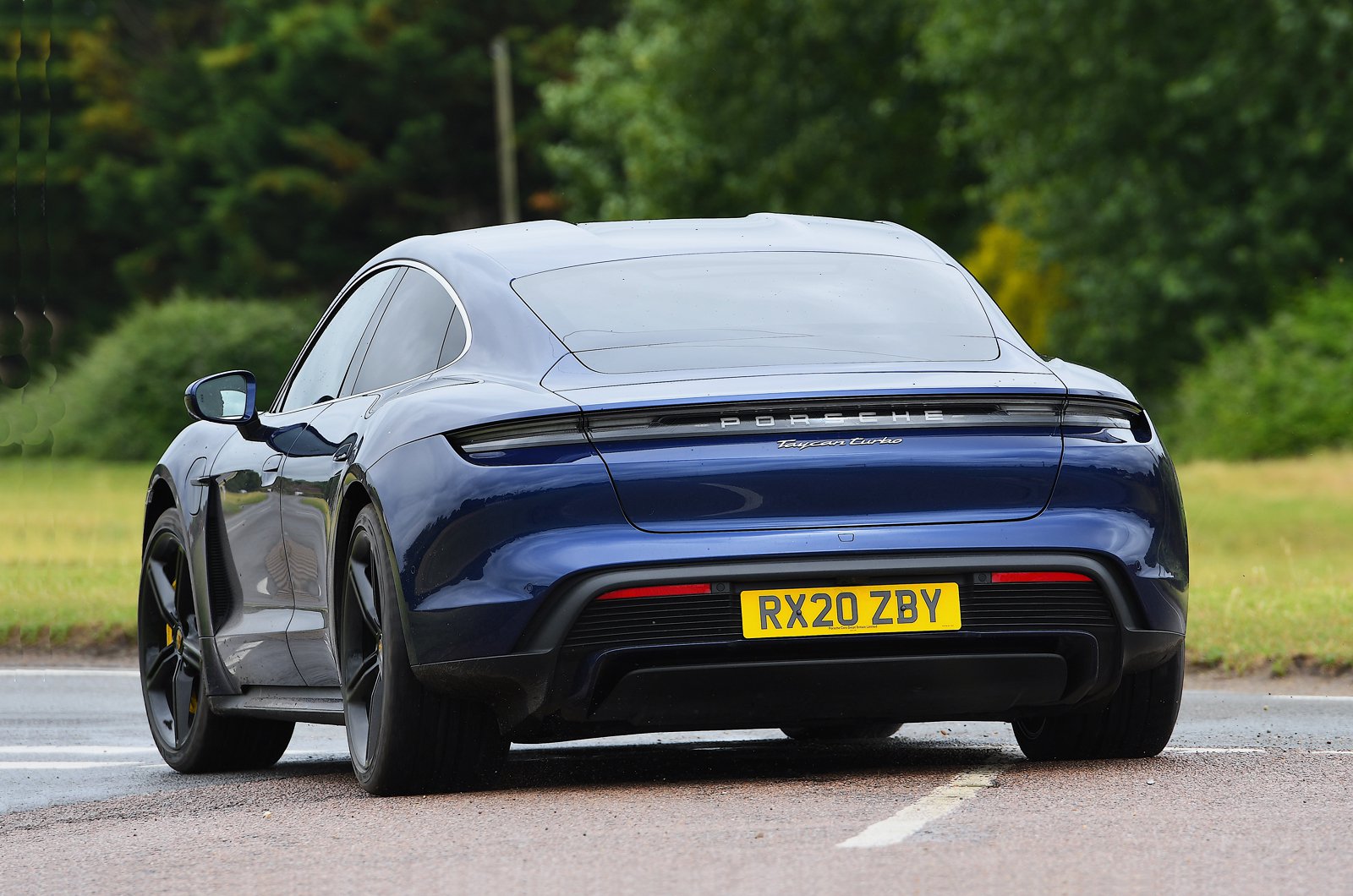 If one thing defines the performance of electric cars, it’s their incomprehensibly instantaneous response. Stamp on the accelerator in a petrol car (even a supercar) and it’ll take a moment to wind itself up. By contrast, these two switch on acceleration like it’s a light bulb. And if you keep your foot pinned, the force acting on you is immense; imagine gravity suddenly changing its mind and starting to work horizontally.

So, how fast are they? Well, activate their launch modes and from 0-60mph the Model S posts a time of… wait for it… 2.8sec. And that was on a damp track. The Taycan, meanwhile, managed 3.1sec in the same conditions, but keep the clock counting on to 100mph, as we did, and the Taycan forges ahead, hitting ‘the tonne’ in 6.9sec to the Model S’s 7.2sec. Both cars were happy dispensing that kind of performance over many runs. In a more real-world scenario, from 30-70mph, they’re identical: 2.4sec. Think about that for a moment. Let’s just say that caravaners or Sunday drivers won’t hold you up for long. 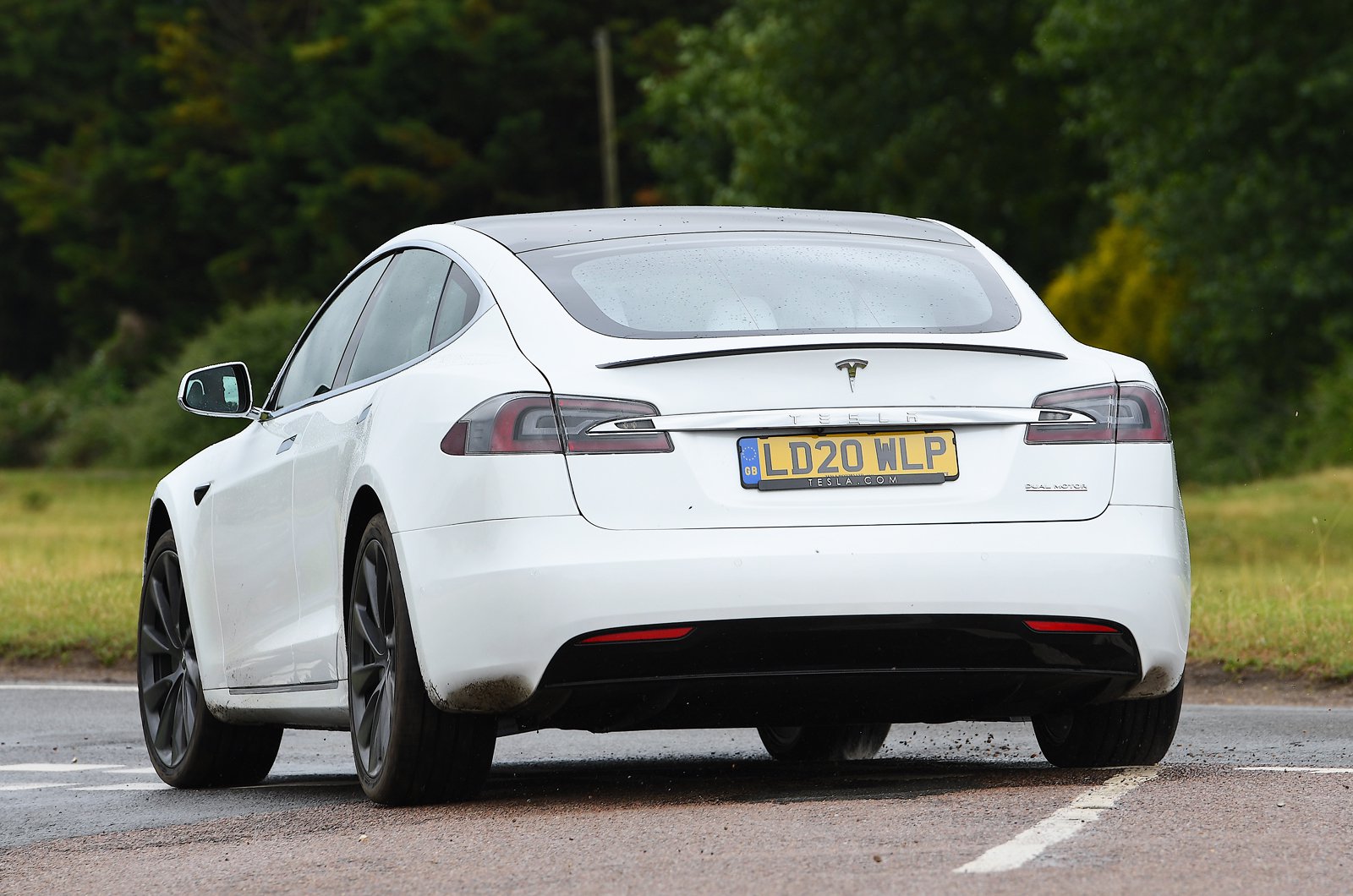 Both have four-wheel drive, so in a straight-line sprint you’re not wrestling for control, like Andy Green in his Thrust SSC en route to the land speed record. They track straight and true, but reach a bend and there’s a divergence in the experience.

Performance cars are as much about handling as they are about straight-line acceleration, and the Model S is very capable and surefooted in corners. It musters lots of grip and pretty accurate steering, which has three different modes to let you tailor its weight – the midway setting is best. But even if you pop its air suspension into the firmest setting, the Model S leans more than the Taycan, and its body is less settled over any cambers and ridges grafted into the road’s topography.

The Taycan is next level. It also has air suspension as standard, but our car had the optional Porsche Dynamic Chassis Control Sport system fitted (£2315) to tie it down even more. Whichever mode you have it set to the Taycan is far more composed, so it flicks left and right on demand like a hare with a terrier on its tail. There's just one setting for the steering, but it's perfect: beautifully weighted and full of sensations, which rise up to your fingertips to indicate the amount of purchase at the front wheels. The end result is that, for a large car, it shrinks around you and goes precisely where you ask, plus or minus zilch. 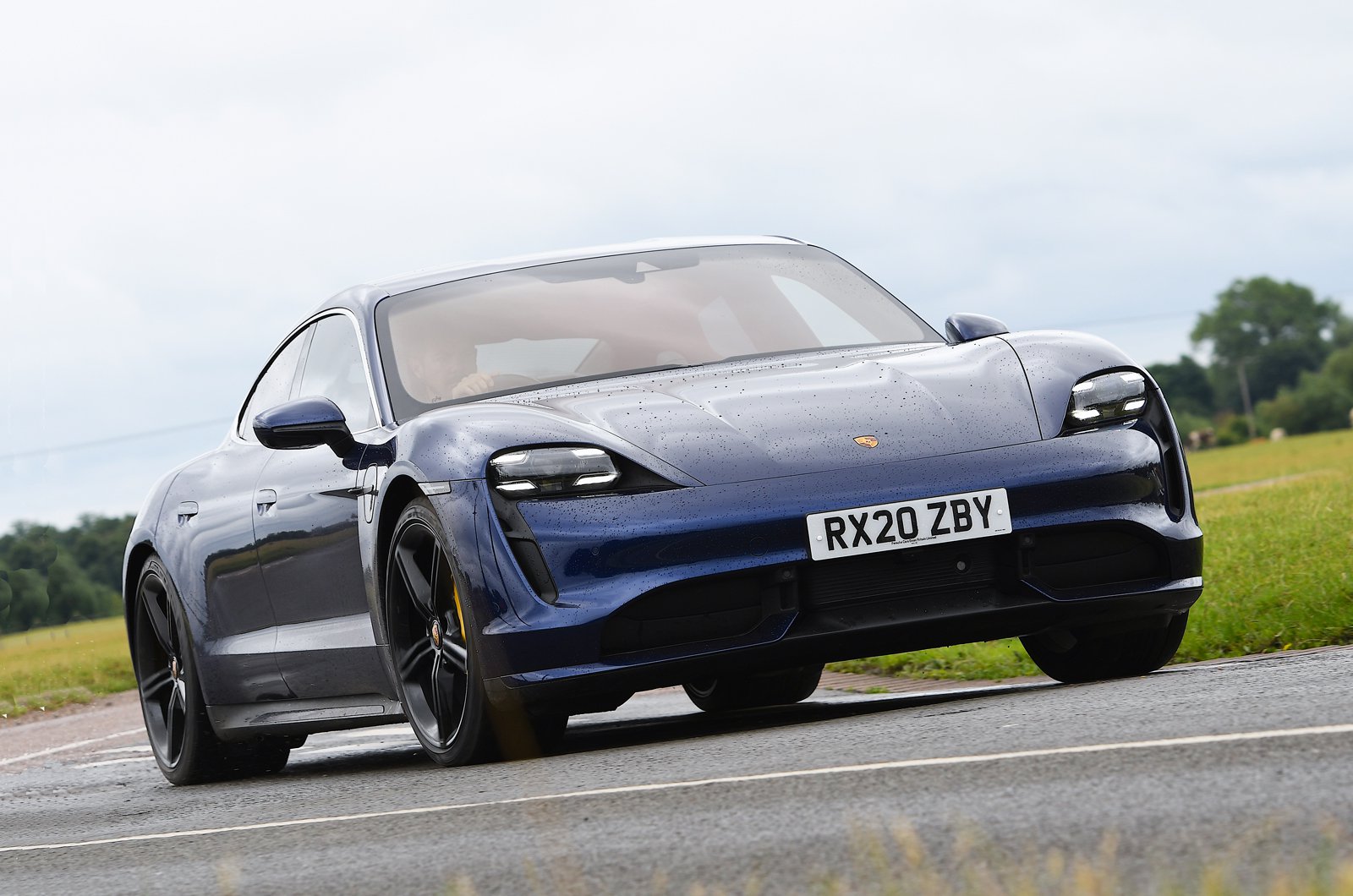 So, the Model S isn’t as razor sharp, but an electronic stability control system keeps it in check. You can feel this working hard to manage the trajectory and you cannot turn it off. You can in the Taycan, and, if you do, you’ll discover even further depths of genius: a graceful balance that’s like no other electric car we’ve driven. It’s a car – note, that was a car, not just an electric car – that you’ll drive for thrills, rather than simply to get somewhere.

There is one thing missing from both, of course: no thumping V8 or sizzling flat six to stir the soul. There is the option of a fake engine noise generator in the Taycan (£354), which sounds interesting. You can turn it off, which leaves you with more motor whine around town than you get in the Model S.

At speed, over coarse surfaces, there’s also more rumble from the Taycan's tyres, but this is far from consuming and less pronounced than in a 911, for example. In fact, overall the Taycan isn't much noisier at a steady cruise than the Model S, due to the amount of wind you hear in the latter – most of it emanating through the climate control vents. 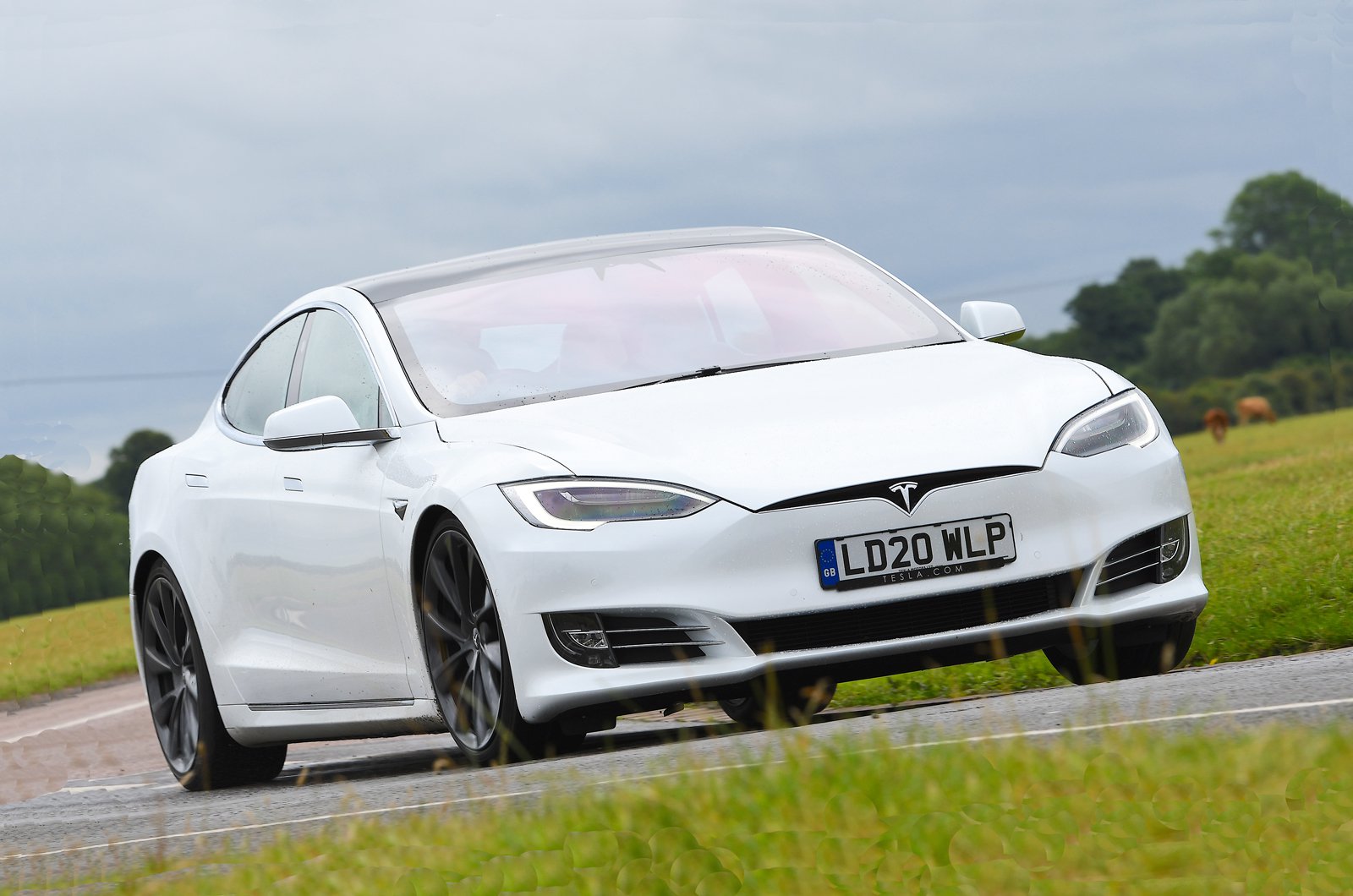 Both have well-graduated brakes for electric cars. The Taycan puts energy back into the batteries when you hit the brakes, as most electric cars do, but the interference is minimal. The Model S’s brakes work just like a regular car’s, with all its energy harvesting coming simply by lifting off the accelerator. The decelerative effect is so strong that, during normal driving, you barely need to use the brakes at all.

You might be expecting the sportier Taycan to ride like it’s wearing solid tyres, but far from it. Even though it’s firmer than the Model S, the level of engineering sophistication embedded within means it doesn’t thwack over potholes, while aftershocks  – large or small – are damped away far quicker. There’s a bit more suspension noise, but it’s really very comfortable.

The Model S lacks the Taycan’s polish. Initially, its softer set-up makes you think it’ll be even better, but then it clumps clumsily over raggedy roads, and, because it’s not as well damped, bobs and pitches to a greater extent over any furrows and folds. Fortunately, those traits are less pronounced at speed, so it’s still a very comfortable long-distance cruiser.