* Set to be first Volvo fitted with self-driving technology * Revealed next year, on sale in 2015 * Could become a five-seater... 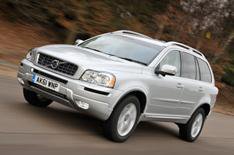 The replacement for the Volvo XC90 SUV will be revealed next year, although it won't go on sale until 2015.

It is set to be the first Volvo fitted with self-driving technology, including an 'Adaptive Cruise Control with Active Steering' system.

This is a system that will autonomously steer the car and keep it moving in pace with other vehicles in low-speed conditions such as heavy congestion. A similar system is set to be available in the new Mercedes-Benz S-Class.

More advanced autonomous driving concepts, such as platooning where cars electronically connect to one another and are then driven by a single lead vehicle should be ready within 5-6 years.

Volvo believes that as many as 50% of drivers are willing to consider autonomous driving, suggesting that the technology has a viable future. Volvo's vice-president of product planning, Toscan Bennett, told What Car? that the company intends to sell a car with the equipment fitted where it is legally allowed to do so.

Precise details are not yet available on the new XC90, but Bennett said that it will offer 'all the strengths that make the current car so appealing to buyers'.

However, he also made reference to the current trend for downsizing, suggesting that seven-seat SUVs are not necessarily as popular as they once were. A five-seat XC90 is a possibility, therefore.