More for you |
Secrets of a paramedicWATCH: 2020 Polestar 2 review – better than a Tesla Model 3?Cars that are cheaper to buy on finance than with cashNew issue of What Car? magazine on sale nowBest used coupes for less than £10,000 (and the ones to avoid)
Home
News
Performance cars - 1
news 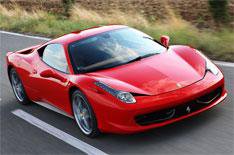 In the race with McLaren to market, the Ferrari 458 Italia will come first and race the 458 certainly can. It has a backbone of bonded aluminium, with a 4.5-litre V8 at its heart hence the 458 name which can fling it from 0-62mph in 3.4sec.

The 458 also uses a semi-automatic gearbox and has intelligent brakes that move the brake pads towards the discs when you come off the throttle. Unsurprisingly, it has incredible stopping power.

Its a car that grips, turns and stops like you wouldnt believe, rides like a dream for a 200mph-plus supercar, and lets you choose how much electronic assistance you want. In short, its phenomenal.

Phenomenal is also a word you could apply to McLarens amazing-looking supercar (right). The MP4-12C is built around a new carbonfibre tub design, and has a Formula One-inspired, seven-speed semi-auto gearbox. Since McLaren has a fair bit of F1 experience, we reckon itll be pretty good.

The 3.8-litre engine produces around 600bhp, but perhaps the most interesting performance figure to consider is this: McLaren says the MP4-12C has the best power-to-CO2 output of any car on the road, including a Honda Insight or Toyota Prius.

Although there are no acceleration figures just yet, the MP4-12C is going to be very fast, so itll need good brakes. It has them an airbrake is deployed during high-speed braking that alters the aerodynamics of the car, providing more downforce (and therefore grip) over the rear tyres.

Mercedes-Benz SLS AMG
Price from 155,000 (est)
On sale Summer
What is it? A very modern, old-fashioned-looking supercar

Whether you think this is a good-looking reinterpretation of the famous 300SL or not, theres no getting away from the fact that the SLS is swift. Its 6.2-litre 563bhp V8 engine punches the car from 0-62mph in 3.8sec, and on to a limited top speed of 197mph.

Aluminium is the main material of choice for both the chassis and the body, but a carbonfibre driveshaft and seatbacks made of magnesium also help to keep the weight down, but it still weighs 1620kg.

A seven-speed semi-auto transmission does the job of sending the power to the 20-inch rear wheels.

Weve already had an opportunity to drive the SLS awesome, but brutal is editor Steve Fowlers verdict catch up with his video blog on the car at whatcar.com.

Weve lost count of how many times the LFA concept car has appeared at motor shows, but the production car finally made its debut at the Tokyo show late in 2009.

Just 500 of the carbonfibre cars will be produced, with two of the 17 allocated to the UK already ordered.

Despite the stats, many may feel that its Ferrari money for a car from a brand thats yet to prove itself in supercar territory.

Yes, if youve got more money than you know what to do with, you might want to get the highest-priced new road-going Aston Martin ever made.

Unveiled at the Concorso dEleganza in Italy, the One-77 will be sold to people who want to keep the car rather than sell it on for profit, according to Aston Martin.