Porsche Panamera to launch in China

* Debut at Shanghai motor show * Initially available with V8 engines * Prices from around 50,000... 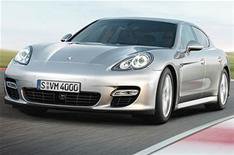 The much-anticipated Porsche Panamera will make its public appearance at the Shanghai motor show in April.

The four-door grand touring sports car will initially be available this summer with both turbo and non-turbo V8 engines, linked to a six-speed manual or a seven-speed semi-auto gearbox.

Launch dates for the lower-powered V6 and hybrid versions have yet to be announced.

Prices are expected to start from around 50,000.