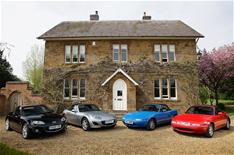 The Mazda MX-5 has been the world's best-selling roadster for 11 years, and but will hit a new benchmark today when the 900,000th will be built.

Production started in April 1989, so it has taken Mazda 21 years and 10 months to reach the milestone.

The MX-5 officially became the best-selling roadster in May 2000 when production reached 531,800, an achievement ratified by Guinness World Records.

Mazda is currently offering discounts of 20% on the entire MX-5 range to buyers that collect a special voucher on the smartphone with the latest Facebook app.