The 911 Cabriolet weighs 70kg more than its hard-top sister, due to the structural stiffening Porsche has added to make up for the loss of a fixed roof, but you won’t feel this in the way it performs. It’s ability to pin you back in your seat when you put your foot down is nothing short of crushing, and that’s not even the most impressive thing about it.

Only the Carrera S and Carrera 4S variants are available at the moment. With an engine that delivers its peak torque (all 391lb ft of it) from just 2300rpm, you could be mistaken for assuming the 911 Cabriolet doesn’t like to be revved. However, unlike so many modern turbocharged engines that quickly run out of puff, the 911’s twin-turbocharged flat-six feels utterly relentless all the way to its relatively heady 7500rpm redline.

It makes the 911 Cabriolet so quick, in fact, that you really appreciate the speed and smoothness of its dual-clutch automatic gearbox, which ensures that the car never feels unbalanced, even if you happen to change gear mid corner. It really is in another league compared with traditional auto ’boxes such as the one found in Jaguar’s F-Type, even if the sheer number of gears (eight) means you sometimes have to pull the downshift paddle several times when braking into corners or overtaking in manual mode. A traditional manual will join the range later.

As standard, both the Carrera S and Carrera 4S come with 20in wheels at the front and 21in at the rear. They're huge, yet – despite the shallow sidewalls of the tyres they’re shod with – the 911 Cabriolet does an impressive job of cushioning you from battered road surfaces, as long as you avoid the firmer Sport setting.

True, it’s no magic carpet, but for such a focused car it’s surprisingly comfortable. Confronted by a series of challenging crests and dips, it remains remarkably flat and stable when many rivals would throw you around in your seat.

This smoothness is even more impressive when you consider that we have so far only tried the car with the optional ‘sport chassis’, which drops the ride height by 10mm. 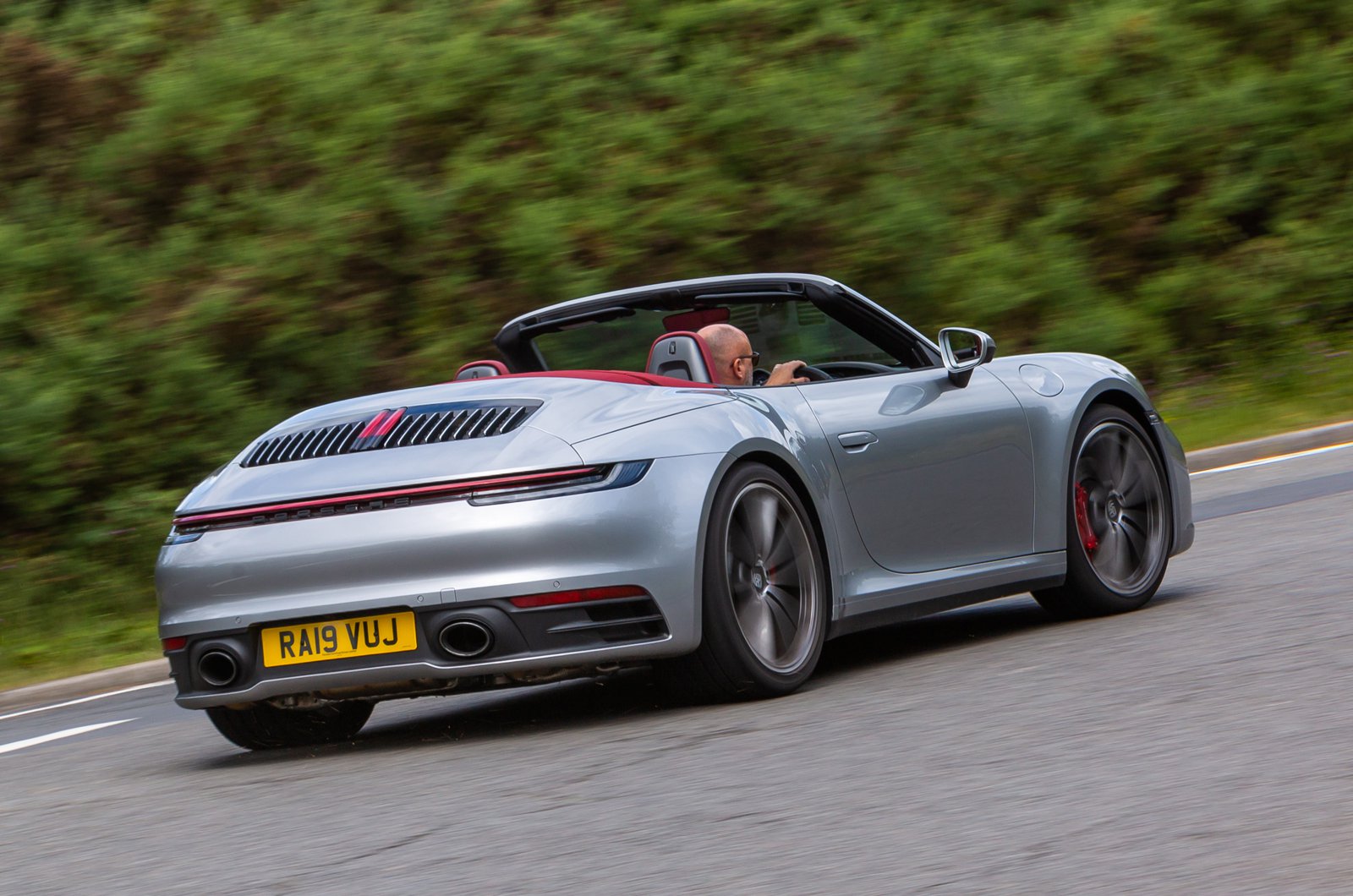 A long, twisty road is the habitat in which the 911 Cabriolet really stands out from the competition. Body lean is virtually non-existent, while beautifully weighted steering that’s both communicative and linear in its responses means you can can push right up to the limit of adhesion with utter confidence – something that can’t be said about the Jaguar F-Type or Mercedes-AMG GT Roadster.

Of the two versions available, the rear-wheel drive Carrera S is the fractionally more engaging. Its steering is that little bit smoother and more consistent thanks to its front wheels being unburdened by having to transmit power to the ground. And, with no driven front wheels pulling you out of corners when you pile on the power, the S is also a bit more playful should you decide to slacken the stability control’s grip.

Does all this mean the Cabriolet drives every bit as well as the 911 Coupé? Well, not quite. Really rough roads do send slight shudders through the Cabriolet’s steering wheel, but this really is as rigid as four-seat convertibles get.

While the 911 Cabriolet’s wide tyres give it epic traction off the line and out of corners, there is a downside; considerable road noise, particularly over coarse road surfaces.

More positively, cars with the optional sports exhaust make a full-blooded and thrilling noise when you put your foot down. And when you’re not in the mood, you can switch this feature off to ensure that the engine never gets too boomy or intrusive.

In addition, the standard electrically operated wind deflector makes it possible to hold a civilised conversation with your passenger at motorway speeds with the roof down – assuming you’ve got all the windows up.