All versions have a height-adjustable driver’s seat as standard. On SE Technology trim and above (and standard on range-topping Laurin & Klement models) you get the option of electrically adjustable seats with lumbar support and a memory function. A large, adjustable centre armrest is standard across all models. One fly in the ointment is the steering wheel: it adjusts manually for height as well as reach, but some drivers find that it obscures the top of the instruments unless the wheel is set unnaturally high. If you don't like the sound of that, you'll find that the Volvo V60 has one of the best driving positions an estate can offer.

Otherwise, the dials are clear and the dashboard is well laid out, with all the major buttons easy to reach. Skoda’s Virtual Cockpit is standard on Laurin & Klement trim and optional on all other models and gives you a 10.3in digital display in place of conventional analogue instruments. It’s customisable and among its tricks is the option to display full-screen sat-nav maps and media info – it's fairly pricey but worth considering.

There’s a clear view forward, thanks to fairly slim windscreen pillars, while large mirrors give a good view of what’s coming up alongside. SE and SE Technology trims come with LED dipped-beam headlights, while SE L trim and upwards have excellent Matrix LED headlights that enable main beam to be permanently selected without dazzling other road users.

Upright rear pillars and a broad rear windscreen mean the view behind is also good, but the Superb Estate is a long car, so it's great that all versions come with front and rear parking sensors as standard. And for particularly nervous parkers, you can also add a rear-view camera (standard on Laurin & Klement), or a Park Assist feature that recognises suitable spaces and steers the car into them. You can also have a heated front screen, for clear vision on frosty mornings. 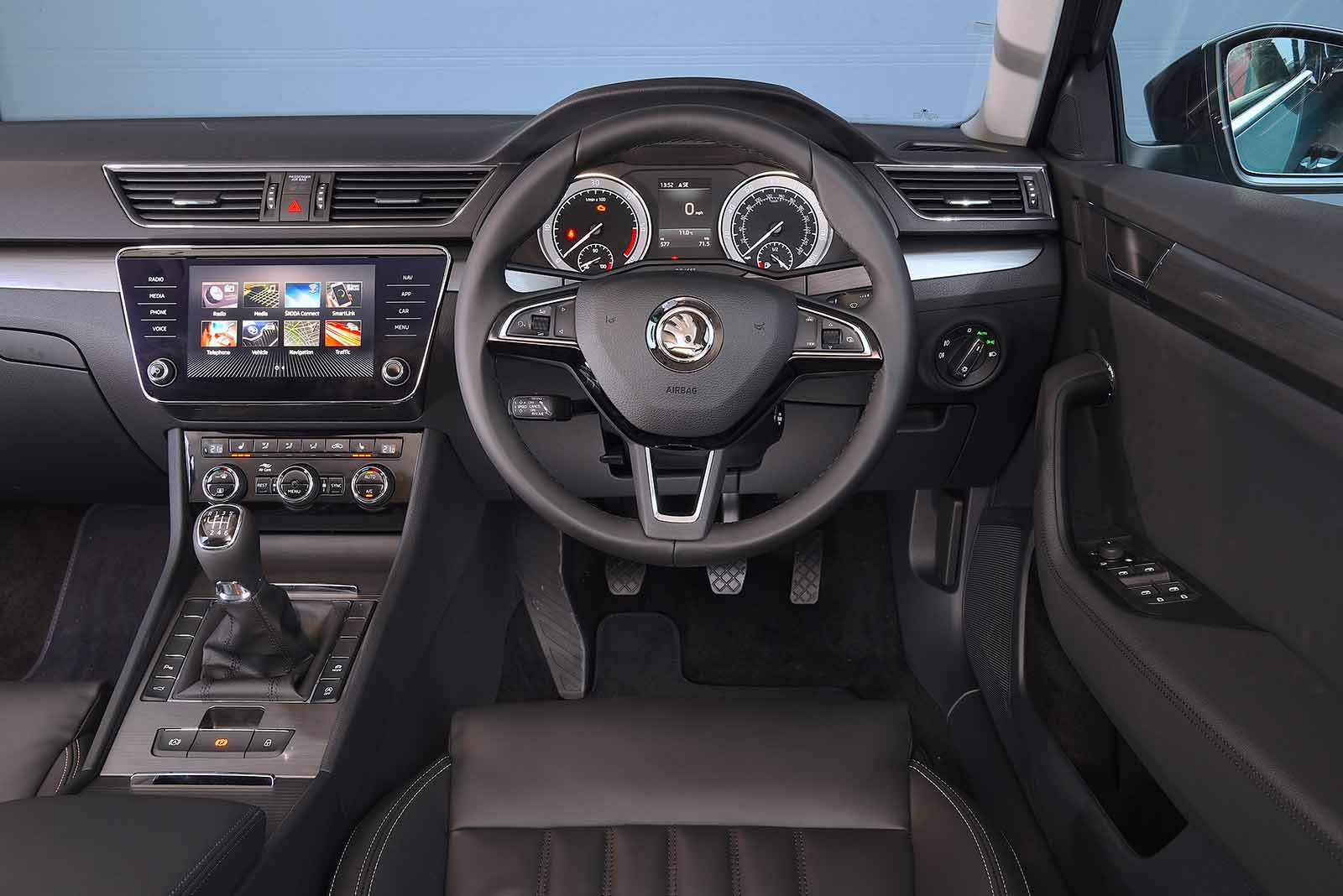 Entry-level SE trim gets an 8.0in touchscreen infotainment system with a basic level of functionality – you get Bluetooth and DAB radio and that’s pretty much your lot. You can, however, upgrade to a system with in-built satellite navigation and integrated wi-fi (this system comes as standard on both SE Technology and SE L trims), while Sportline Plus and Laurin & Klement models benefit from an even larger 9.2in touchscreen that can display 3D maps through the in-built sat-nav as well as Apple CarPlay and Android Auto smartphone connectivity. The latter system is also available as an option from SE Technology trim and up.

Both versions have sharp screens, easy-to-follow menus and software that's healthily responsive to your commands. The buttons around the screen make flitting between menus quicker but it’s annoying that they're touch-sensitive rather than the conventional type – they’re not as easy to find while driving as physical buttons. Still, some of the features can be controlled via the simple steering wheel controls.

Overall the Superb's infotainment systems are much better to use than the Mondeo's, and very similar to the Passat's. The best system in the class is BMW’s iDrive, though, which has a rotary controller that's less distracting than a touchscreen on the go. Music lovers, meanwhile, may appreciate the upgraded 12-speaker, 610W Canton sound system that’s standard on Laurin & Klement trim and optional on all other models.

It’s difficult to fault the Superb Estate for quality, particularly for the price. Its exterior panel gaps are tight and its doors close with a reassuring thud. Inside, the materials are generally tip-top and appear well put together. Attention to detail impresses, too: there are pleasant soft-touch materials on the upper interior surfaces, carpeted door bins and rubber-lined cubbies. Any harsher materials are generally restricted to the lower surfaces.

The Superb's switches are well damped and the classy fonts on the dials look swish. It might not be as plush inside as the BMW 3 Series Touring or Volvo V60, or as beautifully executed as an Audi A4 Avant, but the Superb's interior surfaces feel barely any worse than those of a Volkswagen Passat Estate and much more premium than the Ford Mondeo Estate.