It's best to avoid the 1.6 TDI 120 because it's too lethargic, and try instead the 148bhp 1.5 TSI 150 petrol; it's far livelier and gutsy enough to cope with a car of this size. However, the 148bhp 2.0 TDI 150 diesel is better still and our pick of the range. You don't have to work it as hard to make brisk progress and it'll also pull big loads or tow a caravan more easily, so it's a perfect fit for a load-lugger of this size. Plus you'll find it’s quicker than equivalent versions of the Ford Mondeo, and so good that you don't need to pay the extra for the even sprightlier Superbs – the 2.0 TSI 190 petrol and 2.0 TDI 190 diesel – unless you really fancy some extra welly.

If diesel is not your thing, but you have an eye on efficiency, then the plug-in hybrid 1.4 TSI iV 218 comes highly recommended, too. This uses an 85kW electric motor paired with a 1.4-litre petrol engine for a total power output of 215bhp. It's one of the quicker versions of the Superb (0-62mph takes 7.7sec), but also has an official electric-only range of 35 miles.

By far the most powerful engine in the lineup is the 276bhp 2.0 TSI 272 petrol. It's available only with the automatic gearbox and four-wheel drive, and will suit those that appreciate a wolf in sheep's clothing – it delivers stonking performance with the 0-62mph dash covered in just 5.7sec, which rivals borderline-performance estates, such as the BMW 340i Touring.

With the standard suspension fitted and smaller wheels, the Superb Esate is relatively comfortable, even when compared with the supple Ford Mondeo Estate. It soaks up large speed bumps and expansion joints with ease and settles down nicely on a motorway cruise. Because it's set up to be quite soft, though, the Superb is prone to feeling floaty on undulating country roads, and it can bash over really nasty potholes.

Dynamic Chassis Control (DCC) is Skoda's term for adaptive suspension, and it's optional on all models from SE (and standard on Range-topping Laurin & Klement models). It gives you Normal, Sport and Comfort modes, the latter being the softest. To imagine what the Superb is like in this mode, imagine laying on a motorised waterbed and bobbing gently up and down as a series up bumps pass beneath you. Selecting Normal and Sport modes tightens everything up, but leaves passengers exposed to road surface imperfections.

Whichever setup you choose, it’s best to avoid the larger 19in alloy wheels that come as standard on Sportline Plus models. These make the ride more fidgety and prone to thumping over large intrusions and is even more pronounced on four-wheel-drive versions. 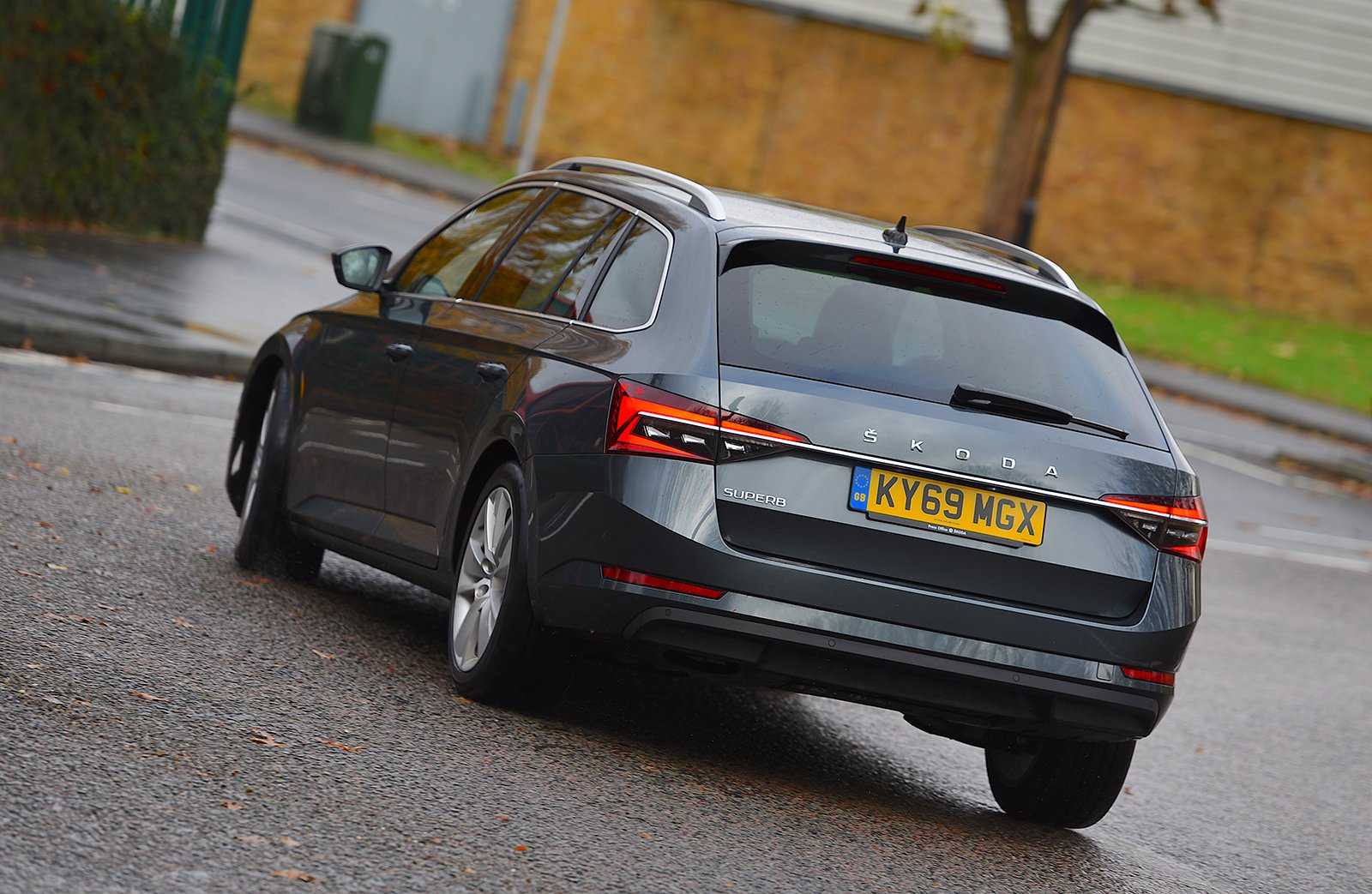 The Superb Estate offers safe, secure and predictable handling, but it's geared for comfort not careering around corners. The two-wheel-drive versions have plenty of grip, while four-wheel drive, which is available with the 2.0 TDI 190 and mandatory for the 2.0 TSI 272, provides added traction and better stability on greasy winter roads.

The steering is quite light, especially at low speeds, which helps when manoeuvring in town. It gets a little heavier as you gain speed but offers little of the feedback and connection to the road that comes with sportier executive offerings. Sportline Plus trim has ‘progressive dynamic steering’; this varies the weight according to how much steering lock you apply and is the closest the Superb gets to feeling sporty.

The Volkswagen Passat Estate is a little more inspiring on a twisty road, but all-in-all, enthusiastic drivers will much prefer the premium competition, such as sportier versions of the Audi A4 Avant and BMW 3 Series Touring, all of which are more thrilling to drive.

At speed, you’ll hear a flutter of wind noise from around the Superb Estate's windscreen and door mirrors. The larger wheels and tyres also kick up extra road noise, including noticeable tyre slap over motorway expansion joints. There’s some noise from the suspension as well, but these quibbles could be levelled at any of the Superb’s chief price rivals, such as the Mondeo Estate, and don’t prevent the car from being a relaxed cruiser. Without question, though, a BMW 3 Series Touring or Audi A4 Avant is better if you favour superior high-speed isolation.

The diesel engines produce a bit of vibration through the pedals and steering wheel. They're also slightly gruff under hard acceleration, but settle to a distant hum at cruising speeds. By comparison, all the petrol engines are pretty smooth and quiet – including the plug-in PHEV model, which has the ability to run near-silently on electricity alone.

The manual gearbox has a slick gearchange and a positive clutch action, making it easy to drive smoothly around town. On the other hand, the dual-clutch automatic gearbox (offered