Delivering decent low-rev pull, the B5 diesel is a relaxed performer and makes getting up to motorway speeds an effortless experience. Rivals such as the Audi Q7 45 TDI and BMW X5 30d – which both have larger engines – are ultimately faster, but not by a great deal.

The entry-level petrol is, confusingly, also called the B5 petrol. It needs to be worked harder than the diesel, but when you do so it can manage 0-62mph in 7.7sec (that’s just a tenth of a second slower than the diesel), while the more powerful B6 petrol will manage the same sprint in just 6.7sec. Overall, though, the diesel is a better fit for the XC90 thanks to its extra urgency at low revs.

Meanwhile, the plug-in hybrid T8's combination of a petrol engine and electric motor makes it properly quick; it's easily the fastest XC90 you can buy, racing from 0-62mph in just 5.8sec. The T8 also has a similar pure electric range to plug-in hybrid versions of the Range Rover Sport and Land Rover Defender; it can officially do up to 31 miles on a full charge although you'll be lucky to get more than 25 miles in the real world. The BMW X5 45e has a much longer pure electric range.

At low speeds, with the standard non-adjustable suspension, the XC90 tends to pick up on cracks, bumps and potholes a fair bit more than its standout rival, the Audi Q7. However, the ride becomes smoother at higher speeds. You’ll still feel the odd expansion joint thump through the base of your seat, but the big Volvo generally settles into a pretty comfortable motorway cruise.

The optional air suspension costs quite a bit. While it offers better absorbency over large lumps, such as speed humps, it doesn't improve the ride to any noticeable degree on patched-up city streets – you’ll still feel a harsh thud when you strike something sharp-edged. We’d save the expense and stick to the standard set-up. Meanwhile, the T8, despite the increased weight from its heavy batteries, manages to remain as comfortable as lesser XC90s.

Whichever model you choose, we suggest going for the smallest wheels possible. Essentially, the smaller the wheel, the more comfortable your XC90 will be. We’d stick to 19in or 20in wheels where possible, and avoid the vast optional 22in ones at all costs. 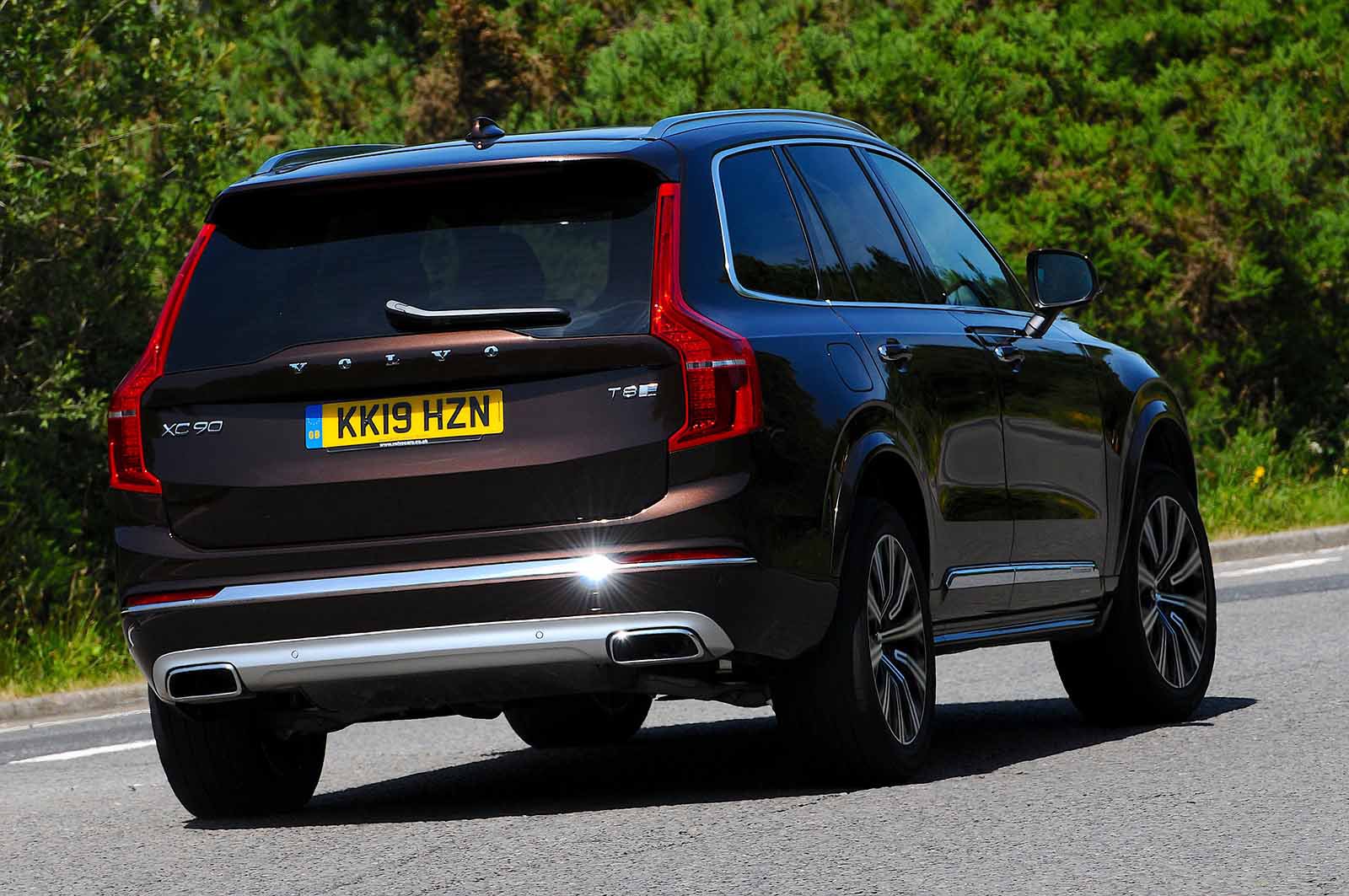 The XC90 can’t match the sportier BMW X5 and Porsche Cayenne for outright handling finesse, but it’s similarly wieldy as the Q7 and much sharper to drive than the wallowy Land Rover Discovery or Defender. There’s minimal body lean unless you really throw it about, and it never feels like it’s going to topple over around a series of bends.

There isn’t much feedback through the steering wheel, but turn into a corner and there's enough weight build-up to instil confidence, and to help you place the car accurately on the road. The Q7, X5 and Cayenne are better still in this regard, though; the XC90’s steering can feel a little sticky when you need to make small course corrections, such as when driving on the motorway.

While you’re unlikely to tackle a series of B-roads just for the hell of it in the XC90, it’s good to know both suspension options (standard passive springs or optional air suspension) deliver impressive body control. For such a tall car, the Volvo stays pretty level through turns and has plenty of grip. The T8 hybrid has a greater tendency to sway about in bends, due to the weight of those heavy batteries, but is still more agile than other big plug-in hybrid SUVs, such as the BMW X5 45e and Mercedes GLE 300de.

With its ability to run on electric power alone, the T8 is the quietest XC90 when pootling around town. Push on a bit harder, though, and you’ll notice the petrol engine kick in, but even then it’s still far from unrefined. EV mode hush aside, the petrol B5 and B6 are much the same: quiet at low speeds, but make themselves heard as the revs rise without ever sounding harsh.

The diesel B5 makes the most noise at all speeds, sounding particularly clattery at idle and when accelerating, and sends more vibration back through the controls than the petrols. Judged alongside the ultra-refined 3.0-litre diesel engines in the Q7, Discovery and Mercedes GLE, it’s rather coarse, although the XC90’s near-instantaneous start stop system does make urban driving less of a chore. All XC90s come with an eight-speed automatic gearbox that responds pretty promptly, requiring much less of a wait than that of the Audi Q7.

Wind noise is relatively well suppressed in the XC90, but road roar from the tyres is nowhere near as well contained as in a Discovery or Q7. Suspension noise is also an issue, you’ll hear noticeable crashes and thumps over larger bumps, such as potholes and expansion joints. Thankfully, these impacts sound much worse than they feel.

All XC90s come with an eight-speed automatic gearbox that responds pretty promptly, requiring much less of a wait than that of the Audi Q7. Under light acceleration it’s smooth, although the changes become much more pronounced when you put your foot down.