When picking an engine for your Alfa Romeo Stelvio, we suggest sticking with diesel; there are two 2.2-litre units offering 187bhp or 207bhp. All versions are responsive from low revs and pull strongly throughout the whole rev range, whisking you up to motorway speeds with ease. The 187bhp engine (badged as the 2.2 Diesel 190) provides a good compromise between power and costs, with smooth yet responsive performance – it takes a respectable 7.6 seconds to reach 62mph from a stop. The quicker 2.2 Diesel 210, which is only available in range-topping Veloce trim drops that time to 6.6sec. Both engines are quick by class standards compared to equivalent diesels in rivals like the Audi Q5, BMW X3 and F-Pace.

There’s also a pair of 2.0-litre four-cylinder petrol engines. The 2.0 Petrol 200 gets 197bhp, while the quicker 2.0 Petrol 280 gets 276bhp and is only available in Veloce trim. The more powerful engine takes just 5.7 seconds to accelerate from 0-62mph, but both engines need to be worked hard to show their true muscle. Neither of these engines make the Stelvio feel as fast as the on-paper numbers suggest, and this detracts from the feeling of sportiness. We’d stick with the diesels, and because you can only get the 207bhp version in pricey Veloce trim, the 187bhp is the pick of the range.

However, it’s a different story entirely if you’re considering the other petrol engine: a stonking 503bhp 2.9-litre V6 that’s fitted exclusively to the Stelvio Quadrifoglio, which we’ve reviewed separately.

With so much talk of the Stelvio being designed to out-handle the opposition, it shouldn’t be a great surprise to find that it has a rather firm ride. Although it never bangs or crashes over potholes or big road imperfections, it does feel quite unsettled at low speeds – you’ll feel yourself being jostled around in your seat. At higher speeds, however, the sports-oriented suspension set-up is better, dealing with crests and compressions with a fluency and finesse that is usually reserved for the best sports saloons.

However, rivals offer better ride comfort overall. An X3 is firmer but more controlled, while a Q5 can glide over surfaces that would unsettle the Stelvio.

As always, we’d suggest sticking to smaller wheels if you are looking for the best ride, and it’s worth paying for the adaptive suspension that you can have as an option on all but entry-level Super trim if smoothness is a priority. Set to its softest setting, the system absorbs a lot of the tremors that are kicked up by patchy surfaces and expansion joints – but it’s still not among the best riding cars in the class. Top-spec Veloce models get an even firmer suspension setup as standard, and we’re yet to try it. 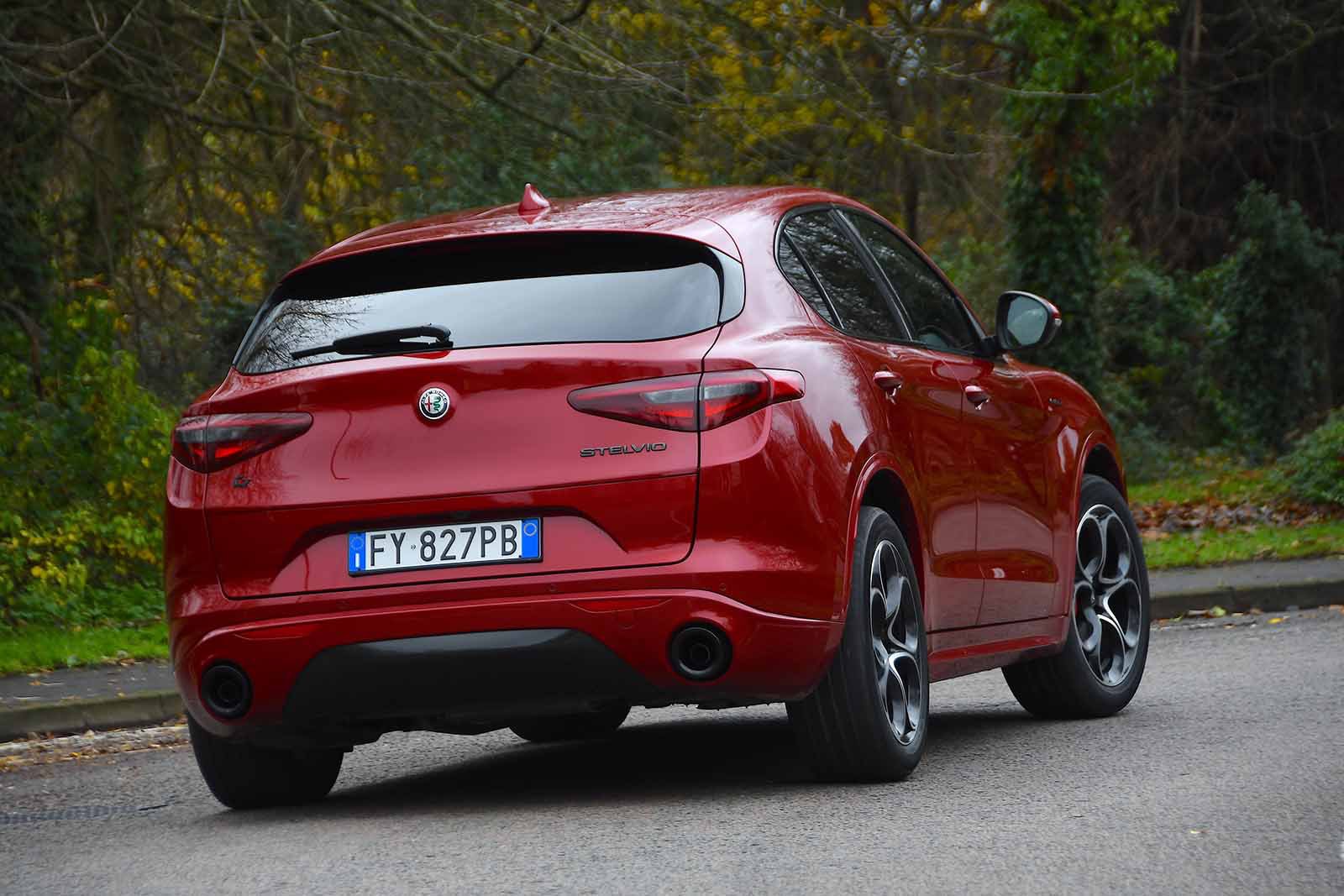 This is where the Stelvio really shines. Like the Alfa Romeo Giulia upon which it is based, the steering is remarkably direct – you have to turn the wheel very little to negotiate tight corners. However, it isn’t too light, making it easy to place the car’s nose where you want it. Combine this with the stiff suspension and plenty of front end grip, and you have an SUV that goes round corners with more enthusiasm than many saloon cars.

The Porsche Macan is the best in class in this area, but the Stelvio is as rewarding to drive as the impressive X3 and Q5, and is much more agile than the Volvo XC60. As for the Stelvio Quadrifoglio, it's one of the best handling Sports SUVs you can buy.

The Stelvio’s engines may be pretty powerful, but they aren’t particularly quiet. The entry-level 197bhp 2.0-litre petrol sounds coarse even when pootling along and fails to sound at all sporty. If you take the higher-powered 2.0-litre near its rev limiter, it does develop a slightly raspy tone, but, when you’re driving it normally, it too is pretty unremarkable.

As for both of the 2.2-litre diesels, you’re always aware of that gritty dirge that traditionally blights cars fuelled from the black pump – the diesels available in the X3 and Q5 are far more refined. Road noise is more obtrusive in the Stelvio than it is in the Q5, too, while the mirrors whip up some wind noise around the front pillars.

Every Stelvio has an eight-speed automatic gearbox as standard. Unlike the slightly hesitant gearbox in the Audi Q5, the Stelvio’s reacts more immediately when you want a sudden burst of acceleration. You can also alter the urgency of its gearshift via the driving mode selector in the centre console, with ‘Dynamic’ offering the sportiest mode. It can feel a little jerky on downshifts at lower speeds, though, regardless of which mode you’re in.