You’re unlikely to have much difficulty getting comfortable behind the wheel of the A-Class. The steering wheel has plenty of reach and rake adjustment, and the driver’s seat, which adjusts manually on all trim levels, supports you in all the right places. The sports seat, fitted to AMG Line trim, is our favourite for all-round comfort, though, and even though it doesn't come with adjustable lumbar support as standard, there’s plenty of lower back support. If you do want adjustable lumbar support or electric seats, the bad news is they're part of the mega-pricey Premium Plus Package.

The most regularly used dashboard buttons are easy to operate, but the touchpads on the steering wheel (used to flick through the digital displays) are a little fiddly to operate at first. All versions come with a 7.0in digital instrument cluster, but if you add the Premium Package, that's enlarged to 10.3in. When combined with a larger infotainment screen (see below), both appear like one giant widescreen that stretches across more than half the width of the dashboard.

All-round visibility is pretty good in the A-Class. The windscreen pillars are relatively thin, so you can see around them easily enough in tight corners, and only the over-the-shoulder vision could be described as iffy. To help remove any guesswork when manoeuvring, all models come with a reversing camera as standard, but you’ll need to add the Executive Pack if you want front and rear parking sensors.

If you drive frequently at night, it’s worth going for the mid-range Sport trim, which has more powerful LED headlights. Adaptive LED headlights, which can remain on main beams without blinding other drivers, are part of the Premium Plus Package. 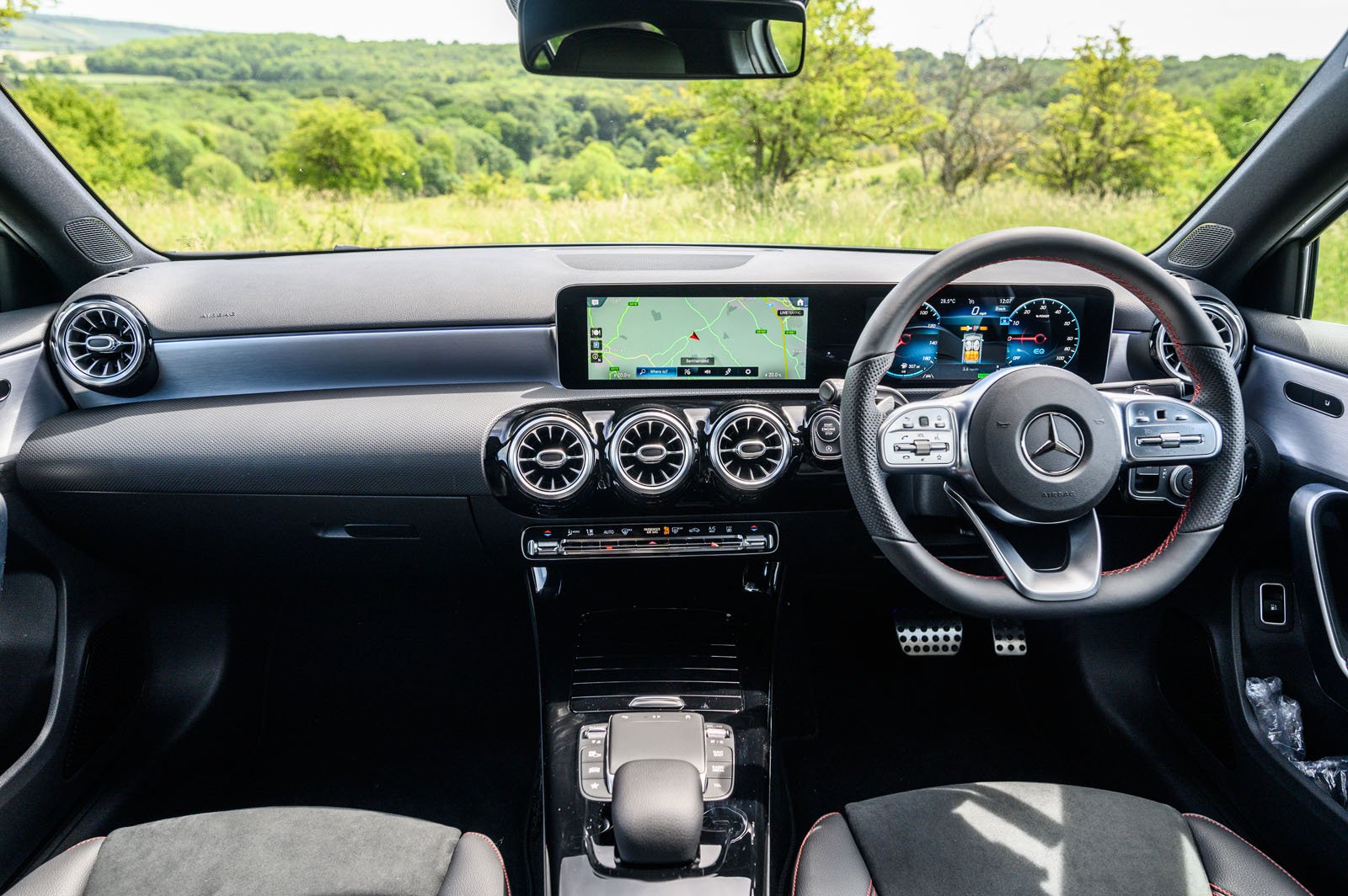 When it comes to infotainment technology, the A-Class is right up there with the current BMW 1 Series on feature count. All versions have at least a 7.0in touchscreen, with sat-nav, a DAB radio and a couple of USB sockets included. However, we'd be tempted to upgrade to the optional 10.3in screen that comes with the Executive Package (available from Sport trim), because it also includes wireless phone charging and Apple CarPlay/ Android Auto smartphone mirroring.

Using the touchscreen is fine if you're parked, but while driving it's less distracting to use the A-Class's touchpad between its front seats, or the tiny touchpads on its steering wheel. These aren't quite as easy to use as the BMW 1 Series' iDrive rotary controller, but once you get used to them, they're far safer to operate than the A3's touchscreen-only system. The menus are reasonably well laid out and the software is pretty quick to respond.

As in the 1 Series, you also get a Siri-style personal assistant as standard. To wake it up, you say "Hey Mercedes" and then, in theory, use normal speech to control various aspects of the car, from the sat-nav to interior temperature. It’s fun to use and mostly gets things right – but less so if someone else is talking in the car.

An interesting option is something Mercedes calls ‘augmented reality navigation’. It is, in effect, a live camera feed of the road ahead overlaid with sat-nav instructions, including house numbers, road names and direction arrows. You need to upgrade to the Premium Package to get it (available on AMG Line trim); this also gets you a punchier stereo.

If there’s one thing about the A-Class that we'd award a straight 'A' for, it’s the look of its interior. It’s flamboyant and more in keeping with what you’d expect to find in a luxury saloon than a family hatchback, including lashings of shiny black plastic, leather, wood and metal inserts.

The jet-style air vents, borrowed from the E Class Coupé, also help lift the overall impression above most other premium-badged rivals, especially when they glow like afterburners at night. So, visually, this interior eclipses all others, including the Audi A3, BMW 1 Series and Lexus CT.

However, where the A-Class falls down a little is its outright build quality. There are a few suspect bits; for example, the climate control panel flexes when you press a button, while the outer heater vent surrounds don't appear to be very well secured in place. These aren't things you'll notice in the 1 Series, which feels much more robust; because looks are subjective but build quality can be measured, that's why the 1 Series gets an extra star for quality.