You’re unlikely to grumble about space in the front, even if you tower over most of your friends and colleagues. The seats slide back a long way and there’s plenty of head room, although not quite as much as you'll have in the 1 Series. It's worth bearing in mind that if you add the optional panoramic roof (part of the Premium Plus Package), it does reduce head room by about 6cm.

The door pockets are big enough for a couple of 500ml bottles of water and there are two suitably deep cupholders in front of the infotainment touchpad, as well as a decent glovebox and storage under the large centre armrest.

Anyone over six feet tall won’t exactly be sprawled out in the back, but neither will they be packed in with knees tucked up under their chin. Put simply, the A-Class is better than average for rear seat space and roughly on a par with the Audi A3. The BMW 1 Series and Volkswagen Golf are a little bit bigger. Just remember that, if you can live without a premium badge, there are far roomier family cars out there, including the Ford Focus, Seat Leon and Skoda Octavia.

The A-Class has a lower hump running down the centre of its floor than the Audi A3 and BMW 1 Series, though, so a middle rear passenger has more foot space, and it's just as wide as the 1 Series, so they're treated to competitive shoulder room. Mind you, getting in through the A-Class's tighter rear doors is more of a struggle. You'll need to stump up for the optional Premium Package if you want your rear passengers to benefit from a centre armrest; that's a curious omission on such a premium car, but something you also have to add to the BMW 1 Series. 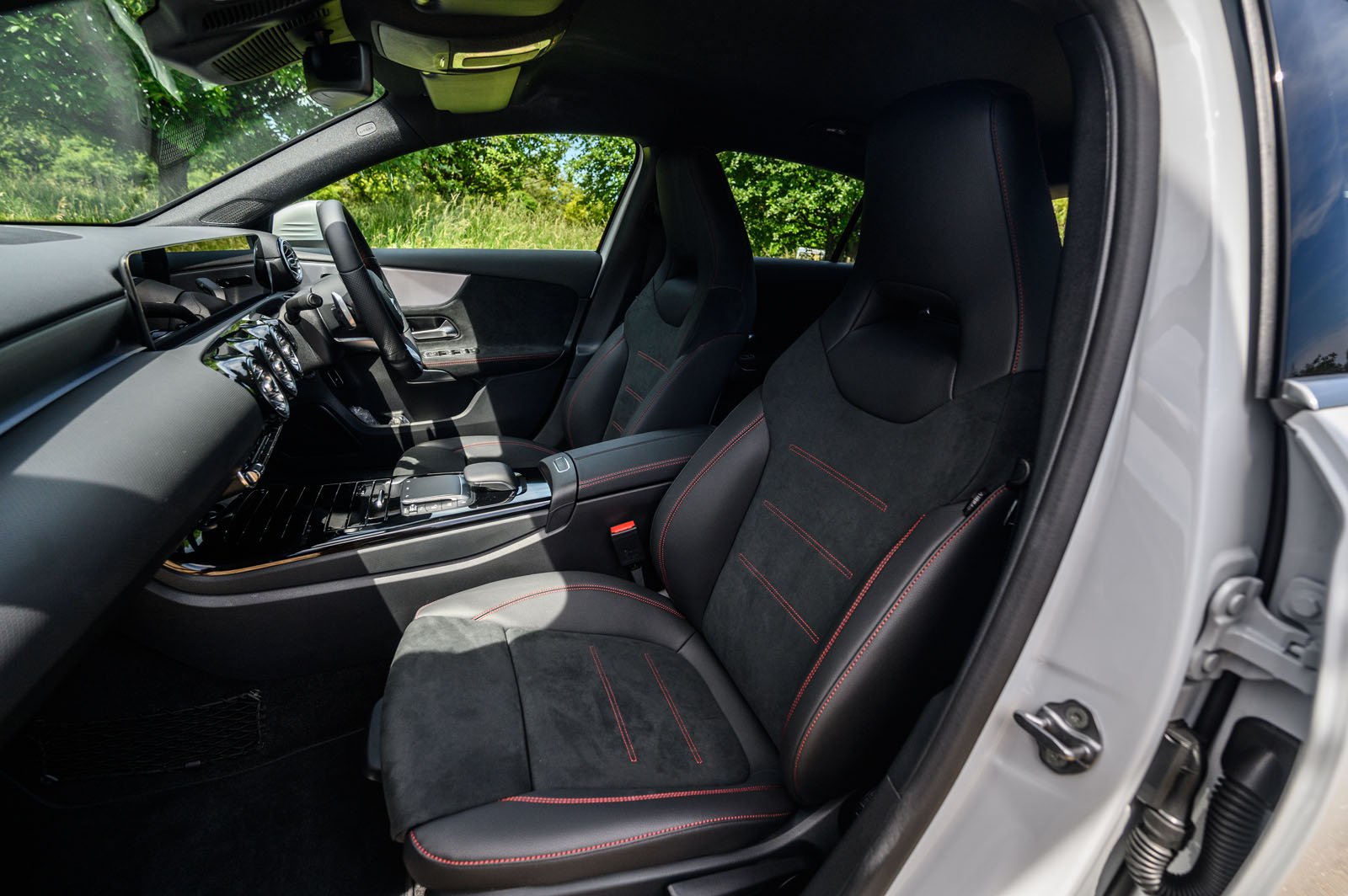 Electric front seats (with lumbar adjustment and a memory function) are available as part of the very expensive Premium Plus Package. In their absence, the front passenger gets a manual seat with fore, aft, backrest angle and height adjustment. The seat squab can also be lengthened for better under-thigh support.

There’s nothing spectacular about the boot of the A-Class, although it’s spacious enough for a big weekly shop or a weekend away in the country. And in our practicality test, it beat the A3 and 1 Series for boot space, swallowing six carry-on suitcases below its parcel shelf to its rivals' five. The A250e plug-in hybrid's boot is a little smaller, though; blame the space taken by its hybrid battery. Still, it managed to take five carry-on cases, providing a bit more space than its A3 TFSIe and Golf GTE rivals.

Drop the split-folding rear seats and you end up with a large, flat, extended load space. However, the lip at the boot's entrance is a bit annoying; it creates an obstacle to heave heavy items over. Rivals, such as the A3 and Golf, have a height-adjustable boot floor to mitigate this, and it’s a bit of a shame the A-Class doesn't offer the same feature. At least the A250e’s higher boot floor almost eradicates this lip, making for easier loading and unloading.