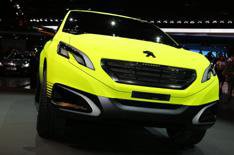 This is the Peugeot 2008 Concept, a concept car that made its debut at the 2012 Paris motor show. A production version will go on sale in autumn 2013.

Apart from a different colour scheme, the 2008 Concept is all but identical to Peugeot's Urban Crossover concept car, which was revealed at the 2012 Beijing motor show.

The 2008 is based on the Peugeot 208 supermini, and will be a rival for compact SUVs such as the Nissan Juke, Skoda Yeti and Vauxhall Mokka. At 4.1 metres long it's the same length as a Juke.

A distinctive colour scheme has been used for the Paris show car, with a combination of fluorescent yellow and matt black paint.

Power comes from the same three-cylinder petrol engine that's available in the 208. The production model is expected to be available with the same range of engines as the 208, in front-wheel-drive only.