The Suzuki Swift SHVS 4x4 is an oddity in the small car class, offering a modicum of off-road ability thanks to four-wheel drive. We’ve driven it on and off road to find out what it’s like...

Mars bars. Parking spaces. Life savings. Everything seems to be getting smaller. Often that means skimping on luxuries or cutting corners to make things fit, but in the case of the Suzuki Swift SHVS 4x4, the old adage of “bigger is better” might not be true.

The Swift competes with small hatchbacks such as the Ford Fiesta and Skoda Fabia, but with the addition of four-wheel drive, it also faces up to the likes of the smaller Fiat Panda Cross and the larger but cheaper Dacia Duster 4x4 SUV.

The Swift 4x4 uses a 1.2-litre petrol engine, which is assisted by Suzuki's mild hybrid SHVS system (that's Smart Hybrid Vehicle by Suzuki, of course), and a four-wheel-drive system named Allgrip. In short, if you want a small car with a few luxuries and a modicum of off-road ability, it's one of the very few choices you have.

There's only one combination of engine, gearbox and trim level: the mild hybrid 1.2, a five-speed manual gearbox and range-topping SZ5. As such, it is a little expensive, but is still cheaper than the range-topping automatic model.

The Swift 4x4 doesn't have the mud-plugging credentials of the Suzuki Jimny, but it does get a raised ride height to help you take on mud, snow and other slippery surfaces. It misses out on features such as Hill Descent Control or a low-range gearbox, but its petite dimensions mean you can take it down tight tracks with ease.

So, does it provide a good compromise between off-road capability and urban driving, or is it just a high-price oddity? 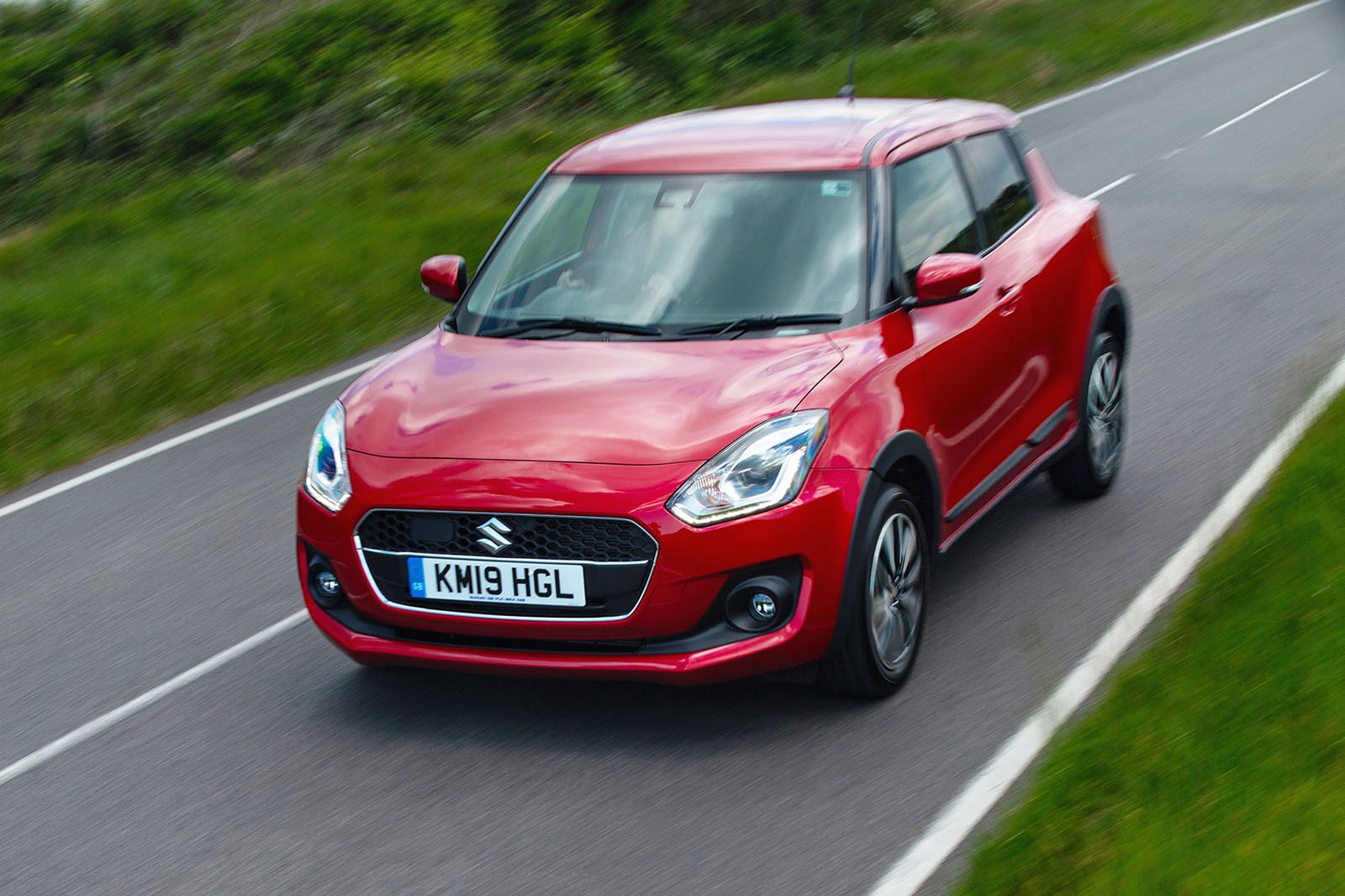 Suzuki's 1.2-litre Dualjet petrol engine makes only 89bhp. That might sound a little weedy for trying to shift the Swift up a muddy hill, but it’s actually more than up to the job whether you’re on tracks or Tarmac.

Although it can't match the low-down pull of a diesel or turbocharged petrol engine, like you get in the Volkswagen Polo, the mild hybrid system does boost torque, meaning there’s enough oomph that going for a small gap in traffic isn’t stressful. In fact, the Swift is even punchy enough for you to consider a B-road overtake. In short, it’s as good as you could hope for in a car with a power output this low.

The main benefit of SHVS, however, is the improvement on fuel economy; in our True MPG tests, the similar-sized Suzuki Ignis got 9mpg more with it than without.

The Swift 4x4 may be available with only a manual gearbox, but that's no bad thing, because it has a short and positive throw that makes shifting enjoyable.

The engine, meanwhile, is refined even when accelerating up to motorway speeds; it rarely sounds strained, even when ploughing through a particularly muddy trench. Wind noise is more noticeable, though, and the large door mirrors whip up some wind whistle.

Off road, the four-wheel drive system copes well with rutted mud tracks and deep puddles and has no problem pulling the car up steep, wet and uneven slopes. Naturally, the limited ground clearance can lead to the odd scuffing and scraping over bigger obstacles, but all in all, you’ll be surprised at how capable the car is on a British Safari.

What's more, wheel arch extensions, more rugged-looking side skirts and door-protecting body mouldings can be added for not that much money. Just bear in mind that the Dacia Duster 4x4 and Fiat Panda Cross can still put on a better show, thanks to more sophisticated rear suspension, greater ground clearance and even better body protection.

Although you wouldn’t call the Swift 4x4's ride downright uncomfortable, it isn't as plush as the Polo's nor as composed as the Fiesta's. Even the raised ride height can’t stop the car thudding through potholes, especially around town. At least the larger 16in wheels of the 4x4 don’t have too much of a detrimental effect. The four-wheel drive mechanicals add only 90kg, meaning the car still weighs less than 1000kg – significantly less than many front-wheel-drive rivals.

You’ll notice this in the bends, with minimal body roll making the Swift nimble and easy to control. There’s plenty of grip, too, so you can throw it into corners with confidence. The steering is a little light, but that makes it perfect for manoeuvring around town and tackling tight corners on a wooded track. It does weight up when you're driving faster, but it still isn’t as reassuring as the Fiesta's.

The Swift 4x4 is officially capable of 49.7mpg, and we managed to achieve this bang-on during a mix of our high-revving off-roading and regular town driving. 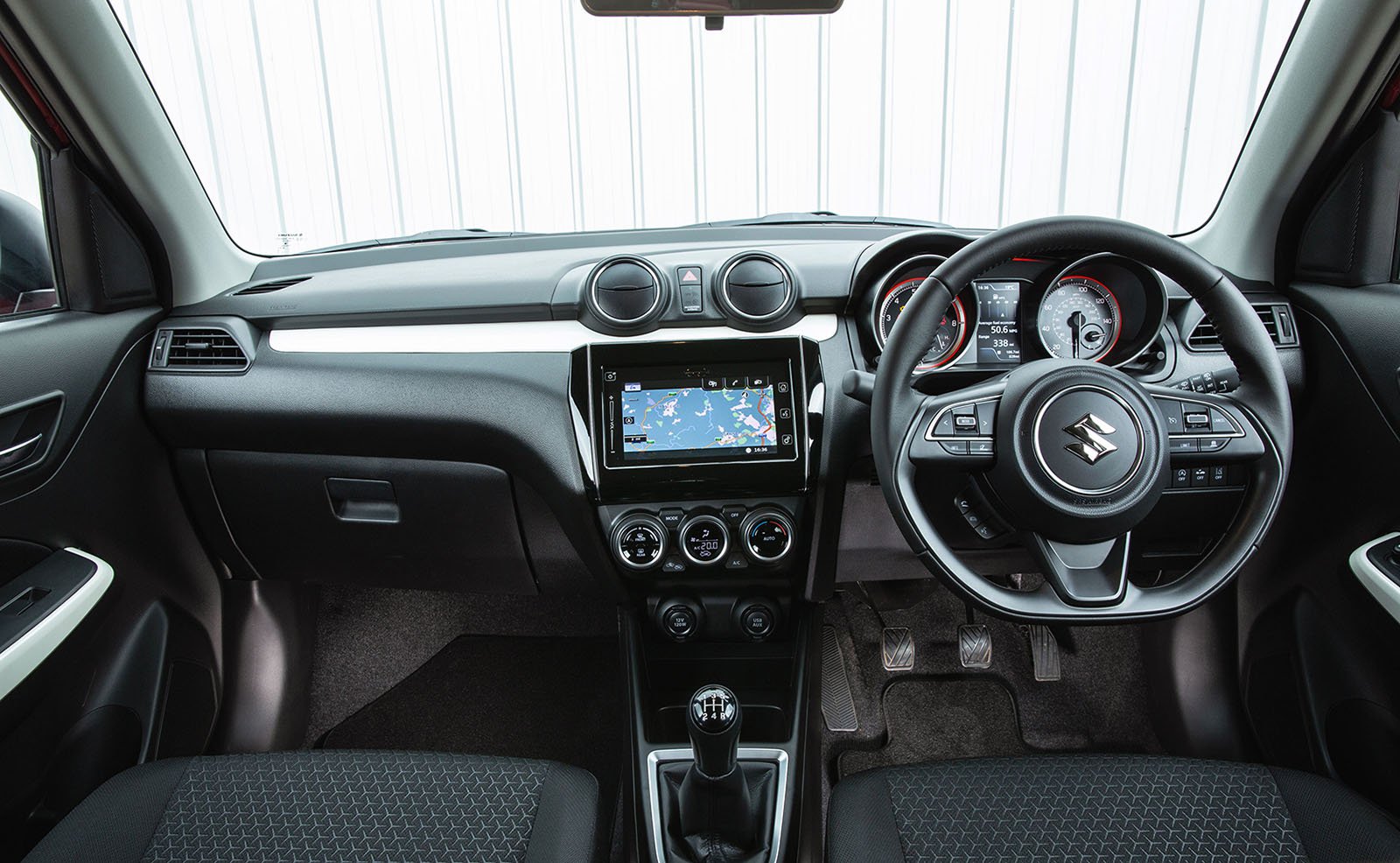 Small on the outside and big on the inside; it’s a winning formula that Suzuki does very well. Although adjustable lumbar support isn't available (this is standard on pricier Fiestas), there’s enough movement in the seat that most drivers will be able to get comfortable. SZ5 trim adds reach adjustment for the steering wheel; lesser Swifts get height adjustment alone.

The dashboard is neatly laid out but feels a little cheap compared with rivals'. There are no soft-touch materials, while particularly scratchy surfaces can be found on the doors. Coloured plastic accents brighten things up a bit, though.

Forward visibility is good, thanks to a tall windscreen and slim pillars, but the view over your shoulder is more limited due to smaller rear windows. At least a rear-view camera is included on SZ5 cars, although acoustic parking sensors aren't available on any Swift.

There's plenty of head room in the back, while even taller passengers won’t find their knees brushing against the front seats when sat behind an equally tall driver. It’s much comfier than the Fiesta, but there's more space in the Polo and Seat Ibiza. Fitting three across the rear would be a struggle, too.

The boot is more of a letdown; it’s smaller than that of the Fiesta and Skoda Fabia. We managed to fit in four carry-on suitcases, while the rear bench split-folds 60:40 as standard.

There's plenty of tech included on the Swift SHVS 4x4. The touchscreen infotainment system is basic but quite laggy and has outdated-looking graphics. It does, however, include sat-nav, a DAB radio, a CD player, Bluetooth, USB and an Aux-in. Crucially, it also has Apple CarPlay and Android Auto, so you can avoid using Suzuki’s software entirely.

Other goodies include adaptive cruise control, keyless start and heated door mirrors, while SZ5 is the only trim level that includes automatic emergency braking.

For more information about the interior and discussion on the rest of the Suzuki Swift range, read our full 16-point review here.

Car of the Year Awards 2021: Best small SUV for value