If you want something outrageously fast but still need space for your family and their paraphernalia, the Porsche Cayenne Coupé Turbo GT has you covered. So is it the best sports SUV you can buy?...

We get that the Porsche Cayenne Coupé Turbo GT is an acquired taste for some, if not many. Objectively, it's an obscenely weighty sports SUV powered by a consumptive petrol V8 and spits out enough emissions to see a family of polar bears wince. And yet, there still seems to be a logical case for it.

If you happen to have the wherewithal to be able to buy an exotic sports car, you might well be at the stage in life where you have responsibilities (such as children) that put most traditional choices out of the question.

That's where this mouthful of a car comes in. The Cayenne Coupé is already the sportier form of the Porsche Cayenne and it's fitting that the sportiest Cayenne comes in the most powerful form. Its rivals include the Audi RS Q8 and Lamborghini Urus – both of which use the same underpinnings as the Turbo GT.

The Cayenne Turbo GT is far more than a cynical fast SUV with the boost turned up, though, because there have been extensive suspension, engine and software changes to make for what promises to be the most capable sports SUV ever made. But is it? 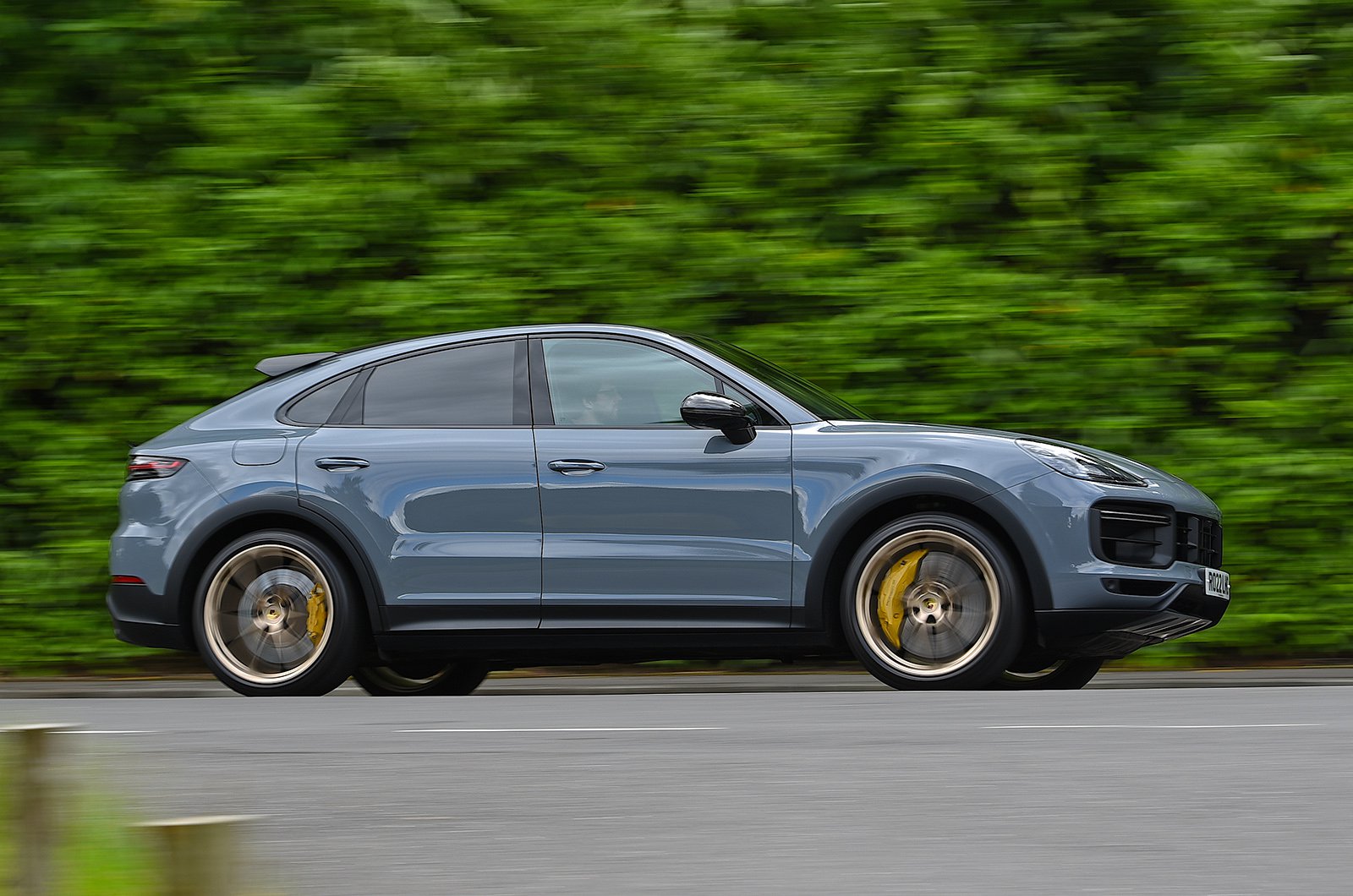 With such a smorgasbord of changes, it's hard to know where to start, but let's begin with the engine. Yes, its twin-turbocharged, 4.0-litre V8 petrol is similar to what you'll find in the regular Cayenne Turbo, but many of its components have been honed for the Turbo GT. As a result, power increases from 542bhp to 631bhp, reducing the 0-62mph time from 3.9sec, to 3.3sec. That time means it's even quicker than the Porsche 911 GT3.

As you'd anticipate, its lightning fast acceleration means you only need a short stab of the accelerator pedal before you meet the legal speed limit. The eight-speed PDK automatic gearbox rifles through the gears faster than you can perceive them – the major clue being the changes in the engine's bassy tone exemplified by the standard titanium exhaust. Few other four or five-seat passenger cars this side of a Porsche Taycan Turbo S or Tesla Model S Plaid (both electric cars) can get you up to speed faster than this.

The driving experience can be a bit hard to pin down. That's not to say the Turbo GT is lacking in finesse. Like a swan gliding across a lake, the Turbo GT gracefully carves through turns as quickly as the fastest hot hatches. But there's so much going on underneath you that you have to dissect the spec sheet after a blast to work out what was going on. 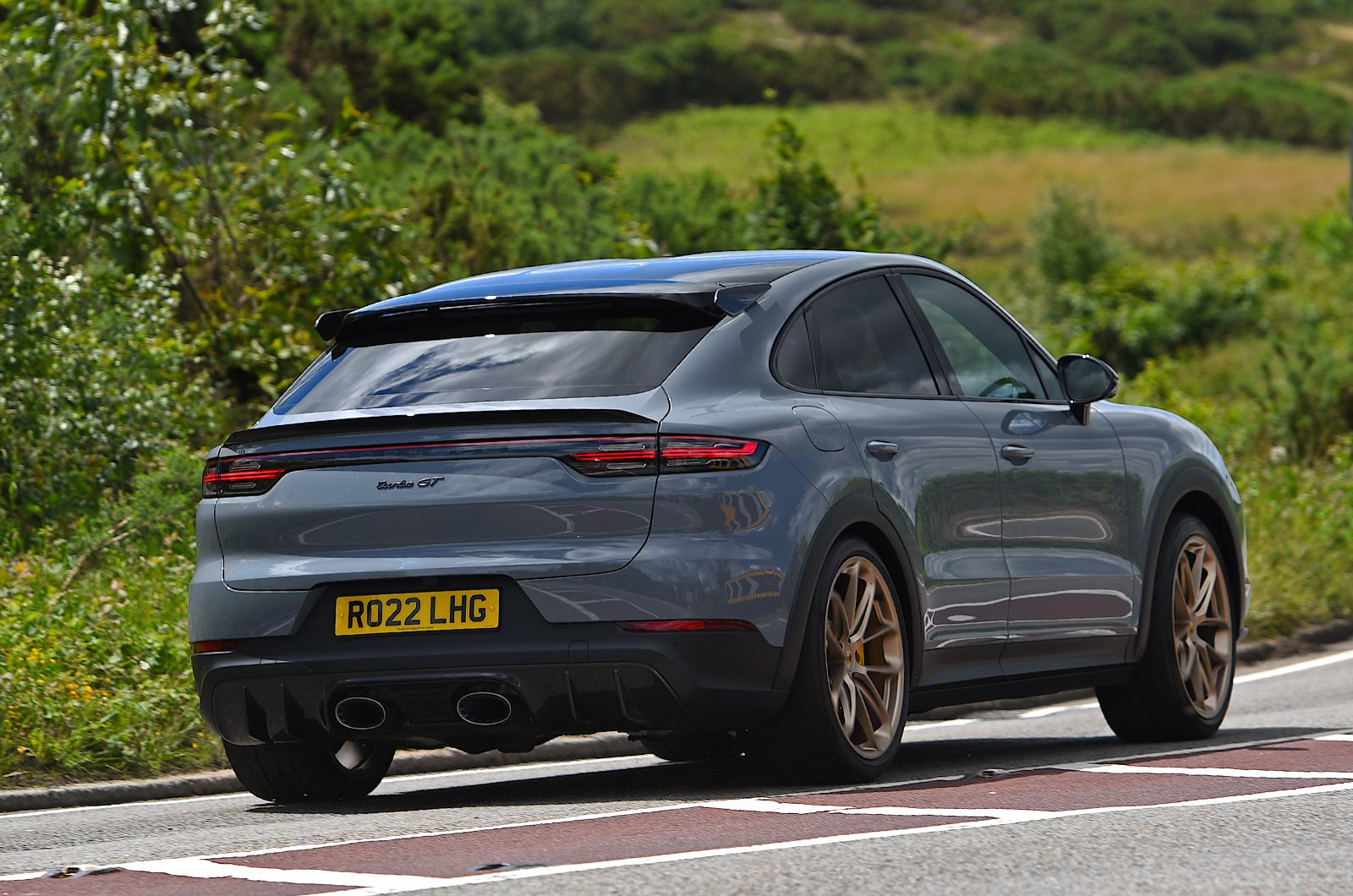 When manoeuvring at low speeds, the steering is reasonably light and the car turns quickly thanks to its four-wheel steering system. The rear wheels turn up to three degrees in the opposite direction to the fronts, helping to reduce the overall turning circle.

At higher speeds, the steering weight increases and that rear axle steer turns the rear wheels in the same direction as the front, so instead of just the front wheels turning the car, the whole thing moves as one in a sort of crabbing motion. This increase in stability is really welcome on a motorway during lane changes because all you need is a small amount of input on the steering wheel to move the car.

When you go into a corner thinking this tall 2.2 tonne SUV is going to lean over on to its door handles, the Porsche Dynamic Chassis Control (PDCC) system counteracts this force by stiffening the suspension, keeping things level. It's so effective you end up berating yourself for being relatively gentle to begin with, and then you attack the next bend with the same alacrity you would in a hot hatch. When the roads straighten up, the air suspension can slacken things off to provide a comfier ride.

Not only do the Cayenne Turbo GT's massive ceramic brake discs resist fade (due to heat) better than a cheaper steel alternative, but the stopping power available means it can slow you down as quickly as it can accelerate. Pedal feel is firm and very easy to modulate at slow speeds, despite the ferocious slowing potential they have. Of course, much of that wouldn't be half as effective were it not for the phenomenal grip provided from the Pirelli tyres. 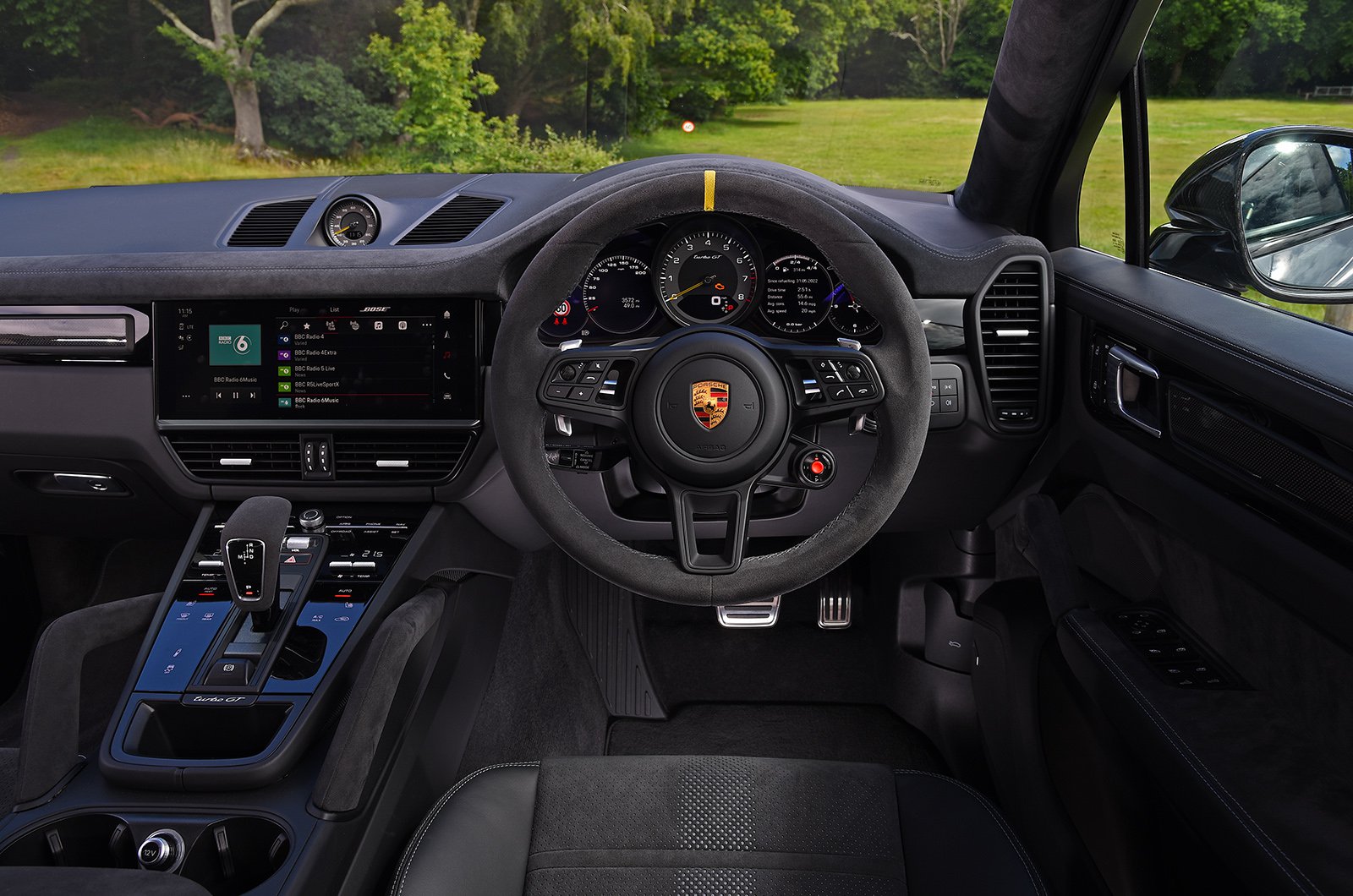 As standard on the Turbo GT you get the Sport Chrono package, which among other things gets you a nice analogue clock that sits on the dashboard. There's also standard suede-like trim for the seats, steering wheel (complete with 12 o'clock marking) and various other interior touch points. If you don't fancy such trim and fear it'll lose its lustre after a while, you can option a leather alternative instead.

Our Turbo GT model also came with some carbon trim pieces, but they looked a bit tacky and seemed stuck on beside the gloss-black trim of the dash and door cards. They were the only bits of the interior that looked cheap. The Porsche options list means you can change them for leather or aluminium – at a price.

Thankfully, passenger space isn't at all affected by all the performance modifications compared with the regular Cayenne Coupé, so there's still plenty of room for five adults and their luggage. You can read more about that in our full Porsche Cayenne Coupé review.