The Alfa Romeo Stelvio is the Italian brand’s first ever SUV, and a rival to models such as the Audi Q5, BMW X3 and Jaguar F-Pace. So, what’s it like to live with?...

1 January – good and bad, but certainly not ugly

‘Check engine’. The words suddenly appeared in the Stelvio’s instrument cluster, accompanied by a bong (and a sinking feeling in my stomach). And while the car didn’t go into limp home mode or show any other signs of being on the verge of mechanical failure, I heeded the warning and called Alfa assist.

The auxiliary water pump was blamed, and the Stelvio was back from the service centre after just a couple of days. But a few weeks later there was the message again: ‘Check engine’.

This time I was told there had been a misdiagnosis previously, and that an under-reading temperature sensor had actually been at fault all along. However, even though Alfa Romeo says it’s sure it’s now solved the problem – and it appears to have been something relatively minor – this is the sort of incident that shakes your confidence in a car. Indeed, it was with some apprehension that in the wake of it I set off from London for the Ribblehead viaduct (a 540-mile round trip) to take part in a video shoot for the 2019 What Car? Car of the Year Awards.

The idea of being left stranded by the side of the road, half a country from home, obviously didn’t appeal. And even without any reliability concerns, I wouldn’t have expected the Stelvio to be particularly suited to such a long, motorway-dominated journey, given its sporty character. Yet I ended up with a whole new respect for it.

For starters, the heavily bolstered front seats may look like they were designed for cornering rather than comfort, but lumbar adjustment is standard, and even after spending most of the day behind the wheel, I remained completely free from back ache.

Similarly, while the suspension is on the firm side, the car never bangs or crashes. In fact, it deals with high-speed crests and compressions with a fluency and finesse that is usually reserved for the best sports saloons. Even the 2.2-litre diesel engine, which can be rather coarse, settles right down once you’re up to cruising speed.

What’s more, the user-friendly infotainment system allowed me to switch between albums on my iPod without having to take my eyes off the road, and when it was finally time to turn off the motorway, I was able to really enjoy the winding roads of North Yorkshire, thanks to the Stelvio’s sharp steering and tight body control.

Some 14 hours after first setting off, I stopped for fuel a few miles from home, and the man parked at the next pump called out: “Nice car, mate.” You get this a lot with the Stelvio, thanks to its striking looks and comparative rarity. And despite some lingering concerns, overall I’d agree with the sentiment. 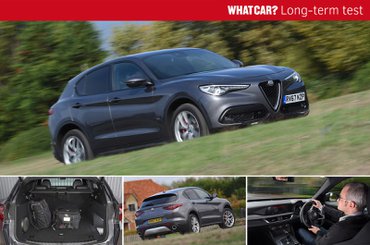 The Alfa Romeo Stelvio is the Italian brand’s first ever SUV, and a rival to models such as the Audi Q5, BMW X3 and Jaguar F-Pace. So, what’s it like to live with a used example?