Citroen C4 to get face-lift 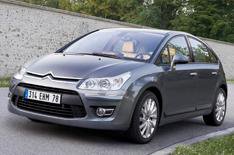 The Citroen C4 hatchback and coupe have been given a face-lift, with the most significant changes occurring to the engine range.

Both engines have been developed in conjunction with BMW with the goal of returning better fuel efficiency without compromising performance.

The 118bhp unit returns an average of 42mpg, an increase of six per cent, while carbon dioxide output is cut to 159g/km from 169g/km.

The 148bhp engine provides a 10 per cent increase in average fuel economy at 41mpg and a reduction of emissions to 164g/km.

The 2.0-litre diesel has also been revised to comply with Euro 5 standards.

All of the diesel engines in the C4 have improved fuel economy, with both the 91bhp and 108bhp 1.6-litre diesels dropping below the 120g/km emissions mark with outputs of 117/gkm and 118g/km respectively.

Subtle interior and exterior styling tweaks have also been made to the car. Most noticeably, the rev counter has been relocated to the central dashboard display from its original place over the steering wheel.

Prices will be confirmed nearer the car's launch later this year.