Want a fast but frugal load-lugger? Ford's new diesel Focus ST Estate and the Peugeot 308 SW GT have plenty of appeal, but can they beat the excellent Seat Leon ST FR?... 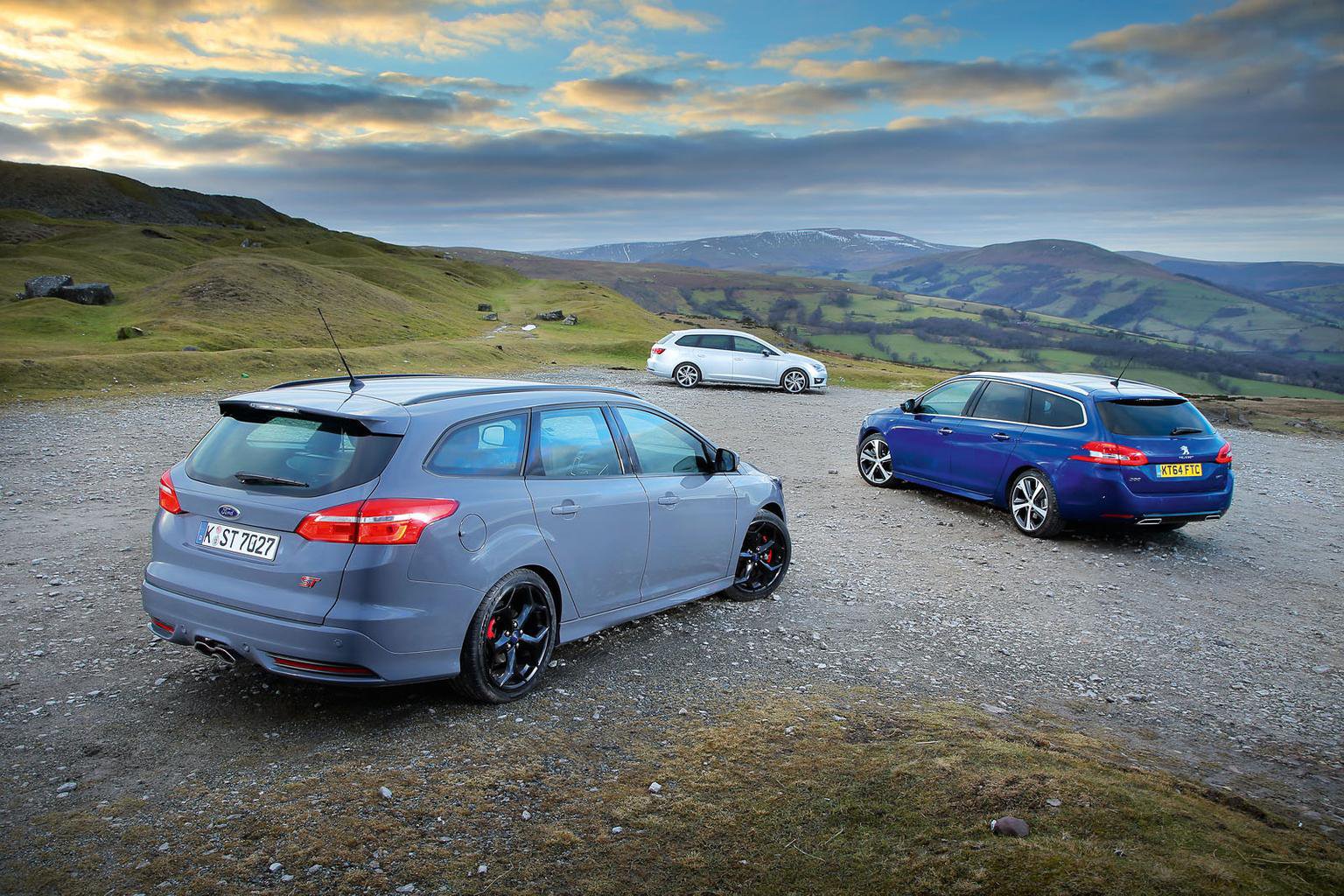 Looks like it could set the standard for fun, but it'll need to excel in other areas to win here

Can a standard automatic gearbox and a high kit list justify the price, and can it live up to the sports billing?

Wades in with the lowest price, and what we know is a decent estate. It could represent the happy medium.

Fast diesel estates face a tricky balancing act. They have to be fun, but they can’t be so hardcore they fail to meet the demands of those who need an everyday family car with a big boot.

At first glance, the new Ford Focus Estate ST would appear to have fun at the top of its priorities. That ST badge has historically been associated with hardcore hot hatches, and here it’s combined with aggressive styling. For all that, the 182bhp 2.0-litre diesel engine should also keep a lid on running costs.

The Seat Leon ST and Peugeot 308 SW both look less overtly sporty, yet have similar power and on-paper pace. The only glaring difference between the three is cost because the Peugeot is vastly more expensive than the others. That can at least be partly explained by the fact it has a standard six-speed automatic gearbox, whereas the Ford and Seat get six-speed manuals as standard.

If fun is your first priority then look to the Ford. Its quick and well-judged steering offers a rewarding level of feedback, there’s barely any body lean through bends and there’s a general playfulness to the handling. Swing the ST briskly into a corner and you’ll enjoy a sharp turn-in and keen front-end bite, making the Ford feel remarkably poised for an estate.

It isn’t without issues, though, chief of which is a shortage of traction. Even relatively gentle acceleration can have the front wheels scrabbling for traction out of a corner, with the steering wheel writhing in your hands – a habit which is exacerbated by an engine that delivers its hefty surge of pulling power in one big dollop when the turbo kicks in.

By contrast, the 181bhp Seat feels more composed if less exciting. It has steering that’s slower but more consistently weighted, a more progressive power delivery and better traction; it’s easier if less fun, to go quickly in the Leon.

The Peugeot’s small steering wheel lends a sense of dartiness to the handling, and it’s precise enough to feel satisfyingly fluid on the right road. However, the steering can get disconcertingly light mid-corner, and the 308 also has looser body control than the other two.

The standard six-speed automatic gearbox dominates the Peugeot’s performance; it does an adequate job when you’re just going from here to there because the lazy, but smooth, shifts keep the 178bhp engine in its muscular mid-range. The problem comes when you want to have fun; the gearchanges are still slow even if you use the paddles.

Sadly, the Peugeot’s ride could also be better. There’s lots of patter around town, and mid-corner bumps are often jarring; the response is sometimes so bad that the whole car skips sideways. The Ford is far more composed over mid-corner intrusions, although the firm set-up has the body bobbing about most of the time on the motorway. It’s easiest to relax in the Seat because it has the most forgiving ride on all roads.

The Peugeot is the most refined; road and engine noise are kept firmly in the background, although our test car’s £500 glass roof elicited a lot of wind noise. Both the Seat and Ford suffer plenty of road noise at faster speeds, although the Leon’s gruffer engine note makes it fractionally the noisiest here.

All of these cars have heavily bolstered sports seats, which are comfortable enough even on
long trips. The Ford has the most figure-hugging seats, which offer lots of support around the shoulders as well as the sides, but the ST makes do without the adjustable lumbar support that’s standard on the other two.

The Peugeot has the least front headroom, and its brake pedal is offset slightly to the left, which some drivers will find a touch irritating. So, overall, it’s the Seat that has the best driving position, thanks to its broad range of seat and steering wheel adjustment, good pedal placement and the best all-round visibility.

The Leon has the most straightforward dashboard, too, with a simple colour touchscreen and rotary controls for the climate control system. Meanwhile, the Ford gets straightforward air-con buttons, but neither the standard 4.2in screen nor the optional 8.0in touchscreen on our test car are particularly intuitive to use.

At least the Ford has physical controls for its climate controls system, whereas the only way to tweak the cabin temperature on the Peugeot is by using its giant 8.0in colour touchscreen. It’s a faff because the screen is often slow to respond to presses, and you have to first switch to a specific menu – which is a pain if you’re listening to the radio or using the sat-nav.

All three cars have hard, raised cushions on the middle rear seat that’ll make life uncomfortable for whoever draws the short straw whenever you need to travel five-up. The Seat offers the most rear passenger space while the Peugeot is very tight for headroom (no thanks to that optional panoramic roof) and also has the least legroom. Meanwhile, the Ford’s chunky front seats also cut into rear legroom a bit, but six-footers will be comfortable.

The 308 might not have much room for people, but it has plenty of space for stuff; its boot is the biggest here in almost every direction. It also comes complete with rear seats that can be folded by pulling levers on the sides of the boot (also a feature in the Leon), although it’s a shame the Peugeot misses out on the height-adjustable boot floor that the Seat gets.

Meanwhile, the Ford’s boot is the shallowest and shortest, and it’s comparatively awkward to fold the rear seats because the latches are next to the headrests, so can’t be reached from inside the boot.

There’s no avoiding the bald figures here; the Peugeot looks cripplingly expensive because, even after discounts, cash buyers will need to spend £3000 more than it costs to buy the Seat and £2000 more than for the Ford. Factor in the 308 SW’s rapid depreciation and over a typical three-year ownership period it’ll cost £5932 more than the Seat and £4745 more than the Focus.

Granted, Peugeot’s Just Add Fuel deal looks attractive; for £411 a month you also get free insurance, servicing and road tax. Plus, it’s the only car here with an auto gearbox, although you can add a dual-clutch auto to the Seat for an extra £1350. The Ford is manual only.

The Peugeot is the priciest company car, too. Even though it’s a tax band lower than the others,
its higher list price means that, over three years, it’ll cost 40% taxpayers an extra £406 in benefit-in-kind (BIK) tax over the Seat, and £170 more than the Focus. Those looking to lease will find the Peugeot’s costs competitive with the Ford, although Seat is cheapest on this front, too.

By comparison, most buyers considering the Ford will at least want to add sat-nav (£500) and rear parking sensors (£325).

The Seat looks generously equipped, provided you include the Technology Pack. It’s officially
a £1075 option that adds sat-nav, a DAB radio and LED headlights, but Seat has offered it free on most Leons since the car’s launch in 2013, and is set to continue to do so.

The 308 and Leon have just one standard, no cost, colour: red in the case of the Seat and grey for the Peugeot. The Focus comes in red or dark grey.

This comes down to a question of priorities. You want the most fun you can have in a diesel estate? Go for the Ford. If a cavernous boot is the priority, then the Peugeot could be for you. However, if, like most buyers, you want something that’s fun, roomy, comfortable for your family, and also relatively affordable, the Seat is the best.

There’s real satisfaction to be had in threading the Leon down a winding road, while it’s also the best value on most fronts and the most relaxing for those in the back.

The Focus comes second. Its hot hatch handling gives it an edge over the Seat, but doesn’t quite make up for its overly firm ride, comparatively pokey boot, inferior rear legroom and higher price. So, while the Focus is well-suited to those willing to compromise on comfort, cost and practicality in favour of heartily entertaining back road shenanigans, it is something of a one-trick pony.

Unfortunately, the Peugeot makes little sense. It’s very expensive to buy or finance, has a relatively cramped rear cabin and is nowhere near as much fun as its two rivals. Yes, it’s really well equipped, has a smart interior and a huge boot, on top of which it’s quick enough and adequate to drive in most situations, but there’s little of the precision and composure of the Seat, and not a glimmer of the fun of the Focus.

So, while cheaper 308 SWs make plenty of sense for those willing to compromise on rear space in return for a big and practical boot, this GT version is hard to recommend.

For **Precise and composed handling; most comfortable; great value for money

Against Not as fun to drive as the Focus; gruff-sounding engine

For** Handles like a hot hatch; decent running costs

Verdict Fun, but not as well-rounded as the Seat

Verdict An unrecommendable version of a good car