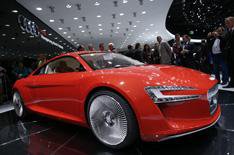 What is it?
It's a battery-powered sportscar - and what a sportscar! Just take a look at the headline stats: 0-62mph in 4.8 seconds and a limited top speed of 124mph. Pulling power is an astonishing 3319lb ft - think 10 times the torque that's produced by the V8 Audi R8. It has a range of 154 miles.

The car is powered by not one, but four electric motors - a pair on the front axle and another pair on the rear - and the lithium-ion battery pack is situated at the front.

The batteries can be charged within eight hours and Audi is developing a 'wireless' docking station - a bit like an electric toothbrush charger, but for a car!

Inside, instead of the traditional instrument cluster, the e-tron has a large, fold-out central display with integrated MMI functions. It is flanked by two round dials.

The MMI is controlled via a scroll pad with a touch-sensitive surface on the steering wheel. An analogue speedometer on the right provides speed information, the instrument on the left tells the driver how much power is being drawn.

The central display shows the range in the status bar and has all the entertainment and navigation systems.

Why is it important?
It shows that Audi is seriously developing all-electric cars. Watch this space.